With one exception, they are sermons that incite to hatred. The end of Ramadan was marked by the legitimization of Islamic terrorism in Iraq and the whole worldÂ 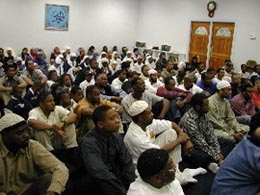 ROMA – Magdi Allam, an Egyptian who has lived in Italy for many years, is a specialist on the Arab and Muslim world. On November 30, he published an important survey in “Corriere della Sera,” the leading Italian daily, of which he is vice-director.

In the survey, he transcribes several passages of the sermons delivered by six imams of Italian mosques on November 21, the last Friday of the month of Ramadan, and on November 25, the feast of Id Al Fitr.Â The sermons given on these dates are the ones with the largest audiences; the halls are packed. Here is an anthology of them, city by city:

Amar Sahounane, from Algeria, is the imam of the mosque in the Piazza Larga al Mercato:

“Just as the Jews and Christians in the past had divine authorization for their warfare, so Muslims now have divine approval for the actions they believe opportune [i.e. the massacres in Nassiriya on November 12, and in Istanbul on November 15 and 20].

“The West is creating more victims than it did during both world wars combined. So the Muslim nation must react to defend itself.

“If there is no change in the WestÂ´s course of action, it and the Muslim countries that follow it will be struck by groups of Muslim brothers who, by now, are united beneath the standard of authoritative persons [like Osama bin Laden] well noted throughout the world and so effective at shaking up the West.”

Abdellah Labdidi, the imam of the Er Rahma mosque in Fermo, in the province of Ascoli Piceno:

“The recent attacks in Riyadh cannot be attributed to the jihad, because the mujaheddin of Al Qaeda do not kill women and children. They are the work of the CIA [Central Intelligence Agency], carried out to increase the rancor toward Muslims in Western public opinion. The infidels forcibly distort the references to jihad that are found in the Koran and are part of its diffusion, in order to incriminate the imams and blame the Islamic communities.

“But the attacks against the British, American, and Italian invaders in Iraq and Afghanistan can be attributed to the defensive jihad, because they respect the dictates of the Koran.”

Said Mahdi Nasr, and Egyptian, the imam of the El Nur mosque of the Islamic Culture Center on Via Massarenti:

“Martyrdom [of those who fight and die with Mohammed during Ramadan] has been amply rewarded by the Prophet, because these people have died for a just cause, during a period that is sacred to us, and in paradise God has filled them with glory.”

Ahmed Afilla, the imam of the Islamic Cultural Center of Pesaro and Urbino:

“Jihad is being exploited by the Western world to attack the Islamic religion. We condemn all forms of terrorism, including those that come from Western countries.

Nour Dachan, from Syria, the imam of the mosque of Ancona and president of UCOII, the Union of Islamic Communities and Organizations in Italy:

“We condemn terrorist attacks because they are part of a shameful strategy. But we ask for the immediate withdrawal of the Italian military contingent and the end of the military occupation of Iraq, which are part of AmericaÂ´s imperialistic logic.”

Mahmoud Asfa, the imam of the House of Islamic Culture on Via Padova:

“The Muslim religion is a link in a chain that binds it to the other religions. Islam preaches respect for other civilizations and cultures. Islam desires peaceful coexistence with Christians and Jews. Islam is against the terrorism of Riyadh, Nassiriya, and Istanbul. The Italian soldiers [in Iraq] are messengers of peace. Islam respects churches and synagogues in the same way that we Muslims respect the mosques.”

[At this point, approximately thirty of the faithful got up and left the room].

* * *
Apart from the last one, which is an exception, the sermons cited above legitimize Islamic terrorism in various ways, exalt the holy war and “martyrdom,” and attack the West and Israel.

Last June, similar cadences had echoedÂ
beneath the arches of the Great Mosque of Rome, funded by Saudi Arabia and other so-called “moderate” Arabic regimes. The speaker was an imam installed there by the Al Azhar university of Cairo, the most authoritative in the entire Muslim world.

On that occasion as well Magdi Allam recorded the preaching and published the most salient passages in another major Italian daily, “la Repubblica.” The president of the Pontifical Council for Interreligious Dialogue, Michael Fitzgerald, when asked about it, minimized the fact: “In the end, these things were said in just one Italian mosque. And by exaggerating local conditions on runs the risk of compromising dialogue.”

He was wrong. It was not an isolated case. The imam of the Great Mosque of Rome, Abdel-Samie Mahmoud Ibrahim Moussa, from Egypt, was later removed at the request of the Italian government. And Fitzgerald was removed from the list of the new cardinals John Paul II was preparing to nominate.

Then the highest Vatican authorities began to reach the decision to respond to the Islamic threat, no longer only through dialogue, but through confrontation. This is the position adjustment that would appear concretely in October with the publication in “La CiviltÃ  Cattolica” – which is maintained and authorized by the Holy See – of an unprecedentedly harsh article on IslamÂ´s age-old offensive against the Christian West.Â

A link to the newspaper in which the survey by Magdi Allam was published on November 30, 2003, under the title “The sermons of hatred in certain mosques”:

The previous case of the July 6, 2003 sermon in the Great Mosque of Rome:

An analysis of the official website which, from Mecca, shapes the preaching throughout the Muslim world against the West, Christians, and Jews:

The VaticanÂ´s current stance on Iraq and the Islamic threat:

Go to the home page ofÂ > www.chiesa.espressonline.it/english, to access the latest articles and links to other resources.

7 thoughts on “Magdi Allam: all except one mosque surveyed preach hatred and jihad”