Earlier today, I went through pains to rewrite this Google translation from Luc Bronner, then by chance I found the whole article on the Brussels Journal:

The French Interior Ministry has issued orders to the prefects not to communicate to the media the crime statistics for the nights of July 13-15. The cartoon at the top showsÂ Marianne, the woman symbolizing the French Republic, watching the “official” weather report, “More sun tomorrow” it says, as it pours outside.Le MondeÂ has aÂ long articleÂ about the news blackout:

[…]Â Only the figures for the night of July 13-14 were published: “Some 500 vehicles” were burned, the worst ever recorded for the eve of the national holiday. Despite repeated requests to the Interior Ministry, and the DGPNÂ [similar to the FBI],Â no figures were forthcoming for the night of July 14-15. These orders have been strictly applied. The different prefectures contacted byÂ Le MondeÂ refused to respond, citing “ministerial instructions.” Regional news media reported the same problem. The dailyLa ProvenceÂ issued an unofficial report that was much less favorable than 2008: 41 cars and a day-care center in Marseilles burned.Â […]

Other local papers describe the same problems. In Reims, the dailyÂ L’UnionÂ denounces the attitude of the authorities: “Yesterday morning, every journalist who came, even for the smallest piece of news, to the firemen, or gendarmes or police, heard the same answer: ‘No fires’. In fact, the truth is quite different. Some of those we questioned admitted under their breath: ‘We cannot say anything about the fires. We have received orders.” In Lyons, the dailyÂ Le ProgrÃ¨s reports the same blackout: “Orders not to speak on the radio were given to firemen, gendarmes and police.”

In previous years the radio networkÂ Europe 1Â had systematically called the prefectures to verify the official counts. On January 1, 2008, the DGPN reported 372 burnt cars for New Year’s Eve vs 746 reported byÂ Europe 1. Finally the ministry of the interior admitted that there had been 878 fires. “Instructions” given to the prefectures henceforth forbid this type of verification.

Some bits of news have leaked through. AnÂ articleÂ at the conservative blogÂ FranÃ§ois DesoucheÂ (based on aÂ reportÂ in the newspaperÂ Le Parisien) describes the use of firecrackers against the police, in the suburb of Tremblay-en-France, department of Seine-Saint-Denis. This was the second time in a few weeks that police on patrol were drawn to a group of youths. Masked by their clothing they threw firecrackers and rocks at the police.

Also, in the city of Evry, four or five large packs of firecrackers were stolen by a group of hooded individuals who broke into the fair grounds thanks to the inadequate number of guards. AgnÃ¨s Moutet-Lamy, the spokesman for the Socialist mayor made light of the event: “That can always happen. There’s nothing to worry about.” However, Jean-Charles BÃ©raud, an expert in pyrotechnics, stated that firecrackers “can become a monstrously dangerous weapon. A mortar can be propelled 120 meters and create an explosion 80 meters in diameter. It can kill someone. Even one large firecracker can rip apart a hand.”

Using the dailyÂ La ProvenceÂ as itsÂ source, anotherÂ articleÂ atÂ FranÃ§ois DesoucheÂ relates the violence in Marseilles on the night of July 14: A fire ravaged 5 hectares close to residences. 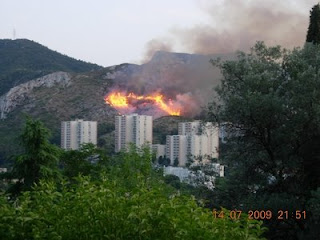 Two helicopters pouring water on the fire and a fierce battle waged by the marine firemen were needed to bring the fire under control. A day-care center was partially burned. A row of cypress trees bordering a nursery school went up in smoke. One individual was arrested as he threw rockets on the marine firemen who had come to put out a trash can fire. Fires were set in the four corners of one neighborhood, while trash cans and cars burned in others, notably with the help of Molotov cocktails. While the firemen went on one call after the other, the police fell into what appears to be an ambush. Bullets were fired at them and diverse projectiles were thrown in their direction. One policeman was slightly injured by a rock. The anti-crime brigade arrested one individual in possession of a 22-caliber rifle. In France, if you use your video-camera or your mobile phone to take pictures of the ongoing riots of Muslim “youths” against the police and the citizens of France, you can be arrested. Recently Britain has introduced similar laws. “Citizen reporters” are discouraged to document the appalling anarchy and the failure of the nation state to protect its citizenry. In this day and age, when electronic media even defeats totalitarian states like China or Iran in the endeavor to shut down information, the truth cannot be bottled up. Here’s a chilling account of the latest riots in France, thanks to Luc Bronner:

The Ministry of Interior has asked the prefecture not to communicate to the media the toll of the nights of 13 and 14 July, including the number of vehicles torched in the neighborhoods, prohibiting any verification of official figures. Systematically, the local authorities refer to the Interior Ministry who refused to give precise statistics, referring only to “relatively quiet night” despite the use as “worrying” by the unions of police, “mortar” – pyrotechnic rockets – against the police in many districts (Le Monde, 15 July).

Â Only the toll of the first night was communicated: “Some 500 vehicles were torched overnight from Monday 13 to Tuesday 14 July, which is the worst result ever recorded on the eve of National Day. Despite repeated requests to the Ministry of Interior and the Directorate-General of Police (DGPN), no figure was given on the second night, Tuesday 14 to Wednesday 15. But in 2008 the number of incidents was high July 13 (297 vehicles burned) until 14 (295).

Â The record’s silence was strictly enforced. Various prefectures contacted by Le Monde refused to answer, citing “ministerial.” The regional newspapers have experienced similar difficulties. Provence thus to a balance sheet – informal – much less favorable than in 2008, with 41 vehicles and a kindergarten on fire in Marseille, the night of 13 to 14 July.

Â “You are requested not to communicate on the incidents of July-14.” The order, for districts, from the Ministry of the Interior, determined to realize his own excesses of the Day, “says La Provence in its edition of July 15. But then, while local law enforcement were invited to silence Beauvau seems for the moment not really pressed to account for the rather “hot” in this 14-July: “The figures are not available for the moment “, it responded to our request.

Â Other local media describing the same problems and referredÂ to a “blackout” imposed by the Ministry of Internal Affairs, The Union, in Reims, denounced the attitude of the authorities: “Yesterday morning, every journalist of The Union-L’Ardennais came to the news of the night Â and the firefighters were entitled to the same speech: ‘No Fires’, “Gendarmes and police have confirmed,” wrote the daily. “In fact, the truth is quite different. Some of our interlocutors we have confessed in a low voice: ‘We cannot talk to you about the fires. We have received instructions.”

Â Le ProgrÃ¨s, Lyon, said the same blockages July 15: “In the prefecture of the Rhone, it is impossible to obtain information about urban violence Â about the night of July 13 to 14 in the department. Moreover, instructions to silence ‘radio’ was given to both firefighters and the police or the gendarmerie. ” In 2007 and 2008, the Ministry of Interior had been caught under-estimate the number of vehicles burnt during the nights of December 31. Europe 1 was routinely called prefectures to check the official.
Â While referring DGPN 397 cars burned on the morning of 1st January 2007, radio had recorded 683 from prefectural data. Same scenario on 1 January 2008: DGPN reported 372 fires in cars, against 746 for Europe 1.

Â Faced with these statistics, the ministry had to correct its balance sheet, recognizing finally 878 fires. The “instructions” given to prefectures now prohibit this type of audit.
Â Luc BronnerÂ

2 thoughts on “France tries to keep it quiet…”