Buh-Bye, Walter Cronkite: He Lost the Vietnam War for U.S. on TV, Had American Blood on His Hands

Debbie Schlussel once again shows more courage than the combined entourage of radio & TV-jocks in America: she tells the truth about a despicable creature that sabotaged America in everything he did, even more so than the “fake, but accurate” Dan Rather:

I just heard the news thatÂ former CBS anchorman Walter Cronkite died. And perhaps I will be one of the few with the guts to be real and say it: I’m not sad to see this overrated liar go. Buh-bye.

Cronkite enjoyed a long and glamorous life, unlike many of our late teen and 20-something American troops against whom he editorialized on a nightly basis. They died on the killing fields of Vietnam in no small part because he contributed to the video demoralization of America and the resulting lack of commitment to help our boys win the Vietnam War.

I’m sure that Cronkite will be remembered gushingly by all of the liberal mainstream media robots whom he spawned and who idolize him (and probably many gutless idiots on the right, too). In so many ways, he is their Michael Jackson, minus the creativity and talent. In life, they already exalted Cronkite far, far beyond what he deserved and completely ignored his awful transgressions against our country. 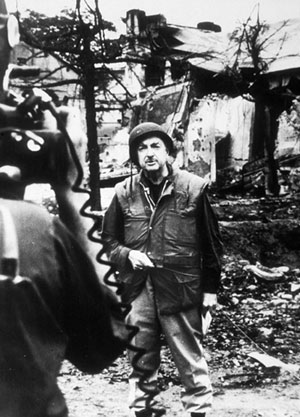 Walter Cronkite Defeated America on TVBut the man they called “The Most Trusted Man in America” was really something far different: The Most Destructive Man in America. And that is how he should be remembered. He had the blood of thousands of American men–some of them really just boys–on his hands.

Diana West tells you the way it really was.