After his Submission Speech in Egypt, it’s official: Obama is the Manchurian Candidate! 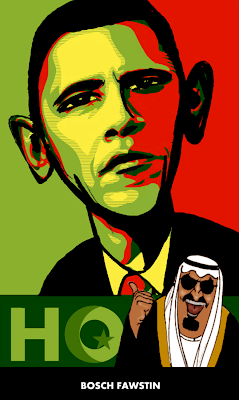 As opposed to the original ‘Hope’ poster, which was red, white and blue [As if!] this one’s red, green and yellow. Red for Communism, green for Islam [Mohammed’s favorite color], and yellow for cowardice. But in reality, though he may be half white and half black, he’s all gray.

Yet another Which-Side-Is-Obama-On Alert: “Release the Terrorist, Investigate the CIA,” by Andy McCarthy atÂ The Corner, August 27:

The Wall Street Jounral [sic] has a terrificÂ editorial this morning on how valuable the CIA interrogation program was in uncovering life-saving intelligence. My favorite paragraph was this one, which gets into the terrorist the mainstream press doesn’t want to talk about, Binyam Mohammed (see my column on him,here):

The most revealing portion of the IG report documents the program’s results. The CIA’s “detention and interrogation of terrorists has provided intelligence that has enabled the identification and apprehension of other terrorists and warned of terrorist plots planned for the United States and around the world.” That included the identification of Jose Padilla and Binyam Muhammed, who planned to detonate a dirty bomb, and the arrest of previously unknown members of an al Qaeda cell in Karachi, Pakistan, designated to pilot an aircraft attack in the U.S. The information also made the CIA aware of plots to attack the U.S. consulate in Karachi, hijack aircraft to fly into Heathrow, loosen track spikes to derail a U.S. train, blow up U.S. gas stations, fly an airplane into a California building, and cut the lines of suspension bridges in New York.

Though the Journal does not get into it,Â Binyam Mohammed was released outright by the Obama administration in February. He is now living freely in England. That’s our new counterterrorism approach: Release the terrorist who planned mass-murder attacks against U.S. cities but investigate the CIA agents who prevented mass-murder attacks against U.S. cities.…