Anti-Sharia demonstrations in Leeds and London

Pictured on the newspaper being held up – is Anjem Choudary of Islam4UK – who would have also held a protest today – March4Sharia – which was called off. That’s the same Choudary – when he was better known as ‘Andy’ laughing it up over 6 pints of beer and a girly mag. More>>

A man who allegedly indecently assaulted several female clothing shop assistants during a three hour spree is being hunted by police. WA Today has more

Blogger Offered Prison Release if He Will Convert to Islam…

Egypt: A Coptic Christian blogger in Egypt entering his second year of prison without charge is being pressured to convert to Islam in exchange for his freedom, his attorneys said. Compass

The Plight of Jews in Yemen(Cutting Edge News)
An American travels to Yemen to see what conditions are really like for a dwindling religious minority.

Things that fall out of burqas:

“It had been tied to the inner sleeve of her burka, but fell out as she reached down to scratch her leg … It was described by police as “a mini encyclopaedia of weapons-making.”

A woman who was caught with a computer memory stick containing documents about how to make explosives has pleaded guilty to terror charges.Â U.K.: Muslim woman admits to carrying USB drive with 7,000 files for the “Brothers of the Mujahadeen” at Liverpool airport/she is a mother of 6

It is fairly common to see the tribal regions of Pakistan described as “lawless,” as this story does. But while the central government may not have meaningful authority in the area, it is not lawlessness, per se, that is the issue. Instead, it is the imposition by force of Sharia law.

UK: “If we don’t do something in the next year or two we have in effect lost”

InterviewÂ available on YouTube. The MCB describes this as “a sick rant”…

Netherlands: How many Bouyeris live in the Netherlands?

On November 2nd the Netherlands will mark five years to the murder of Theo van Gogh.Â  The following is a translation of an interview with Ayaan Hirsi Ali, published in Dutch newspaper Het Parool on October 31, 2009, as part of a series of interviews marking the occasion: Â Â interview here

Geert Wilders is furious with three scientists who would characterize the PVV as an extreme-right party that undermines democracy. “I’m really furious. They have become totally bonkers. What idiocy. We are democrats to the backbone,” he said Saturday.Â Read further… 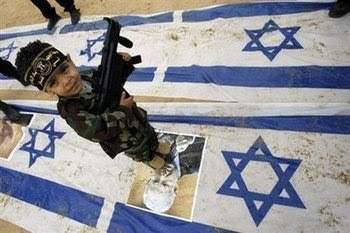 Yes, that’s a ‘Palestinian’ child with a fake machine gun (at least I hope it’s fake) stepping on Israeli flags and a picture of Prime Minister Netanyahu. It happened at an Islamic Jihad rally in Gaza on Friday. That rally and others like it are the obstacles to peace and are far more important than the obstacles to a ‘peace process’ about which the ‘Palestinians’ complained over the weekend. More (and more pictures too)Â here.