Obama’s Marxist Comrade Bill Ayers And 430 of His Fellow “Academics” Call For Boycott And Sanctions Against Israel….ZIP Even In Letter To CIA (Offering Support After 7 Killed By Bomber In Afghanistan), Obama Still Can’t Bring Himself To Say ‘Islamic Extremists‘ Terrorists’ Instead He Says “CIA Fallen Were ‘Protecting Our Country From Terrorism’“ZIP

It is coming. A showdown in America, not some wild west show, but a real showdown, just like Europe is facing, with Islam. Islam is not a religion but our government is treating it as such. Islam is a theocracy that governs citizens way of life, in the same way the Constitution is the light that governs America (when Congress is not in session). The forces of Islam in America are pushing the boundaries, in the hopes of establishing a Sharia based caliphate in America, and undoing western civilization. For those of you who still do not understand or believe that Islam is a threat, I am going to compare Sharia Law to the Constitution. You shall see that the “religion of peace” is really the religion of pieces, where the children blow up so quickly. Islamization Watch

On December 29, 2009, Abdul Al-Rahman Al-Rashed, Al-Arabiya TV director-general and former editor-in-chief of the London daily Al-Sharq Al-Awsat, published an op-ed titled “In Search of the Instructor in Yemen.”

The following is the article, in the original English.

Who Turned Abdulmutallab into a Terrorist? 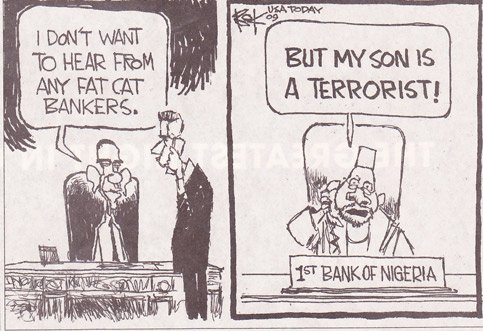 Cartoon of the week, from Debbie Schlussel

Bomb Not the Only Thing Burning in Abdulmutallab’s Pants… ZIP

He was lonely. He couldn’t get laid…. S&L

“Attention turned towards the Yemeni Sheikh Anwar Al-Awlaki, once again, who believes that he is the Sheikh of the new terrorists. It was this same Sheikh who instructed Major Nidal Hasan, an American of Arab origin, to commit the Fort Hood killings.”

“The First Priority Should Be To Confront Extremist Ideology, Its Theorists, and Its Scholars, Before Its Students and Its Soldiers”

“So as not to further complicate this already complex issue, we can sum up the incident as follows: attention turned from pursuing Al Qaeda’s army to pursuing its Sheikhs.

“After years of violent war, the image has become clear to everybody today; that ‘Al Qaeda’ is an ideological problem rather than an organizational one. Whilst there is a lot to do on the ground in order to eradicate this malignant disease, the first priority should be to confront extremist ideology, its theorists, and its scholars before its students and its soldiers. They are the secret to the organization and the reason for its continuation and its ability to recruit [people] and raise money, despite the great losses it has suffered all over the world.

“Abdulmuttalab, who was arrested in Detroit, and is only 23 years of age, spent three years studying mechanical engineering at a London university, and comes from a very moderate Muslim family; his father is a well-known banker in Nigeria and former chairman of First Bank, one of Nigeria’s biggest banks.

“Farouk, Abdulmuttalab’s father, was so concerned about his son that he alerted authorities, which is quite a rare thing to happen.

“The important question remains: Who convinced the young man [to carry out the operation] and prepared him for the operation? Abdulmuttalab is now in prison, whereas dozens of others or even hundreds like him are still at large.”

Al-Awlaki, “The Source of the Problem,” is “The Bin Laden of the Internet”

“Al Awlaki is now most wanted â€“ and the source of the problem with regards to at least two crimes: that of [Major] Nidal Hasan, charged with killing 13 people, and [Omar] Farouk Abdulmuttalab, charged with attempting to blow up a plane and with the attempted murder of the 279 passengers on board.

“Al-Awlaki is an important character and it seems he is the bin Laden of the Internet, the leader of an organization that brings together thousands of young men who are communicated with firstly via websites and then dealt with on the ground later. He became a leader and a Mufti who communicated with his students electronically, and he takes part in extensive Daawa [Islamic preaching] through the World Wide Web.

“Just like bin Laden, a cat with nine lives, he was targeted in two similar raids a few days ago and it is possible that he escaped despite news reports of his death.”

“The events of the last few weeks have revealed that the war on terror did not end with George W. Bush’s absence, and that terrorism did not stop after the release of dozens [of prisoners] from Guantanamo Bay. The retirement or capture of leaders such as Khalid Sheikh Mohammed did not and will not stop the recruitment and activity of this terrorist ideology.

“In fact, all of this has only confirmed the old truth that Al-Qaeda is an extremist ideology that must first be tackled ideologically, along with the prosecution of those who support it and the need to wage war against extremist websites in general â€“ which have become larger camps than the first camp that gave its name to the ‘Al-Qaeda’ organization.”