“It is right to ban the English Defence League’sÂ march“

Predictable. We are not dealing with democrats here. Funny though that the Islamic thugs and their leftist enablers Â accuse Â the EDL Â march as “violent attempts to intimidate religious and ethnic minorities” when they themselves are engaged in terror, mass-murder and systemic annihilation of minorities in countries where they have the upper hand.

Esmeralda Weatherwax Â has been to Tower Hamlets to check it out, she took some pictures and thanks to Vlad Tepes we have her report, via The New English Review

Why I am going to Tower Hamlets on Saturday.

I am of an old East End family. We define the East End as the three old boroughs of Bethnal Green, Stepney and Poplar which since 1965 make up the current London Borough of Tower Hamlets, plus that area of Shoreditch around Shoreditch Church which since 1965 is part of the London Borough of Hackney. Although my mother was born in Hoxton (which is adjacent to, but not part of, the East End) where my grandfather had a market stall, her parents were born in Bethnal Green as were all of my father’s family. My cousins and I have traced many lines of our families back to the 18thcentury. We span 4 centuries and 10 generations in the area, at least. Welcome to my ancestoral homeland.

The East End encompassed London docks which meant that people have always arrived from all over the world and many settled nearby. Just in the relatively small circle of my own family history, through blood,Â marriage, kinship or family friendship I know of Irish, Welsh, Italian, Scottish, Jewish, Polish and Russian, French Huguenot, Indian, West Indian and Yorkshire. Every group that came to the East End brought their own customs. The Huguenot influence can be seen in our love of bright colours of clothing and the flowers of our little gardens, even if the only garden available was a yard or a veranda. The Jewish influence is famous and goes far beyond the food and the delicatessens (and bread). Limehouse was Chinatown for many years although it is now in Gerrard Street W1. They integrated while giving us the best of their culture. Until recent years.

Sylheti speaking seamen from the nation now called Bangladesh came through the docks even before the Second World War. During the war a mosque opened along Whitechapel Road for their use and that of other Muslims. From the late 1960s onwards more came and brought their families. But they didn’t integrate.Â The East London MosqueÂ now covers the whole block between Plumbers Row and the Whitechapel Bell Foundry to the east, New Street to the west, Whitechapel Road to the north and Fieldgate Street to the south, other than the small and valiant Great Fieldgate Street Synagogue which the mosque covets but cannot have. 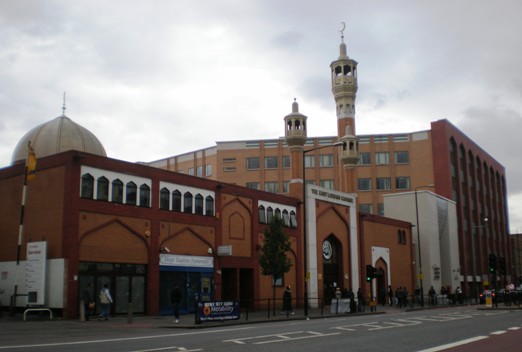 It isn’t the size of the Mosque complex (they are now building upwards, nine floors and counting) which is cause for concern, however, but the nature of their speakers and preachers, the malign influence of the Islamic Forum of Europe, the corruption of local politics and the imposition of Sharia law. The Telegraph JournalistÂ Andrew GilliganÂ chronicles this regularly.

The following are a few the reasons why the English Defence League will be rallying in Tower Hamlets next week. The Home Secretary Theresa May, at the request of the Metropolitan Police, acting under the orders of the notorious Lutfur Rahman, the Mayor (for elected mayor, read Islamic dictator) has banned any march for a month through 5 London boroughs, Tower Hamlets, Newham, Waltham Forest, Hackney and Islington. So the demonstration will be a static one, which is our democratic right from which we cannot be banned.

I photographed these in Ford Square and nearby Sidney Street.

The treatment of Women

The hijab is near universal. The niqab is imposed on women in greater numbers than in Bangladesh itself. 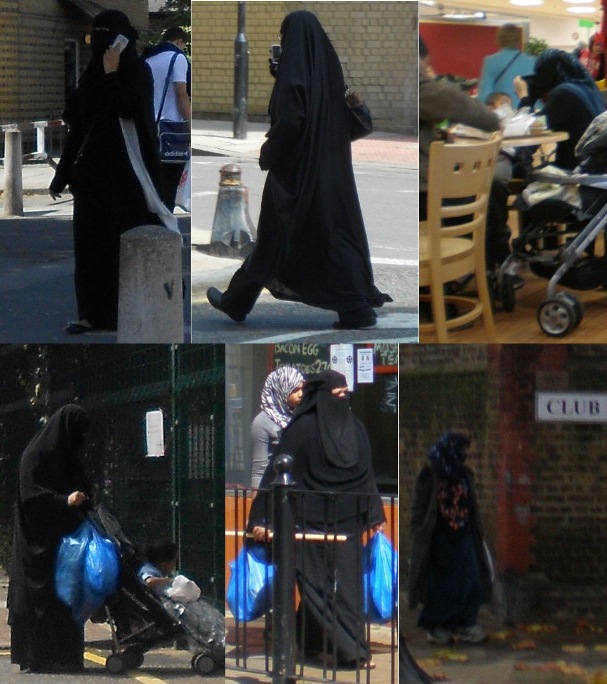 In AprilÂ a pharmacy assistant, not a Muslim and married to a Christian was threatened, as was the chemist shop where she worked under Hindu management, if she did not adopt a veil and Islamic dress code. “If she keeps working here and continues to dress like that, then we will boycott you because this is a Muslim area,” the chemist’s owner was told.

Advertising posters for swimming costumesÂ have had burkas painted on to them. The same young man responsible for some of the anti gay stickers we spotted in October last year, about which more later, has also been convicted of criminal damage to advertising hoardings. But he is not alone.

The niqab is imposed as compulsory school uniformÂ on girls as young as 11 at the Madani Islamic girls school in Mrydle Street behind the East London Mosque. I witnessed a young girl tearing off the face covering as she turned the corner of the road when I was there last year. At the time I thought she was waiting until she was out of sight of the mosque; I now suspect she was hurrying out of sight of her school. 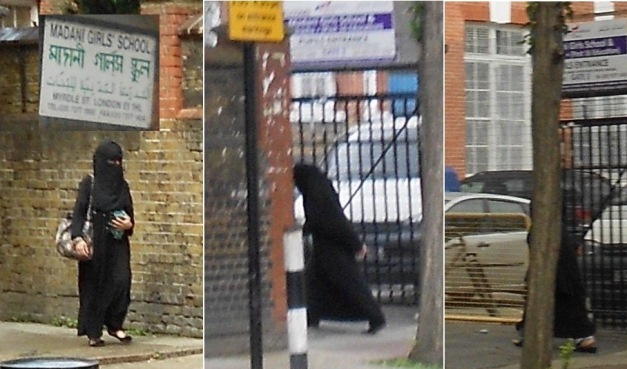 I photographed these women entering and leaving the pupil’s gate of theÂ school before the summer holiday began in July.Â Inset top left, the school address.

I can only conclude that this arrangement below which I photographed in Poplar in July is designed to allow the women of this ground floor flat to reach the veils and other garments just visible on the washing line at the far left above the curtains without having to don a previously laundered niqab before venturing into the sunshine.

These incidents do not stand alone. Others can be found by searching my blog articles going back to 2006.

The most obvious example is the declaration, some months prior to the Sharia Controlled Zone, that Tower Hamlets is a “Gay Free Zone” My daughter spotted this sticker left at the Aldgate end of Whitechapel in October, and right in Sidney Street in August. 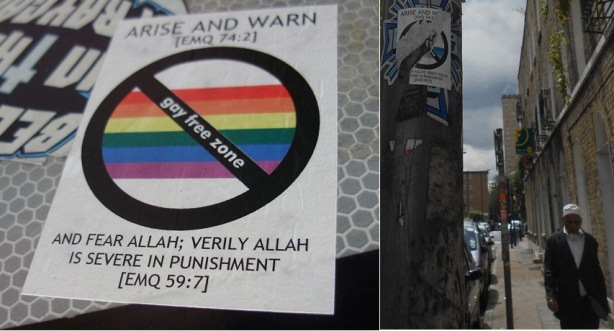