His comments come just days after official figures revealed that the population is expected to soar by the equivalent of a city the size of Leeds every year for the next decade.

A defiant Mr Blair insisted his party’s policy on immigration was the right one. He said: ‘It’s been a very positive thing and there is no way for a country like Britain to succeed in the future unless it is open to people of different colours, faiths and cultures.’

Under Labour, up to 5.5million people born outside the UK arrived as long-term migrants.

Between 1997 and 2010, around 2.3million left the country, meaning the UK population increased by around 3.2million as a direct result of foreign migrants.Â

In an interview with Eastern Eye newspaper, Mr Blair said: ‘The vision of a country of different cultures and different faiths mixing together is the right one.

‘That is not to say you don’t have problems at certain points, but those problems are to be overcome without losing the essence of what has actually allowed this country’s people to get on and do well.’ His comments were branded ‘shameless’ by critics and are set to fuel claims that the huge increase in migrants under Labour were due to a politically motivated attempt by ministers to change the country.

Two years ago, Andrew Neather, a former adviser to Tony Blair, said that Labour’ s relaxation of controls was a deliberate plan to ‘open the UK to mass migration’.

He added that Labour wanted to rub the ‘Right’s nose in diversity and render their arguments out of date’. Mr Blair added that the anti-immigration debate was one of the ‘past’. ‘I think the majority of people in Britain today are not prejudiced and can understand the benefits of migration.

‘I think what people worry about is where they feel there is no control over who comes in and there are no rules governing who comes in or not, and that is a different issue altogether.

‘It would be very unfortunate if by putting those rules into place, we view that immigration was a somehow bad thing for the country, because it is not.’

Tory MP Priti Patel, said: ‘As the daughter of immigrants, there is no question that those who work hard and make a positive contribution do enrich the fabric of our society.

‘But what Tony Blair has failed to recognise is that while he was in power, he opened the floodgates of mass and uncontrolled immigration which has left a damaging legacy in our towns and cities.’

Sir Andrew Green, chairman of Migrationwatch, said: ‘This is completely shameless from the Prime Minister who brought more than three million immigrants into Britain in the teeth of public opposition.’

Fellow Tory MP Dominic Raab added: ‘These comments are naÃ¯ve if not reckless. Tony Blair has left Britain with a legacy of uncontrolled immigration that has put huge pressure on public services and undermined community cohesion’.

The Unexamined Premises of Multiculturalism 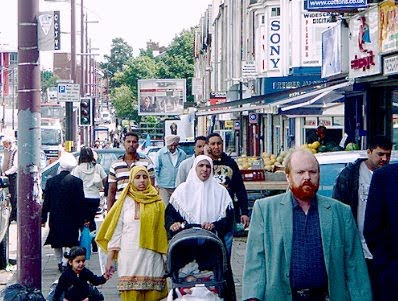 The continued dominance of the doctrines of Political Correctness and Multiculturalism depends on a set of unexamined premises. If the axioms underlying PC/MC were ever carefully examined by a large proportion of the populace, the entire political superstructure of the West would collapse.The practitioners of the Multicultural Arts are at least subliminally aware that the basic assumptions of their dogma cannot stand up to close scrutiny. This is why the proponents of PC/MC tend to respond to reasonable criticism with accusations of “racism”, vicious ad-hominem attacks, and physical violence. They fear that the edifice in which they have invested so much emotional and physical energy may in fact be spun from pure gossamer. Fear generates anger, and their fury demands the destruction of those who would expose their delusions.The other day former British prime minister Tony Blair invoked one of the major unexamined premises of Multiculturalism while defending his party’s immigration policy during his time in office: “Britain cannot succeed unless it opens its borders to more people from different backgrounds.”Where is the evidence for this assertion?

How has it been tested?

None of these questions is asked by any significant public figure, because the axioms of Multiculturalism must not be questioned. They wouldn’t axioms if they were open to debate. Immigration is good for the country, and that’s that. It’s true because Tony Blairs says so.

Let’s continue our questioning of these unexamined premises. In what sense is it “right” to mix cultures? By whose standards?

Really? In what way is Britain stronger now than it was before it admitted all those immigrants?

Little Tony continues to do well for himself:

Tony Blair, the billionaire donor Lakshmi Mittal… and a major deal in Kazakhstan

Tony Blair secured a deal to represent Kazakhstan after meeting billionaire Labour donor Lakshmi Mittal in the corruption-plagued country, The Mail on Sunday can reveal.

Steel magnate Mittal â€“who has given more than Â£4 million to Labour â€“ sat next to Mr Blair at a meeting of powerful international businessmen in the Kazakh capital Astana in May.

The former Labour Prime Minister’s meeting with Mr Mittal will inevitably raise fresh claims that he has cashed in on his decade in power at Downing Street. High powered: Lakshmi Mittal and Tony Blair in May 2011 in Astana

Mr Mittal is Britain’s richest man with a fortune of more than Â£20 billion and is the biggest employer in Kazakhstan. He employs 50,000 people there and is close to the country’s president, Nursultan Nazarbayev.

In 2001, Mr Blair’s links to Mr Mittal were questioned after it was revealed that he wrote a letter supporting the Indian-born billionaire’s deal to buy Romania’s state-owned steel firm just two weeks after he made a Â£125,000 donation to Labour.

Both parties denied Mr Blair’s support was connected with the donation. Mr Blair’s letter to the Romanian government hinted that the privatisation of the company and its sale to Mr Mittal might help smooth the way for the country’s entry into the European Union. Clean up? It was reported last week that Mr Blair had secured an Â£8 million deal to clean up the image of Kazakhstan -he denied this

The letter had a passage removed just before Mr Blair signed it, describing Mr Mittal as ‘a friend’. Mr Blair gave his support even though Mr Mittal’s LNM steel company was not British, was registered in the Dutch Antilles and had less than one per cent of its 100,000-plus workforce in the UK.

At the meeting of the high-powered Kazakhstan Foreign Investors’ Council five months ago, Mr Blair declared: ‘The history of Kazakhstan’s independence is rich in surprising achievements.

‘Your country is attractive both from the point of its geographical situation and economic potentials.

‘Ordinary people assess a country’s progress according to their living standards. This time, Kazakhstan’s achievements are wonderful.

However, Mr President, you outlined new heights in your [annual] message to the nation. This is the most correct way of the development.’

Last week a senior adviser to the Kazakh president said that Mr Blair had opened an office in the capital.Presidential adviser Yermukhamet Yertysbayev said: ‘A large working group is here and, to my knowledge, it has already opened Tony Blair’s permanent office in Astana.’

It was reported last week that Mr Blair had secured an Â£8 million deal to clean up the image of Kazakhstan.

The claims were denied by sources close to Mr Blair. Poor image: Kazakhstan was mocked as underdeveloped and sexist in the Sacha Baron Cohen film, Borat.

The foreign investors’ summit attracted a host of senior business figures and politicians with close links to Mr Blair and Labour.

Colonel Gaddafi that was endorsed by Mr Blair. Accusations: Despite the mockery of the film Borat, leaked U.S. cables suggest the country was undemocratic and used torture in detention

Romano Prodi. Mr Mittal’s employees in Kazakhstan have accused him of ‘slave labour’ conditions after a series of coal mining accidents between 2004 and 2007 which led to 91 deaths.

Kazakhstan is desperate to improve its image, which was mocked as underdeveloped and sexist in the Sacha Baron Cohen film, Borat.

In leaked US diplomatic cables, the country was accused of being undemocratic; using torture and other abuse; arbitrary arrest and detention; restriction on free speech; corruption in law enforcement and the judicial system; discrimination and violence against women and peopletrafficking.

Despite this Mr Blair and close colleagues have made a number of visits there.

As well as the trip in May, Mr Blair met President Nazarbayev on January 31, when they are understood to have discussed the establishment of new financial institutions. Above: Akorda Palace, Kazakhstan’s presidential residence in Astana, where Alistair Campbell is believed to have been been spotted in the country

He said he had been at an energy forum which is believed to have been organised by KazEnergy, the state-controlled oil and gas giant.

Mr Campbell said he was doing some consultancy work, though ‘nothing like the scale that Tony is doing’.

A spokesman for Mr Blair said last night: ‘Tony Blair has helped put together a team of international advisers and consultants to set up an advisory group for the Kazakhs, with a team of people working on the ground.

‘The work they are doing is excellent, sensible and supports the reforms they are making.

‘The Kazakhs also engage with a number of other former European leaders. Mr Blair last visited Kazakhstan in May of this year to attend a conference. He is not personally making a profit directly or indirectly through Tony Blair Associates or any company on this. He is not doing business in Kazakhstan.’