Nothing for defence, everything for tribute. Traitors and lunatics are in charge, but not responsible.

What do they think of this in Athens? 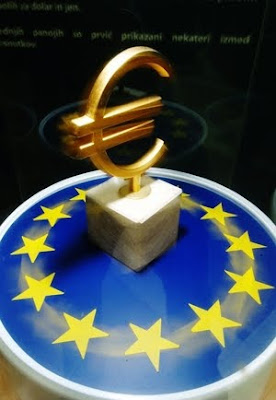 In Athens tonight, they can probably only stare in amazement. While their fellow members in the European Monetary Union have refused to bail them out without strict controls, the EU is givingÂ $6.5 billion to Muslim Brotherhood-led Egypt with no strings attached. Â Â (Israel Matzav)

“The European Union and associated financial institutions have offered an amount of more than 5 billion euros, or more than $6.5 bln, in grants, concessional loans and loans for a period of 2012 and 2013 to support Egypt’s democratic transition,” Rompuy told reporters.

But Greece, which is an EU member, is left hung out to dry? And they wonder why the Greeks don’t want to repay anything they borrowed until now?

Cyprus is also in deep doodoo and needs a bailout

President Demetris Christofias with European Commission President Jose Manuel Barroso, President of the European Council Herman Van Rompuy and European Parliament President Martin Schulz in Cyprus: all of them hardcore Marxists with Barroso being a Maoist.

Needless to mention that Cyprus (the Greek part of it) is run by a Marxist sock puppet,Â Â President Dimitris Christofias, pictured on the left.

The trouble is that Â the largest slice of any aid deal would go to Â the Russian mafia who have laundered money parked in Cyprus. SPD chairman Sigmar Gabriel, said it was inconceivable that German taxpayers would “save Cypriot banks whose business model is based on facilitating tax evasion”.

GERMAN ChancellorÂ Angela MerkelÂ said yesterday there could be no special bailout conditions forÂ CyprusÂ that did not include the need for economic reforms such as privatisations, which have been ruled out by President Demetris Christofias.

Â U.S. negotiating to sell F-16s and tanks to Egypt despite lawmakers’ objections

They will most likely be used against genuine pro-democracy protesters and/or Israel, but we are not supposed to think about that. “Higher strategic interests” are involved here.

Egypt’s negotiations with the US to acquire F-16 aircraft and M1A1 Abrams tanks are proceeding smoothly, a senior Egyptian military source has said.The source added that the negotiations are proceeding regardless of statements made by political opponents of US President Barack Obama, in what may have been an oblique reference to calls by US Congressman Vern Buchanan for the suspension of this deal over what he described as the “dictatorship of President Mohamed Morsy.”

He also said that news about fresh military assistance or deals always sparks controversies, which tend to subside when the deals are concluded. He alleged that those Congressmen or officials who oppose supplies of advanced weaponry to the Egyptian army belong to the pro-Israel camp.

He added that demands made by some Congressmen to stop weapon deals with Egypt are motivated by electoral interests, adding, however, that the US administration does not take into account the opinions of voters when it makes assistance deals because such deals are connected to higher strategic interests.

Egypt has been getting US$1.3 billion in annual assistance from the US since it signed the peace treaty with Israel in 1979. Since Islamist President Mohamed Morsy assumed power in July 2011, a number of members of US Congress have called for withholding aid to Egypt.

8 thoughts on “Bankrupt EUSSR about to hand over $6.5 billion to Muslim Brotherhood in Cairo”