Police fight back crowds as about 300,000 rally in French capital ahead of Senate vote on “marriage for everyone” bill.

Homosexual Marriage: What’s in It for Michael Bloomberg?

The authoritarian statist Michael Bloomberg has used his power to suppress guns, cigarettes, salt, trans fats, soda pop, baby formula, and even Styrofoam, but there is one thing he isn’t against: the distortion of marriage to encompass deviant same-sex relationships. His deep pockets allow him to extend his authority beyond NYC’s borders. Just as he recently dumped $12 million intoÂ television adsÂ propagandizing against the Second Amendment, he has donated generously to political candidates who will push his sexual agenda.

Paris:Â In typical fashion, the leftist filth turns reality on its head:

The accusations against Interior Minister Manuel Valls continue to flood the websites, with calls for his resignation from all corners. First, Valls has accused the Bloc Identitaire of being the cause of the confrontations on the Champs-ElysÃ©es. Here is theirÂ response:

The minister of the Interior has publicly accused the identitarian movement with what he is calling “excesses” during the March 24 demonstration. This accusation is based on nothing, for it does not correspond to a reality.

Not one identitarian member, not one of the 1.4 million demonstrators on Sunday, burned a car, broke a window, or pillaged a store. There were no “excesses”. After the demonstration, tens of thousands of people, individually, among friends, or with family, wanted to head for the largest avenue in Paris where there were already thousands of tourists.

All the incidents were the responsibility of the Interior Ministry alone. The Socialist government wanted incidents. It deliberately planted a large crowd on an avenue that was too narrow. This crowd conducted itself with exemplary correctness and, in that, it was perfectly French. Naturally, we are speaking of a traditional France that Monsieur Valls cannot understand since he disdains it.

To conclude, it is important to note the following: the March 24 movement belongs to no one. It belongs to all Frenchmen who were in the street that Sunday. Like hundreds of other associations, parties, and groups, the identitarian movement was present that day. It held its place as the others did, and in this fundamental combat there is room for everyone.Â 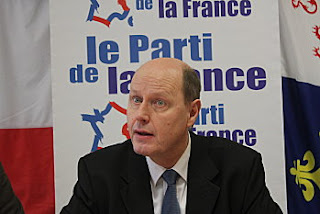 The Parti de la France founded and headed by Carl Lang (left) is a traditionalist Catholic party that separated itself from the Front National in 2009 primarily because of religious beliefs. Carl Lang issued thisÂ communiquÃ©Â on March 24 in which he calls for Manuel Valls to resign:

The Socialist power has once again shown its true colors, those of sectarianism and political violence. Refusing to allow French families access to the Champs-ElysÃ©es, when they wished to demonstrate against the Taubira bill, even though the avenue is open on all other occasions for any athletic victory, was already in itself an iniquitous decision, scandalous and totalitarian.

But not content with having barred the French people from the Champs-ElysÃ©es on the occasion of an immense popular demonstration that brought together more than a million people, the Interior minister redoubled his zeal with deliberate attacks by the police on totally peaceful families who found themselves near the Arc de Triomphe.

It is easier for Monsieur Valls to attack peaceful mothers with their baby carriages and their children than it is to ensure the safety of citizens in the three thousand lawless zones of France that are in the hands of ethnic gangs and drug dealers.

To the anti-family political violence of the Taubira law is now added a deliberate and totally unjustified Socialist police violence against families calmly demonstrating.

The Parti de la France rises up against Socialist political violence and against the police attacks ordered by the minister of the Interior and demands the resignation of Monsieur Valls from his governmental duties.

Note: AnÂ articleÂ posted atÂ Le ParisienÂ states that Manuel Valls (photo at top) in an address on Tuesday March 26 before the National Assembly accused “extremists” of “premeditated” excesses on Sunday, on grounds that they knew the Champs-ElysÃ©es had been closed to the demonstration. Therefore, according to him, those who crossed the line did so knowingly. He includes the Bloc Identitaire in the list of “extremists”. He also fulminated:

“There were no grenades, and to speak of children gassed is at the very least a dubious amalgamÂ (i.e., an improper association of events)Â that you do not have the right to mention in this amphitheater.”

Numerous eyewitness accounts online contradict Valls on this. I will try to have more tomorrow. I’ll point out in closing thatÂ Le ParisienÂ readers have mixed emotions, several saying that children should not be taken to a demonstration, and that everyone knows you should not get too close to the riot police. Others feel Valls is trying to blame others for his own failings.