Exasperated Australians are once again severely tested by the unhinged Senator Sarah Hanson-Young:

Who wouldn’t feel bad after a visit from Hanson-Young?

Sarah Hanson-Young makes me feel depressed and angry, too, so I fully understand:

AN internal report provided to the Immigration Department has warned that, when Greens Senator Sarah Hanson-Young turns up at a detention centre, there is a corresponding spike in “incidents” involving asylum seekers.

The Serco report, however, revealed that, during a visit by the Senator to Christmas Island between January 24 to 28 this year, the number of incidents more than doubled to 15 from an average of around six.

An accompanying graph showed the number of incidents peaked at 15 on the second day of her visit. It did not specify the types of incidents but claimed the visits caused “anxiety” and “elevated levels of adverse behaviour”.

I’m sure Hanson-Young does not wish or intend harm, but there is no question that reports of trouble in detention centres is useful to the cause of “refugee” advocates. I suspect detainees know this, and are also made by supporters to feel like victims rather than queue-jumpers.

Why do journalists treat Hanson-Young seriously?

GREENS senator Sarah Hanson-Young is to border policy what Eddie the Eagle was to ski jumping â€” failure doesn’t stop her.

It is extraordinary, however, that someone so rash, wrong and irresponsible on asylum-seeker issues is the go-to person for many in the media…Â The AustralianÂ describes the child-Senator well….

Perhaps it wouldn’t matter so much if this stupidity weren’t so lethal. The destruction of the Howard Government’s border laws by Labor, with the Greens cheering it on, resulted in 1200 boat people being lured to their deaths at sea.

Why didn’t the Left get this upset about the 1200 it lured to their deaths?

Below is the transcript for David Horowitz’s appearance on Monday, July 28th, onÂ The Hannity Radio ShowÂ to discuss his justÂ released new book,Â Â Take No Prisoners: The Battle Plan for Defeating the Left.

Sean Hannity:Â David, it’s good to have you back on the program.Â  How are you?

David Horowitz:Â Thanks, Sean.Â  Let me just say that you have the best media voice of anyone on this issue of the Middle East, and I thank you for it.

Obama is an anti-American.Â  He supports the terrorists, he’s supporting Hamas in this battle.Â  He supports the Muslim Brotherhood, which is the fountainhead of al-Qaeda and all the terrorist groups in the Middle East.Â  He is leading a retreat of America from the world.Â  He is taking us down as a nation.Â  He’s an anti-American radical with Communist views.Â  And we need to have more people saying this, telling it like it is.

END_OF_DOCUMENT_TOKEN_TO_BE_REPLACED

A PUTRID Jew-hatred has returned to the West, fed by mass immigration and stoked by the Left.

Do not mistake this anti-Semitism for mere anger at Israel over the war in Gaza. That war is just the calculated pretext for a month of menace that has terrified many Jews â€” as well as those of us who prize civilisation over barbaric tribalism.

Germany now has four million Muslims. Arab and Turkish protesters were this month filmed shouting “Gas the Jews” and other Jew-hating slogans and a Berlin imam, Sheik Abu Bilal Ismail, was filmed at his mosque preaching: “Oh Allah, destroy the Zionist Jews … Count them and kill them to the very last one. Don’t spare a single one of them.”

The Netherlands has almost one million Muslims and protesters in The Hague this month chanted “Death to the Jews” in Arabic, while some waved the black flags of the Islamic State terrorist group. The home of Holland’s chief rabbi was pelted with rocks.

Belgium has 700,000 Muslims and in LiÃ¨ge this month a Turkish shop showed a sign that read: “Dogs are allowed in this establishment, but Jews are not under any circumstances.” Two months ago four Jews were shot dead at the Jewish Museum in Brussels, allegedly by a French Muslim.

END_OF_DOCUMENT_TOKEN_TO_BE_REPLACED

The BBC Found Something Surprising About Photos of Gaza on Twitter

“Some of the images are of the current situation in Gaza, but a #BBCtrending analysis has found that some date as far back as 2009 and others are from conflicts in Syria and Iraq,” the BBC reported. The Israeli Embassy in Dublin has posted a factual but highly controversial series of posters on its Facebook page, warning Western European cities that they are fast becoming increasingly Islamic, while extolling Israel as ‘the last frontier of the free world.’ UK TelegraphÂ  The extraordinarily creative images, which the Irish media was quick to condemn as “grotesque,” includedÂ Michelangelo’s statue of David wearing an Arab headrag and with an explosive belt wrapped round his torso. Accompanying the slogan were the words “Israel now, Italy next”.

Another, addressed to Ireland, showed Dublin’s famous Molly Malone statue covered by a full-length black burqa, while a fourth featured what appears to be an armed militant perched on a seaside rock and bearing the words: “Israel now, Denmark next”. Â Similar posters were used for different cities, with the same warning going to Paris, accompanied by an image of the Mona Lisa wearing the Muslim garment.

Israel’s Channel 10 hasÂ reportedÂ that dozens of Palestinians emerged from the devastated Gaza neighborhood of Shajaiya to protest against the war, and that Hamas rounded twenty of them up and shot them in the street.Â The demonstrators reportedly blamed Hamas for the destruction of the neighborhood, and Hamas’s response was to kill them all immediately.

TEL AVIV – Hamas over the past few days has executed more than 30 Palestinians suspected of aiding Israel in the Gaza Strip, the Palestine Press News Agency reported Monday.

Hamas military top dog: Our fighters are eager for death–Â JIHAD WATCH
.
Good shooting. The IDF got them all:Â Good riddance.!
HamasÂ has issued obituaries for 4 of its members who all belonged to the same family, possibly even brothers.

Hamas invites Hezbollah to join in fighting against Israel–even with a thousand year history of murderous hatred between sunni and shitties, when it comes to killing infidels, Muselmaniacs are eager to join forces…..

German Muslims angered at insinuation that Muslims are easily angeredÂ

Hamas Wants Us to Care about Palestinian Children, Even if They Don’tÂ (BCF – thanks to Molschky) 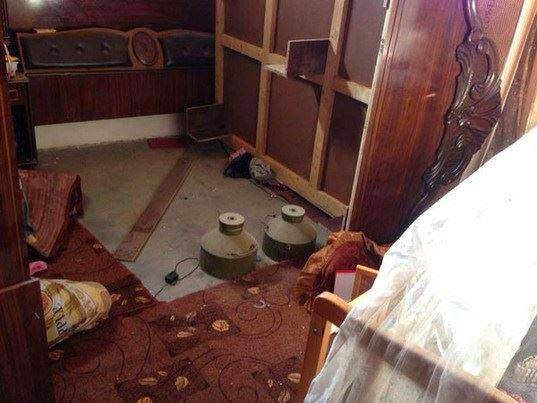 Israel Defense Forces shared this photo on Facebook, along with the caption:Â “Hamas continues to use its people for terrorist purposes: two days ago, we found explosive devices adjacent to a baby’s cradle. This is the true face of Hamas.”

Hamas sacrifices Arab children and celebrates the victory. Then we are supposed to cry overÂ the very same children…

Pali-Arabs alsoÂ dress their children as terrorists at kindergarten plays andÂ graduations and even display mock coffinsÂ draped in terror group flags in order to idolize “martyrs” and celebrate “martyrdom.”

END_OF_DOCUMENT_TOKEN_TO_BE_REPLACED

Jewish Youth of Vienna Sends a Message of Solidarity with Israel

It is said that a picture is worth a thousand words. The Jewish Youth of Vienna gathered in the Stephanplatz before the Cathedral, the city center. The result was this stunning graphic message of soldiarity with fellow Jews in Israel.

WatchÂ this You Tube video and make sure that you send it far and wide, especially to the media:

The idea that one of Hamas’s main command bunkers is located beneath Shifa Hospital in Gaza City is one of theÂ worst-kept secretsÂ of the Gaza war. So why aren’t reporters in Gaza ferreting it out? The precise location of a large underground bunker equipped with sophisticated communications equipment and housing some part of the leadership of a major terrorist organization beneath a major hospital would seem to qualify as a world-class scoopâ€”the kind that might merit a Pulitzer, or at least a Polk.

END_OF_DOCUMENT_TOKEN_TO_BE_REPLACED

It’s difficult to report the truth when jihadis are threatening to cut your head off. (GWP)

The major networks should run a disclaimerÂ to that effect when they carry reports from HamasÂ controlled territory.

Italian reporter Gabriele Barbati, who has now left Gaza and is no longer under direct threat of retaliation by Hamas, is telling the truth about what’s going on there. Hamas bombed the Palestinian camp in Shati – not Israel.–CONFIRMED: Hamas Rockets Bombed Palestinian Refugee Camp

Water is not wet, ice is not cold and Islam is misunderstood: (no shiite)

By placing the unconditional blame for all terrorist attacks on Islam and Muslims, we have conditioned our society to have a generally negative view and perception of the religion and its adherents. For more than two decades, we have gotten it radically wrong; terrorism isn’t a Muslim problem. …

Adam Soltani is executive director of the Oklahoma Council on American-Islamic Relations. Â More getting it radically wrong atÂ Oklahoma GazetteÂ thanks to Mullah, pbuh

Bennett to Al Jazeera: Your owner Qatar funds the daily murder of children in Israel and Gaza.

Hamas sympathizers in the media may not be willing to die, but they’re more than willing to lie.

Promoting ‘Proportionality’ in the Service of GenocideÂ Â (FrontPage)

“The thrust of the disproportionality argument is to deprive Israel of effective self-defense and is a display of moral perversion on the part of its purveyors.”

Hamas may have bitten off more than it can chew this time around.

“‘We know that Hamas uses human shields. But why would you report this when you are sitting in the middle of the Gaza Strip, surrounded by Hamas gunmen?’, says one reporter.”

The Hate-Wave All Over the Islamicized WestÂ Â (INN)

The Islamic hate-wave is the result of “25 years of extremely short-sighted and inept policy, or actually, absence of firm stand and articulated policy.”

Here are excerpts of anÂ interview on Australian TVÂ with Mustafa Barghouti showing how much “moderate, pacifist” Palestinian Arabs will lie to justify Hamas war crimes.

When will Jews realise that this putz is radioactive?

On Sunday, President Obama and First Lady Michelle released astatementÂ thanking Muslim Americans for their many “achievements and contributions… to building the very fabric of our nation and strengthening the core of our democracy.”

The comments were made to mark the celebration ofÂ Eid-al-Fitr, a time of spiritual renewal for Muslims which comes at the end of the month-long fast of Ramadan. The Obamas said in their statement that Eid “celebrates the common values that unite us in our humanity” and “welcomed their commitment to giving back to their communities.” The International Business TimesÂ reportsÂ that during Eid, Muslims join in Islamic prayer, while saying “Allahu Akbar,” or “God is Great,” and feasting.

The statement further reads that the administration “wishes Muslims in the United States and around the world a blessed and joyous celebration.” The letter ended with salutation of “Eid Mubarak,” which roughly means “blessed celebration.”

Obama’s claims don’t pass the smell test. These claims are not only ‘inaccurate’, they are offensive. Because he tells lies. To put it bluntly, only a complete dunce or a Muslim could make such an insulting claim; Muslims made no contributions the the U.S. whatsoever. In fact, Muslims (the Barbary Pirates) waged war on America’s shipping in the Mediterranean right from the get go; they brought up America’s ships and enslaved her crews. Thanks to these bloodsucking parasites America built a navy and fought the bastards. And now, 200 years later, we have the same problem, we are still paying tribute (the jiziyah) and they are still murdering us in large numbers.

Muselmanic“achievements and contributions… to building the very fabric of our nation and strengthening the core of our democracy..?” Spit. *&%$#@!

Obama suffers another one of those “my people” moments:

US president markedly unfriendly, interrupted prime minister as he attempted to push unfavorable truce on Israel.

Damning evidence has emerged of US President Barack Obama’s dismissal of Israel’s position in favor of supporting the position of Hamas and its allies during ceasefire talks.

Not good enough, she should be gone: