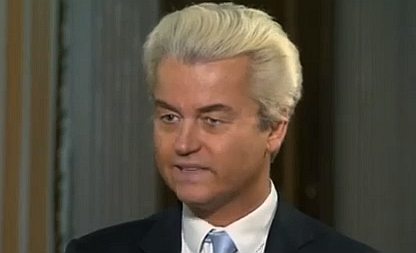 Yesterday was the tenth anniversary of the founding of the Party for Freedom (Partij voor de Vrijheid, PVV) by Geert Wilders in the Netherlands. Mr. Wilders was interviewed at length for the occasion by NOS, the Dutch public broadcaster.

Many thanks to H. Numan for the translation, and to Vlad Tepes for the subtitling:

When you’re arriving at a police station after being arrested on charges related to alleged terrorism, this might not be the most helpful gesture:

A teenage bride suspected of plotting with her husband to commit a terrorist attack in Sydney was released into the community earlier this month because the state’s strict new bail laws are not yet able to be implemented.

Isn’t it annoying how the enemedia portrays this potential suicide bomber as a “teenage bride?” The finger she shows us is a sign of Islamic supremacy, it is to signal “one god”, Islamic monotheism vs infidel polytheism.

The teenage Sydney girl arrested yesterday on terror charges had been released on bail earlier this month because new laws keeping terror suspects behind bars were not yet in force.

Alo-Bridget Namoa, 18, allegedly boasted about wanting to be the “Islamic Bonnie and Clyde” with her husband and stab a random member of the public.

But despite the strong objections from police, Magistrate Les Mabbutt had no option but to grant her bail two weeks ago, the Daily Telegraph report…See More

The teenage Sydney girl arrested yesterday on terror charges had been released on bail earlier this month because new laws keeping terror suspects behind bars…9NEWS.COM.AU
.

She wouldn’t get away in the Netherlands, from where we get this:

In Europe, you may now be arrested for wearing a fluffy pig hat:

(Via Sven Viking, who emails: “The best line is from a bystander: ‘Whether or not it was provocation, it is and remains a pig hat.’”

The leader of the Dutch branch of anti-Islam movement Pegida was arrested at a demonstration in Ede on Saturday for refusing to take off a child’s hat shaped like a pig he was wearing during the rally.

A few dozen people carrying Dutch flags and placards took part in the gathering in protest at plans to locate several refugee centres capable of accommodating up to 1,400 people in the town.

END_OF_DOCUMENT_TOKEN_TO_BE_REPLACED

The Key To Combating Radicalization

“…Egyptian men not only encouraged to pursue their sexual desires by raping non-Muslims as an act of war, they are exhorted to plunder the coffers of non-Muslims, too. In the early 1990s, Abu Ishaq Alheweny encouraged his followers to solve their financial difficulties by engaging in a jihad [holy war] against the West. Jihad, he argued, was a good antidote to the poverty experienced by Muslims in their countries at home.”

END_OF_DOCUMENT_TOKEN_TO_BE_REPLACED

Shaban Sherif Mady is a hardcore headbanger who somehow managed to settle in Canada, which he is hoping to turn into an Islamic hellhole. For this he’s got the blessings from the recently elected man-child Justin Trudeau.

” I’m an operative of the Muslim Brotherhood; I’m a terrorist.” – Shaban Sherif Mady

The following is an excerpt of Shaban Sherif Mady’s sermon (originally in Arabic):

“Justin Trudeau – I call him today the Najashi of the current era. He hosted Muslims, honoured them, visited their mosques, greeted them for their holidays, and removed the suspicion that terrorism is related to Islam, honoured the Muslims, hosted the refugees.

Canadian Imam likens Trudeau to a king who helped Muslims and then converted to Islam The following is an excerpt of Shaban Sherif Mady’s sermon (originally in Arabic): “Justin Trudeau – I call him…

If you still have any doubts that Shaban Sherif Mady is a hardcore Islamofascist, scroll down for more:

(The false prophet Mohammed said so)

As you can see, the guy is not just a raving lunatic, he also threatens and incites:

Canada-based Sheikh to Egyptian Christians: If you don’t turn the other cheek, the fire will burn you

I spare you the video, but you might be interested in the full text posted below the fold.

(This video and article originally appeared at CIJNews.com and is reprinted with permission.)

Trudeau knows exactly what he is doing and it’s all going according to plan. But keep an eye on his brother Sacha, that’s the guy.

END_OF_DOCUMENT_TOKEN_TO_BE_REPLACED

Muselmaniacs have been lying about this for ages. Insisting that it is “pre-islamic”, it is nevertheless totally islamic and they go to any length to force it on us. Like the burqa, child marriage polygamy and the murder of blasphemers, we are systematically desensitised and urged to tolerate the intolerable.

ARE YOU ARE WILLING TO COMPROMISE IN ORDER TO APPEASE THE MUSLIMS ?

Western states should legally permit immigrant communities to surgically “nick” young girls’ vaginas as an alternative to genital mutilation, a pair of US gynaecologists argued in a hotly-challenged paper Tuesday.

Such a “compromise” could allow groups to honour cultural or religious prescripts while saving millions of girls from invasive and disfiguring genital slashing practised in some African and Middle Eastern cultures, the two doctors stated in the Journal of Medical Ethics.

“We are not arguing that any procedure on the female genitalia is desirable,” said Kavita Arora of the Case Western Reserve University in Cleveland and Allan Jacobs of Stony Brook University in New York state.

That’s exactly what they are arguing. They are willing to be complicit in this abomination to please Muselmanic savages.

END_OF_DOCUMENT_TOKEN_TO_BE_REPLACED

Multiculturalism has proven divisive, not coalescent, so let’s ditch it

Like bad 1970s fashion, multiculturalism needs to be binned.

Sometimes the obvious questions don’t get asked. Maybe it’s the stubborn power of orthodoxy that puts a spanner in the spokes of our otherwise critical and curious senses. Whatever the reason, it’s time to ask this: why do we still have a minister, let alone an assistant minister for multicultural ­affairs?

Hasn’t this cultural fad overstayed it usefulness? Just as questions are asked about whether taxpayers should keep funding multicultural broadcaster SBS, given its raison d’etre has waned, isn’t it time we asked why we still need government ministers ministering the multicultural word to the people?

There is a sense of urgency around this question after last week’s inauspicious start by Craig Laundy, the new Assistant Minister for Multicultural Affairs.

Laundy sounded like the very model of the modern multiculturalist — modern in the sense of 1970s modern.

END_OF_DOCUMENT_TOKEN_TO_BE_REPLACED

This is a picture of  a human sacrifice. Cynically staged to rally the bleeding hearts. And they will use this image till the cows come home to tear down any sensible resistance to the Mohammedan invasion.  It was exploited by the present PM of Canada (and not only by him) to great effect.

The father of this boy is a people smuggler. He organised the boat and sent his child out into the night. All because he wanted a new set of teeth from the hated kafirs.

Ezra Levant of TheRebel.media reports that Abdullah Kurdi, whose son’s drowning death launched the international campaign to help Syrian refugees, is now on trial in absentia for his role in his family’s death. MORE on a story you won’t see on CBC:

And now, the case of Australia’s “Baby Asha”

Media reports suggested the mother may have deliberately injured her child to get to Australia.

Muselmaniacs will do anything, ANYTHING to settle behind enemy lines, that is their sacred purpose in life. They kill and die for it. And what are you prepared to do for what you believe?

A message from the Australian Liberty Alliance:

While the nation stops to follow the latest from baby Aisha and her activist-doctors, we wish to remind friends that the same doctors are releasing Australian children into the care of squalid condition and abusive parents every day. The protest of the GetUp! crowd about this sorry tale is a deafening silence.

Minister Dutton (LNP) has now made special arrangements to release Aisha and her mother into “community detention”. Whether the asylum seekers will be returned to offshore detention, as the Minister vows, is yet to be seen. Once in the ‘care’ of an activist group, this is not likely to be resolved in the interest of the wider Australian community.

The signal the Turnbull government has sent to the world this morning is clear: “Injure your child and fly to Australia. Some activists will take care of the rest.”

Stopping the boats was the right and necessary decision. However, it means little when the LNP opens our front door wide for ever more airplanes, while removing the padlock from the back door.

ALA position is to support real refugees closer to their homeland. A more sustainable approach to immigration and refugee intake is one of our core policies. Read more here: http://australianlibertyalliance.org.au/…/values-and-core-p…

Peter Dutton vows Baby Asha will be returned to Nauru

Asylum seeker baby Asha and her family will be returned to Nauru once medical and legal processes are complete, the Turnbull government has vowed.
SMH.COM.AU

QLD PREMIER Annastacia PalaszczukMs Palaszczuk said she and other state premiers had said they were willing to house the families currently in Australia.

I call that BS.

Despite the video recording being held by the police, both men still deny they raped the child….

In Afghanistan and elsewhere in the Islamic world, this kind of behavior is broadly tolerated. Women are so devalued, men look to other men and boys for sexual pleasure. Also, the Qur’an promises not just virgins to the blessed, but boys like “scattered pearls”:

“Those are the ones brought near in the Gardens of Pleasure, a company of the former peoples and a few of the later peoples, on thrones woven, reclining on them, facing each other. There will circulate among them young boys made eternal with vessels, pitchers and a cup from a flowing spring.” — Qur’an 56:11-18

“And they will be given to drink a cup whose mixture is of ginger, a fountain within Paradise named Salsabeel. There will circulate among them young boys made eternal. When you see them, you would think them scattered pearls. And when you look there, you will see pleasure and great dominion.” — Qur’an 76:17-20

“Young Boy Repeatedly Raped After He Was Billeted With Migrant Men,” by Oliver JJ Lane, Breitbart, February 20, 2016 (thanks to The Religion of Peace):

Two migrant men masquerading as teenagers are being prosecuted after raping a young child at a Swedish asylum centre, attacking him “ruthlessly” and even filming the assault.

END_OF_DOCUMENT_TOKEN_TO_BE_REPLACED

The future must not belong to those who preemptively submit to Mohammedan headchoppers for fear of being called “racist-bigot-Islamophobes”.

By Noel Baker/ Senior Reporter thanks to Mullah, pbuh

Islam is not a race. Opposing Islam is our birthright and the first step towards self-preservation.  Muslims and their leftist enablers must not be empowered to use our own law to shut us up.

A report has found that anti-Muslim racism is an “established reality” in Ireland, including on-street physical violence.

No evidence is given for this claim.

According to the report, drawn from focus groups of 66 Muslim men, women and children living in Dublin, some participants were verbally abused or assaulted in public by assailants shouting “Allahu akbar”, making references to Islamic State, or, in one case, asking the question: “Are you Bin Laden’s wife?”