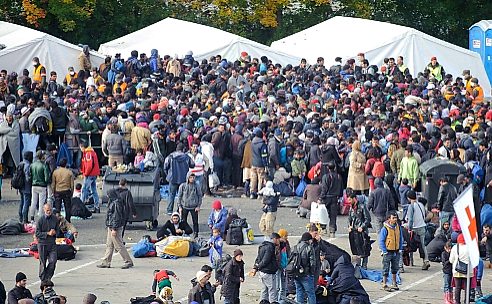 We recently posted a piece by the German opinion writer Anabel Schunke. Below is another essay by the same author from Roland Tichy’s blog. Many thanks to Nash Montana for the translation:

I don’t have to ANYTHING

If the state terminates the social contract by not keeping with its duties towards me, and isn’t even capable of protecting me anymore, then I can withdraw my obedience. And I am hereby doing just that.

“Syrians could bring in up to 500,000 family members” the FAZ headline read today. After newest calculations of the Ministry for Migration and Refugees, BAMF, Germany has to expect with hundred of thousands more refugees because of family reunification. Thus the BAMF analysis contradicts every prognosis that had been made in recent months, speaking of higher numbers than this. It’s questionable whether the BAMF calculated number is realistic. And I don’t have to believe anything just because it’s official.

Much more interesting than the number itself, however, Is the daily rhetoric laid bare. Germany MUST. And yes, even months after the asylum crisis I am still not tired of asking: Why exactly MUST Germany? Why does it seem that hundred thousands of people who illegally set foot into Germany have more rights than me and every other German? Why does it seem that in this crisis we only have duties, but never a say in it? Why has nobody yet asked me if I even want that “must” and if I even have to view that “must” as a must?

Strictly speaking, I did not want Angela Merkel, with her selfies and her open borders, to invite everyone into Germany. Why should I now want these people to bring in all of their families? And again: Why do we “have to”, and why do the others not have to anything?

For months I’ve heard nothing else but that we must, even though in Article 16a it says nothing requiring us to accept and grant asylum to people who have traveled through secure third countries. Apart from the fact that our asylum actually only pertains to politically and religiously persecuted people. At this juncture the Geneva refugee convention comes into play. If we don’t have to based on our Constitution, then we have to because of the Geneva refugee convention. But even considering that, it appears that only we have to accept an infinite and uncontrolled amount of refugees, while other countries have long ago set a maximum limit for themselves.

The truth is that there is no legal basis for my “must”. And nevertheless I must, and I have been disenfranchised by my own government. Just like all the others who also were not asked. And I have to pay for it all. With my taxes. Well, I probably will have to pay with entirely different things as well. For instance, with restrictions on our liberal Western values because of the influx of millions of Muslims. And with the transformation of our culture, which I actually found to be great just the way it was. And I pay with my rights and my safety as a woman, which is something that many women during the course of this year have so bitterly had to experience already. And in the end, even with the security and stability of an entire country, in which I felt great and perfectly comfortable until a few months ago.

80% of the people who immigrated in the Spring of 2016 do not possess the necessary identification documentation. But I, on the other hand, will be hunted down like a rabid dog should I fail to pay a traffic ticket on time. A minimum of 500,000 unregistered people are moving about completely undisturbed in Germany. I don’t know who they are, where they come from, and which one of them might be a terrorist planning an attack. The fact is, that there are is a significantly higher number of terrorists among these refugees than what we were told a few months ago. But the politicians that I once voted for do not care for my safety. The Leviathan has ceased to exist. (“Der Leviathan ist längst nicht mehr existent.”)

And this is exactly where the escape lies for this “must”. If the state terminates the social contract by not keeping faith with its duties towards me, and is not even capable of protecting me anymore, then I can withdraw my obedience. And I am hereby doing just that.

I don’t have to just watch how my country is morphing into something that I, from the bottom of my liberal conviction, deeply reject. I don’t have to unconditionally tolerate and respect a foreign culture that has no regard for my culture and that poses a danger to freedom and tolerance as a whole. I don’t have to make up for the deficit of millions of people who illegally came here and who, if it were up to me, wouldn’t be here in the first place. Especially not when nobody can explain to me under which legal basis this is all justified.

Instead one MUST finally begin to ask me what I want.

Just like a majority of Germans, I am all for helping those that are the weakest. That we protect women and children from war and persecution. I am for solidarity and I don’t have a problem with giving. But not unconditionally and infinitely. And especially not to those that do not abide by the rules that we have established for ourselves and that apply to everybody, if a state has to function. Asylum is one thing, immigration is another. Asylum can and should be granted according to given rules. But when it comes to immigration, we have to negotiate and we have to determine the rules by which we want it to work. As a nation, government, and society.

As long as this is not happening, I feel disenfranchised. And as long as I feel disenfranchised, there is no social contract and therefore, de facto, there is no foundation, which is why I have to do something. And still, if it were up to the political caste, I should just take it and pay for the damage. But that’s not how this works. I am 27. I have to live here for quite a while with the consequences of these politics, if I don’t emigrate.