Note how the Independent repeatedly tells us that the perp is “of German origin”- which means he is either a German convert or a  Mohammedan who is born in Germany.  That’s not even a fig leaf, that’s an insult to anyone concerned about the jihad.

Heidelberg attack: One dead after vehicle driven into pedestrians in Germany

Police later shot and injured the attacker, who is of German origin

One person has died and two more have been hurt after a car was driven into pedestrians in the German city of Heidelberg.

The driver escaped the scene on foot and was later shot after being tracked down by officers, who were tipped off by the public.

The 35-year-old man, who police have stressed was not a migrant, was allegedly carrying a knife. 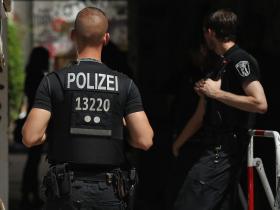 German school on lockdown after false alarm over ‘gunman’

Following the short stand-off, he was taken to hospital, where he is in serious condition and has undergone an operation.

A 73-year-old German man died of his injuries in the evening at a local hospital.

The injured people, a 32-year-old Austrian man and a 29-year-old woman from Bosnia, were only lightly hurt.

Footage of the arrest was posted to social media and showed a number of police officers with their sidearms drawn. One shot can be heard.

Later, photos posted to Twitter showed forensic officers at the car, which came to a stop outside a bakery.

There was no word on the man’s possible motives or his origin.

Which means far no one came forward who heard the “allahu akbar”.

Police said a terrorist background is not suspected and the man appears to have acted alone.

“Terrorist background” is never suspected in these cases. Never.

Later in the evening, the Polizei Mannheim Twitter account confirmed there was no search for a second suspect.

The car is believed to be a rental.