Lights out for France. The French have chosen not to be so “racist” and “Islamophobic” as to resist the jihad that is being waged against them with ever greater ferocity. Europe as a whole, too, appears to be poised to make the same choice, and vote itself out of existence. And then it will be America’s turn.

“Victory for the young, pro-EU centrist will be greeted with relief in key European capitals,” yes, and with grief among those who have dared to cherish the hope that the West would make a last stand for freedom. Instead, the French have voted overwhelmingly for the proposition that to defend one’s nation and culture is “bigoted.” And so decent French people will not defend these things, and all will be well, and all manner of thing will be well, until the final jihadist blade severs the last French non-bigot’s head from his neck.

La Grande Mosquée de Paris said: “It is a clear sign of hope to French Muslims that they can live in harmony and respect of French values.”

In reality, the Macron win is a sign that most non-Muslims in France are hopeful that they can live in harmony and respect of Muslim values. Good luck with that.

Paris’ main Mosque said on Sunday that the election of centrist Emmanuel Macron as France’s next president over far-right leader Marine Le Pen was a sign of reconciliation between French religions.

“It is a clear sign of hope to French Muslims that they can live in harmony and respect of French values”, La Grande Mosquée de Paris said in a statement.

The long road ahead, from Gallia Watch 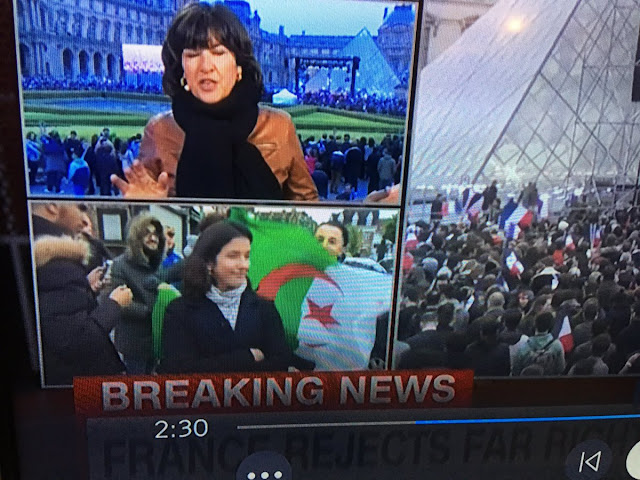 The final tally was Macron 65.5%, Marine Le Pen 34.5%. She doubled her father’s 2002 score. The abstention rate was 25%, higher than the first round. The legitimacy of the new president is already seriously compromised and could make a Macron sweep in the legislative elections difficult.

Note: A blank vote is a clean ballot inside an envelope with no choice indicated; an invalid vote is a damaged ballot. These votes are not counted into the final tally. Why would someone turn in a blank ballot? Possibly because neither candidate is acceptable but the person wants to vote; possibly out of contempt; possibly to be a nuisance.

Emmanuel Macron remains below the 50% mark.

According to Marine Le Pen, those who supported Emmanuel Macron have been discredited. Henceforth, the Front National constitutes the only opposition force to the new president and she intends to lead the battle for the legislative elections in June. It is a choice between patriots and globalists that will be submitted to the French people, voting district by voting district. She has announced the transformation of the Front National into a new political force. They are speaking of a “Patriotic and Republican Alliance.”

Nicolas Dupont-Aignan will continue his alliance with Marine Le Pen but will not be part of the new movement. He will present candidates in every voting district for the legislative elections.

Note: Baroin had hoped to be François Fillon’s prime minister. Baroin had been minister of Finance under Sarkozy. He voted for Macron, and has indicated he would like to be the opposition Prime minister in the event of victory of the right and center in the legislative elections. He is obviously very supple.

According to Laurent Wauquiez, president of the region Auvergne-Rhône-Alpes, and vice-president of Les Républicains:

“Emmanuel Macron is a president elected without enthusiasm. For the right, this is not the time to compromise.”

Note: I believe Wauquiez voted for Macron. He certainly did not vote for Marine. So he has not only compromised, he has collaborated.

According to estimates, 48% of François Fillon’s voters voted for Macron. 32% abstained or turned in blank or invalid ballots, and 20% voted for Le Pen.

Note: Fillon’s betrayal of Marine Le Pen and his support for Macron, and Marine’s poor performance in the debate, remain the two outstanding calamities of the election (besides the presence of Macron himself).

Photo above: Macron’s France. We see the Algerian flag, the crowds at the Louvre, and a journalist.

– I hope Marine understands that 2017 was for her the equivalent of 2002 for her father and that she will never obtain a large vote. Her nullity was displayed in the debate; her aggressiveness and her hysteria caused her to go from 40/41% to 35% in four days. She should leave the presidency of the FN.

– “You wanted to avoid war at the cost of dishonor. You will have dishonor and you will have war.”

– We await with great interest the invalidation of this election. That would be the case in a democracy.

Note: Both Macron and Hollande obtained less than 50% of the votes of registered voters.

– Anti-Macron demonstrations in all the big cities tonight; vandalism and violence go on, the taxpayers pay!

– I was struck by Macron’s victory speech. The poor fellow was pale, without composure, almost inaudible. He repeated clichés that expressed his love for France. Pathetic, and troubling. Marine is better when she is calm. Her strategy for the next five years is rather convincing.

– Congrats to all the cowards who chose Macron.

– Marine Le Pen should leave the FN and Asselineau should replace her. Just in debating alone, he would have flattened Macron! He would not have mixed things up as Marine did with the euro. Marine does not have the intelligence of a president.

– At the end of the debate between Hollande junior and Marine Le Pen, I found that Marine had dominated the debate… After two days of media commentary I almost began to have doubts.

The Macron leaks contain secret proposals that would lead to the islamisation of France and Europe. These are shown in a Powerpoint presentation which appears to have come from the Institut Montaigne. Harmonising education between countries on different sides of the Mediterranean is one of the key objectives.

.
Create a common history textbook with Italy, Spain, Morocco, Algeria and Tunisia (3) in order to put in historical perspective the mutual contributions and religious convergences between the two shores of the Mediterranean. Within the 3+3 framework, we recommend the creation of a commission of historians responsible for drawing up a common history textbook. The aim of this work will be: -to create a common base of objective historical knowledge founded on the logic of a historical “draw” [stalemate] – to develop a sense of belonging to a common history – to reduce the fantasies of victimisation on one side as well as civilisational superiority on the other
.
The document also recommends the introduction of Arabic teaching to French schools, including bi-lingual classes. This is justified by with the claim that Muslims are currently getting their “Arabic fix” from mosques, where they risk being radicalised. I previously noted that “soft islamisation” is being advocated as the remedy for “hard islamisation” and that this represents a kind of de facto reward being offered to jihad violence. Jihad gets results. It leads to societies being islamised, one way or the other.

Other plans for measures to islamise France include facilitating mosque construction by making it easier to arrange finance for it and providing reserved Muslim areas in municipal cemeteries. Again this is justified by claiming that it will lead to the emergence of a “French Islam”.

There is also a proposal, unfortunately not specified in detail, to finance Islam by taxing halal consumption.

The email that references this presentation can be seen here:

It says: “The PowerPoint study on the Islam of France (provisional and very confidential): prepared by the IM [Institut Montaigne] and Hakim El Karoui, who was introduced to you at a previous lunch.”

For those expressing scepticism about this, here is more information. The exact email is called “Fwd: Notes à date (1) : REGALIEN”, sent by quentin.lafay@gmail.com to sarah.gallitre@gmail.com and amiel.dvd@gmail.com on 31 August 2016. It can be found in the quentin.lafay archive within the set of Macron Leaks files. Here is a magnet link if you want to download it and have a torrent client installed (link).

As this Figaro article (link) shows, some references to these proposals have already been made in the mainstream press so it is not even that far-out in terms of the thinking of the left-wing intelligentsia in France. What wasn’t known was that Macron’s people were on board with it.