Ramadan slaughter continues. Islamic State are Sunni & loathe Shia Iran as much as they loathe infidels in the West.

Twin attacks on the Iranian parliament and Ayatollah Khomeini’s mausoleum in the capital, Tehran, have killed at least 12 people and injured many more.
. Several killed in attacks on parliament and Mausoleum of Ayatollah Khomeini in Tehran, as ISIL claims responsibility.

Isis has claimed responsibility for twin attacks at the Iranian parliament and the tomb of Ayatollah Khomeini in Tehran, in what would be the first time it has carried out a major terror operation on Iranian soil.

Analyst Charlie Winter said the claim, which appeared on Isis’s official news wire Amaq, had “massive implications” for the region.

“Iran’s response to this could utterly transform the shape of the war against [Isis], which is, of course, exactly what [Isis] wants,” he tweeted.

There were conflicting reports of the number of dead, with local news putting the figure between one to eight people, and up to 30 injured. Another four have been taken hostage in the ongoing gun and suicide bomb assault on Tehran’s parliament, Tasnim news agency said.

Parliament was in session when four gunmen wielding Kalashnikov rifles stormed the building early on Wednesday, and politicians and other staff remain trapped inside. Sporadic gunfire could be heard as security services swarmed around parliament’s entrances.

At least one security guard died in two suicide bombings at the tomb of Ayatollah Ruhollah Khomeini, the leader of the 1979 Islamic revolution, which was attacked by four more gunmen. 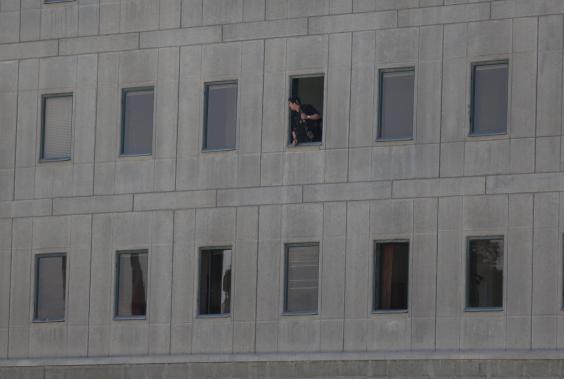 A police officer looks out of the parliament building in central Tehran, Iran, during a terror attack on June 7 2017 (REUTERS)

Isis is at war with Iran-backed forces in Syria and Iraq, and views Shia Islam as heretical. In recent months there has been a marked step up in propaganda targeting majority-Shia Iran on the militant Sunni group’s news networks, as well as messaging in Persian aimed at recruiting Iranian Sunnis.

Isis had also called for for increased attacks on unbelievers during Ramadan, during which it says the rewards for jihad in heaven are multiplied.

Wednesday’s events in Tehran mark the fourth major attack worldwide claimed by the group since the holy month began on 27 May.

One thought on “Teheran today!”