Muslims, homosexuals, Aborigines & the incessant global warming propaganda from the ABC must not be criticized or ridiculed. These are the holy cows of Turncoat’s Australia. Good on Pauline Hanson that she rocks the boat: The leader of Australia’s rightwing One Nation party has been rebuked by the Turnbull government for entering the Senate chamber wearing a black burqa.

Pauline Hanson caused a commotion by arriving at the Senate chamber for the daily question time session dressed in a black burqa, which was designed to underscore a call she intended to make to ban the religious garment, citing national security concerns.

But Hanson was rebuked sharply for her behaviour.

PAULINE Hanson has admitted the stunt she pulled, where she entered the Senate covered head to toe in a burqa, was “extreme”. But she’s unrepentant saying any anger it may have sparked was fine as it started a debate about face coverings.

Hanson has also suggested “these people” who wear burqas “should go to a country that suits their needs”.

Plus attorney general George Brandis condemns Hanson’s burqa ‘stunt’ and cautions her not to offend religious sensibilities of other Australians
.
Can’t offend Muslims. We all know that they riot and kill for their ideology. Submission is the order of the day.

The leader of the government in the Senate, the attorney general George Brandis, told the One Nation leader the ruling Coalition had no intention of banning the burqa.

There shall be no resistance to the islamic expansion project. Turncoat’s foot soldiers got the message.

In remarks that secured him a standing ovation from the opposition Labor party, and the Greens party, as well as other crossbench senators, Brandis warned Hanson against indulging in behaviour that Muslim Australians would find offensive.

“Senator Hanson, no, we will not be banning the burqa,” Brandis told the Senate on Thursday. “Senator Hanson, I’m not going to pretend to ignore the stunt that you have tried to pull today by arriving in the chamber dressed in a burqa when we all know you are not an adherent of the Islamic faith.

“I would caution you and counsel you, Senator Hanson, with respect, to be very very careful of the offence you may do to the religious sensibilities of other Australians.”

“We have about half a million Australians in this country of the Islamic faith, and the vast majority of them are law abiding, good Australians, and Senator Hanson, it is absolutely consistent with being a good law abiding Australian and a strict, adherent, Muslim.”

Brandis is full of shiite. Muslims adhere to the sharia, not to Australian law. How many massacres will it take before politclowns like Brandis get the message?

Brandis reminded Hanson that as attorney general, he held preeminent portfolio responsibility for national security, and the advice from intelligence agencies was clear – countering the risks of extremism required close cooperation with the Islamic community.

The attorney general, who was clearly infuriated by Hanson’s behaviour, rebuked her sharply for causing offence to a faith community. “To ridicule that community, to drive it into a corner, to mock its religious garments, is an appalling thing to do, and I would ask you to reflect on your behaviour.” 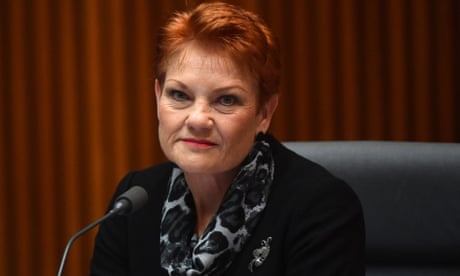 Hanson smiled throughout Brandis’ answer, and visibly delighted with the commotion caused by her intervention, left the Senate chamber shortly after her designated question.

The Brandis rebuke prompted Labor, Greens and some crossbenchers to stand and applaud. Some but not all government MPs also applauded but kept their seats.

The leader of the opposition in the Senate, the Labor senator Penny Wong, said if the standing orders permitted, she would have issued a vote of thanks to Brandis for his remarks.

Wong, also clearly infuriated, told Hanson: “It is one thing to wear religious dress as a sincere act of faith and another to wear it here as a stunt in the Senate chamber.”

The burqa is a garment of oppression. To describe it as religious dress is dhimmitude on steroids.

Hanson’s call for the banning of the burqa prompted disorderly interjections from across the chamber.

The One Nation leader’s question was posed to Brandis along the following lines: “In light of our national security of this nation, will [the government] work with me to actually ban the burqa in Australia considering there have been 13 foiled national threats against us with terrorism, three that have been successful that Australians have lost their lives?

Looking back, and angry: what drives Pauline Hanson’s voters

“Terrorism is a true threat to our country. Many Australians are in fear of it. What I would like to ask on behalf of the Australian people, considering there has been a large majority of Australians wish to see the banning of the burqa.”

Worse than terrorism is the jihad by demographics. And worse than everything is the cringing cowardice and the abandonment of our values by those who are sworn to protect us.

The Labor senator Sam Dastyari, who is of Iranian heritage, and a non-practising Muslim, shouted that Hanson was a threat to national security, and a “disgrace”.

The utterly corrupt Iranian slime bomb Dastyari is an insult to every Australian. He should not hold a position of authority under any circumstances.

Another Labor MP interjected that Hanson would next enter the chamber wearing a white hood – a reference to white supremacist groups.

Hanson later took to Facebook to double down on her behaviour in the parliament.

Hanson’s One Nation party proposes anti-Islamic policies including a ban on Muslim immigration, and a royal commission into Islam. Hanson has also called for a Trump-style travel ban on Muslims entering Australia.

The incident on Thursday is the latest round in Hanson’s battle against the burqa.

Hanson said she wasn’t challenged as to her identity. Although she has conceded security may have suspected the One Nation leader was beneath the face covering.

Gasps of “what on earth?” could be heard from the Senate as she sat down. Attorney-General George Brandis looked bemused by the spectacle and later berated Hanson for “mocking” law abiding Australian Muslims.

On Sydney radio station 2GB she said the burqa was “un-Australian”.

Talking to presenter Ben Fordham, she said, “Is it extreme? yes. Is it getting my point across? I hope so.”

Hanson said she entered the Senate without being checked.

“No security guards at any point in time asked to see my face,” she said.

“One of the attendants on the floor of parliament, he just gasped.

“He did not ask to see my face. Apparently they were told I was going to do it, they did not check if it was me.”

She said that in five years or more time, Australian women might be forced to wear the burqa. “This is a western country. If these people want to dress up, go to a country that suits your needs.”

Senator Hanson also claimed Greens Senator Peter Whish Wilson shook her hand in the corridor while she was wearing the burqa. He’d never greeted her or shaken her hand previously.

Senator Whish Wilson told BuzzFeed he did shake Hanson’s hand but said he had no idea who was under the material and was now “totally weirded out by it”.

He said the amount of security around Hanson led him to believe a Muslim woman, who was entitled to be in parliament, was being harrased so he wanted to support her.

An expert on Islam has said Hansons’s remarks could incite hatred towards women.

Hardly. What an idiotic remark.

Director of the Institute for Religion, Politics and Society at Australian Catholic University, Dr Joshua Roose, said, “knowing that Muslim women are likely to be targeted in verbal and physical attacks due to their more recognisable appearance, Senator Hanson’s stunt is likely to directly and indirectly increase the risk of violence towards Muslim communities.”

Funny that. So far Muslims have committed many crimes of violence against Australians, but Aussies have never retaliated.  Dr Joshua Rose suffers either from dhimmitude or cognitive dissonance.