Threatened by ISIS, Khalifa says in a recent radio interview with The Sports Junkies that she won’t give the extremists what they want: ‘[Y]ou can’t show weakness. That’s exactly what they’re looking for. I really try and just make it look like it rolls off, but I’ll admit, it gets to you after a while.’

END_OF_DOCUMENT_TOKEN_TO_BE_REPLACED

A law student at Edinburgh University claims he is under investigation for “Islamophobia” because he mocked the Islamic State.
.

Robbie Travers, who is also a commentator with the Gatestone Institute, posted on Facebook that another individual at the college reported him to campus authorities for making fun of the terror group.

“Afraid I’ve been a little more quiet as I have been accused of Islamophobia because I mocked ISIS, and I’m being investigated on such a ground by my University. Mocking ISIS allegedly made Islamic and minority students feel “threatened” and “unsafe,” so goes the complainant’s ramblings. Have engaged legal advice to dismiss this nonsense. Wish me luck,” wrote Travers.

In a subsequent post, Travers also revealed that he was being investigated for criticizing the Islamic hijab as an affront to women’s rights as well as another Facebook message in which he praised Prime Minister Theresa May for not wearing a hijab.

END_OF_DOCUMENT_TOKEN_TO_BE_REPLACED 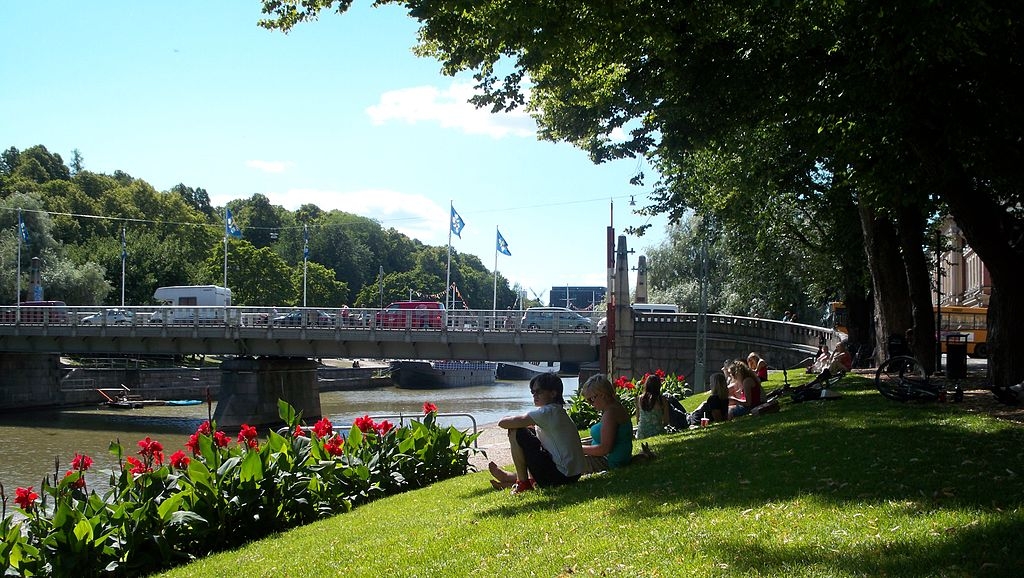 Jihad — in Finland? Terrorists do not need an excuse to butcher “infidels”. On August 18, an Islamic terrorist murdered two women in in Turku, Finland, during a stabbing spree in the city’s market square. Pictured: The Aura River in Turku. (Image source: Arthur Kho Caayon/Wikimedia Commons)

In 24 hours, Spain suffered two major terror attacks. A jihadist cell killed 15 people in Barcelona and the seaside resort of Cambrils. In the past year, Germany was the other European country hit hard by armed Islamists. First, a jihadist plowed a large truck through a Christmas market in central Berlin and murdered 12 people. Then a man wielding a knife murdered one person during an attack at a supermarket in Hamburg.

One day after the carnage in Barcelona, another terror attack took place in Turku, Finland. Two women were murdered in the market square of the country’s oldest city. Jihad — in Finland?

The Islamist attacks against Spain, Germany and Finland unmasked the central problem: Pacifism will not protect Europe from either Islamization or terror attacks. Spain and Germany were, in fact, among the most reluctant countries in Europe to take an active role in the anti-ISIS coalition.

This is what Children are taught in Islamic schools in Bengal,India where Muslims have crossed 25% population Abdelbaki Es Satty, the Moroccan imam who headed the terrorist cell that perpetrated the attacks in Catalonia on August 17 and August 18, had been radicalized at least a decade ago. But his training enabled him to lead an outwardly normal life that drew no attention from residents of Ripoll, the small town in the foothills of the Spanish Pyrenees where he lived.

On Saturday evening, hundreds of thousands of people, including King Felipe of Spain, Spanish Prime Minister Mariano Rajoy and regional Catalan premier Carles Puigdemont, marched in Barcelona in a show of unity against the terrorist attack that has claimed 16 lives to date in Barcelona and in the seaside town of Cambrils.

A 51-year-old German woman who was seriously injured in the attack on Barcelona’s La Rambla promenade became the 16th victim of the attacks when she died in hospital on Sunday.

END_OF_DOCUMENT_TOKEN_TO_BE_REPLACED

Guess who gets the red-carpet treatment — and who gets turned away?

Three years ago, Aideen Strandsson, an Iranian actress who had converted from Islam to Christianity appliedfor asylum in Sweden on the grounds that apostasy is a capital offense in her home country. (Don’t ask me why her name sounds Swedish rather than Iranian.) This summer, Swedish authorities turned her down. They were fully prepared to send her back to Iran – and to her death – when the Hungarian government stepped in and agreed to take her. It is just one individual’s story, but it illuminates the dramatic difference between Western and Eastern Europe when it comes to matters that will, before too long, decide the future of the continent.

Sweden, of course, is one of those Western European countries that have eagerly granted asylum to armies of Muslims who pose as refugees from persecution but who are, in fact, economic migrants, eager to climb onto the welfare-state gravy train. Hungary, meanwhile, is one of those Eastern European countries that refuse to take in Muslims but are willing to accept Christians.

Here I have to disagree with Bruce Bawer. Muslims are, of course. opportunists and economic migrants, but their first and foremost motivation is Islam, not necessarily the welfare-state gravy train.  That’s just an added bonus to invading infidel lands, raping their women and doing da’awa.

END_OF_DOCUMENT_TOKEN_TO_BE_REPLACED

Two sides of the COIN failure in Afghanistan, US Janissaries for Islam, Generals Petraeus and Nicholson (thanks to Andrew Bostom)

They say a picture tells a 1000 words, but these pictures tell the whole story: American dhimmi generals wearing Afghan costumes to endear themselves to their Mohammedan overlords. These people are not generals, they are  degenerates.

HOW BRITAIN IS COMMITTING SUICIDE (AGAIN)

The Times (£) reports today that a white Christian child was taken from her family and forced to live with a niqab-wearing foster carer in a home where she was allegedly encouraged to learn Arabic.

We are living in culturally totalitarian times. Truth, tolerance and decency are being replaced by lies, oppression and cruelty. Such incidents are now occurring thick and fast; and there’s a lot more of this to come. The Times (£) reports today that a white Christian child was taken from her family and forced to live with a niqab-wearing foster carer in a home where she was allegedly encouraged to learn Arabic.

The story says that child was placed in not one but two Muslim foster homes, against the wishes of her family, by the London borough of Tower Hamlets.

END_OF_DOCUMENT_TOKEN_TO_BE_REPLACED

The explosives-laden car went off at the wholesale Jamila market in Baghdad’s Shiite district of Sadr City, a police officer said. The explosion also wounded 28 other people, he added, saying the death toll was expected to rise further.

A medical official confirmed the casualty figures. Both officials spoke on condition of anonymity because they were not authorized to talk to journalists.

Imam Tawhidi will never be taken seriously by other  Muslims because he is  from the hated Shia  minority.

The good sheikh is denied legitimacy of his clerical credentials; he has not been recognised as an imam by the Australian National Imams Council. Islamic television station ‘One Path Network’ circulated a video asserting that Tawhidi cannot legitimately speak for the Islamic community. Even ABC programs have supported this, with Paul Barry’s ‘Media Watch’ contending that the media ‘should not be giving (Tawhidi) a megaphone’ because of his ‘divisive’ and ‘offensive’ views.

One mistake in this video: there were 15 Member states involved in the Barcelona Declaration, not 28, this was a mistake, all other info stands and can be verified here: Itamar Marcus
Women who hijacked planes and murdered Israeli civilians carried out “wonderful acts of heroism,” according to a Palestinian psychologist interviewed on the official PA TV program Our Ethics. Citing the female “heroes” she felt were examples for other Palestinian women, psychologist Jultan Hijazi mentioned Laila Khaled, who participated in 2 plane hijackings, Dalal Mughrabi who led a bus hijacking and the murder of 37, Fatima Barnawi who placed a bomb in a cinema, and the “mother of Martyr Muhammad Farahat,” who led her son to his terror attack in which he murdered five young students (for more information about these terrorists, see below).

After citing these and other examples of Palestinian women involved in terror and murder, the Palestinian psychologist indicated their importance for youth because “women carry out a large role in the children’s psychological preparation.” It seems that according to Hijazi, having murderers as role models is important for Palestinian children.

The following is an excerpt from the PA TV interview with Palestinian psychologist Jultan Hijazi:

END_OF_DOCUMENT_TOKEN_TO_BE_REPLACED

The international media tries to make the crisis in Myanmar out to be another instance in which Muslims are being victimized, when in reality, as with Israel and the “Palestinians” and so many other instances, if the Muslims laid down their arms in Myanmar, there would be peace, whereas if the Buddhists laid down their arms, they would be massacred.

YANGON/COX’S BAZAR: Myanmar’s government said it has evacuated at least 4,000 non-Muslim villagers amid ongoing clashes in northwestern Rakhine state, as thousands more Rohingya Muslims sought to flee across the border to Bangladesh on Sunday.

The death toll from the violence that erupted on Friday with coordinated attacks by Rohingya insurgents has climbed to 98, including some 80 insurgents and 12 members of the security forces, the government said.

Bangladesh sends back 70 Rohingya despite violence

Police said some of those detained had entered Bangladesh via the Ghumdhum border area — where the Myanmar forces unleashed the barrage of fire just hours earlier.

Bangladesh detained and forcibly returned 70 Rohingya migrants to Myanmar, police said Sunday, just hours after Myanmarese troops on the other side of the border had opened fire on people fleeing the country.

The Myanmar army has been accused of carrying out extrajudicial killings in the restive Rakhine region, with residents and activists accusing soldiers of shooting indiscriminately at unarmed Rohingya men, women and children and carrying out arson attacks.

END_OF_DOCUMENT_TOKEN_TO_BE_REPLACED

The routine abuse of thousands of enslaved Mauritanians, including rape, beatings and unpaid labour, should prevent the African republic from receiving US trade benefits, American labour unions have said.

Mauritania, which has one of the highest rates of modern-day slavery in the world and has been roundly criticised for its poor human rights record, is currently on a list of countries that benefit from the African Growth and Opportunity Act (Agoa). The act, designed to promote the economic development of countries that can show they uphold human rights and meet labour standards, enables African countries to export goods duty-free to US markets. 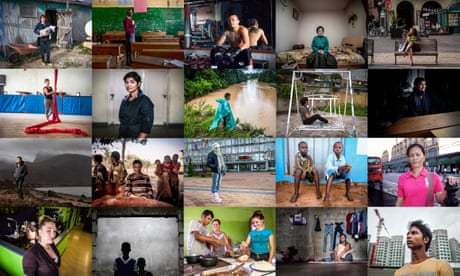 ‘Traffickers take all that makes you human’: faces of modern slavery – in pictures

The US trade union AFL-CIO, the American Federation of Labor and Congress of Industrial Organizations, this week called on the US trade representative to remove Mauritania from the roster of approved countries.

“The government of Mauritania routinely fails to conduct investigations into cases of slavery, rarely pursues prosecutions for those responsible for the practice and fails to ensure access to remedy or otherwise support victims,” the union wrote in a petition, adding that the state harasses and imprisons anti-slavery activists and will not publicly acknowledge the continued existence of slavery.