Here’s an earlier posting of an interview right after the scandal judgement was passed:

Yes, it’s a historical fact, but it’s politically inconvenient nowadays. And so it’s six months in jail for Michael Stürzenberger.

[EDITOR’S NOTE: When this article was first written and published, it mistakenly said the photo was Amin al-Husseini, the Grand Mufti of Jerusalem at the time, and Adolph Hitler. It is indeed Amin al-Husseini but it is NOT Adolph Hitler. The article has been subsequently corrected. Sorry to all for the error, and this may explain the confusion in the comments. I hope this clears it up.]

GERMANY – A district court in Munich earlier today sentenced German journalist Michael Stürzenberger to six months in jail and an additional 100 hours of charitable work for publishing this photo in his Facebook timeline.
It shows A ranking Nazi, and Amin al-Husseini, the Grand Mufti of Jerusalem, shaking hands in 1941 in Berlin.

Along with the photo, he had written a review of an article in the Süddeutsche Zeitung, ‘Hakenkreuz und Halbmond’ (“Swastika and Crescent Moon”) about the National Socialists’ admiration for Islam, and mentioned his own review of that Süddeutsche article in PI-News.

For this post, in particular the photo, the court found Stürzenberger guilty of “disseminating propaganda of anti-constitutional organizations”.
Prosecution had accused Stürzenberger of “inciting hatred towards Islam” and “denigrating Islam” by publishing the photo. A superficial onlooker, prosecution argued, could not know that this black and white photo in Stürzenberger’s timeline was a historical document.

According to PI-News, the sentence might be given as a suspended sentence for three and a half years.

“The realization that Islam is a fascist ideology was made presentable two years ago by the Egyptian political scientist Hamed Abdel-Samad with his book Islamic Fascism. Even though this was already clear to former British Prime Minister Winston Churchill (“The Koran is the Mein Kampf of the Prophet Mohammed”), but political correctness has long prevented this fact from being openly stated. The Bavarian interior minister Joachim Herrmann has now also jumped on that train and compares Mein Kampf with the warlike announcements of the Islamic state that can be read on the Internet.From there to the Koran is only a small step, which he doesn’t dare yet take. The Süddeutsche Zeitung, in an article on Friday, describes the Nazi pact with Islam and also quotes important statements by Himmler and Hitler. More information at Politically Incorrect.” 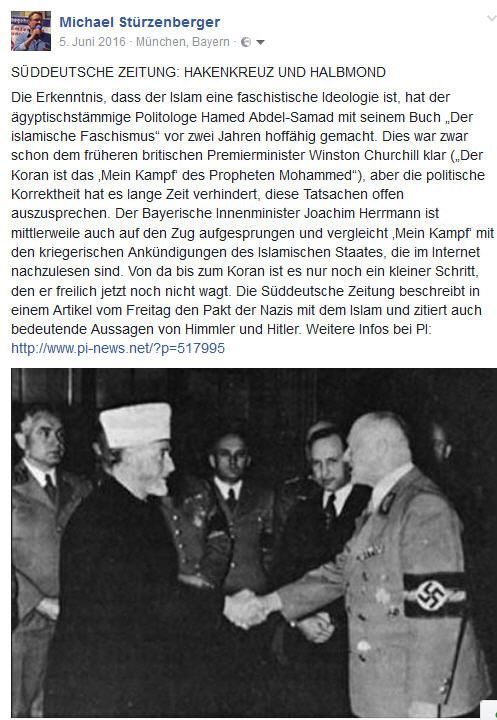