“Maggie Haberman, at the New York Times, assumed that Trump’s criticism would antagonize all Muslims.”

Just goes to show that these leftoids know exactly that all Muslims are religiously obliged to ‘strike terror in the hearts of the infidels’. President Donald Trump used three tweeted videos to highlight the hostility of Islam’s ideas towards non-Muslims — prompting a huge pushback by progressives who focused on the process, not the message.

The first video showed a Muslim youth being thrown to his death by Islamic activists during 2013 anti-government rioting in Cairo, Egypt. The rioting took place after the military removed Egypt’s Islamic government, which was controlled by the Egypt-based Muslim Brotherhood. The alleged murderer, Mahmoud Ramadan, was hanged in 2015

A second video shows Muslim destroying a Christian statue deemed by Muslims to be a false idol. Islamic law considers Allah to be the only deity and it bars worship of deceased people. The video ends with the Muslim calling for “Takbir,” an affirmation of Islamic faith. He gets the orthodox response, “Allahu Akbar,” meaning “Allah is Supreme,” which also means that Allah is the single deity supreme over all others, including Mary, the mother of Jesus.

The remaining video is widely described as a fake. It shows a normal Dutch youth — not a Muslim — attacking another Dutch youth. “The perpetrator was not a Muslim, let alone a migrant, but simply a Dutchman,” said a translated statement on the website which published the video.

Trump retweeted the videos from the “Britain First” group, which is a considered extreme in the United Kingdom. A spokesman for the Prime Minister said the group spreads “hateful narratives which peddle lies and stoke tensions.”

“The reaction is that he is endorsing a far-right group, but they describe every group that opposes jihad terror as ‘far right,’” said Robert Spencer, the author of several best-selling books on Islam and also the operator of the JihadWatch website. Trump “is not endorsing the group — he is calling attention to Muslim persecution of Christians and to the brutality of some Muslims in Islamic countries.”

In a press conference aboard Air Force One en route to St. Louis, Raj Shah, the White House principal deputy press secretary, was hit with a swarm of questions about the source of the videos, not about the aggressive doctrines in Islam:

Q: How did those tweets come to his attention?

Q: Why is the president retweeting a far-right, anti-Muslim group that’s been condemned?

Shah: Again, we’re going to be focusing on the issues that are being raised, which is safety and security for the American people. We’re talking about extreme vetting policies, ensuring that individuals that come to the United States do not pose either a public safety or terrorism threat. And the other measures that we want to take – for example, ending the visa lottery system that allows individuals to come to the United States, and replacing it with a merit-based system. Remember the eight individuals who were killed in New York City last month, the killer, the terrorist came in under the visa lottery system. So the president is going to continue talking about these issues because they’re important for the safety and security of this country

One question was asked about the threat from Muslims, prompting the press secretary to highlight the difference between individual Muslims and the states which support Islamic jihad:

Q; Does the president feel that Muslims are a threat to the United States?

Shah: No, look, the president has addressed these issues with the travel order and he issued earlier this year, and the companion proclamation. There are plenty of Muslim-majority nations whose citizens can come to the United States without travel restrictions. Those that pose public safety or terrorism threats, to our worldwide security review that was overseen by the Department of Homeland Security, is why there were certain travel restrictions put in place.

The videos marked a sharp break from the  ‘Islam means peace’ mantra pushed by President George W. Bush and President Barack Obama. In 2001, for example, just after 19 Islamic militants murdered 3,000 Americans in New York and Washington D.C., Bush visited a mosque and stood alongside Islamic activists.

Maggie Haberman, at the New York Times, assumed that Trump’s criticism would antagonize all Muslims.

“He is not shaming all Muslims,” said Spencer. “Any Muslim who is against jihad terror and against Sharia oppression should be on his side.”

Other progressives portrayed the criticism as “prejudice,” and did not focus on the contents of Islamic doctrines, such the claim that Allah is supreme.

I have not seen any Muslim spokesmen say ‘There is a problem [in Islam] we need to deal with.’ They are all just criticizing Trump … [President Barack] Obama did everything he could to whitewash the image of Islam — Trump is calling attention to atrocities that are committed in the name of name of Islam.

[President Ronald] Reagan had the courage to say to [Soviet leader Mikhail] Gorbachev ‘Tear down this [Berlin] Wall!’ when no-one else dared to challenge the Soviet Union, and Trump is behaving in the same manner… [This] could change the conversation and would bring out in the open the oppression we are not allowed to speak to… [Now] we’re stigmatized and demonized as ‘Islamophobes’ for talking about it.

When critics denounced the message because of the one false video, the White House spokesman responded by saying “whether it is a real video, the threat is real. His goal is to promote strong border security and strong national security.”

Donald Trump retweets videos of Muslims being violent, Labour MPs call for him to be banned from UK events

UPDATE: Dutch media is now claiming that the video purporting to show Muslim migrants bullying is a Dutch boy actually doesn’t depict any Muslim migrants. Lost in the controversy is the fact that Muslim migrants have been responsible for a crime wave across Europe.

The three tweets that President Trump retweeted show a Muslim migrant gang beating up a disabled Dutch boy, a Muslim smashing a statue of the Virgin Mary, and a Muslim mob pushing a boy off a roof. Sky News calls them “anti-Muslim videos,” yet if Muslims really reject jihad terror and Sharia oppression, they shouldn’t have any problem with them, as they should abhor this behavior as much as the President does. This reflexive label from Sky News shows that they know that far more Muslims than they’re willing to admit openly actually condone this kind of behavior. Metro calls the videos “Britain First propaganda,” and Sky implies that as well in writing: “The group’s deputy leader Jayda Fransen, who posted the unverified clips, claims one of them shows a Muslim destroying a statue of the Virgin Mary.”

In reality, Britain First did not originate these videos. They’ve all been circulating for a long time. The rush on the part of the British intelligentsia to condemn Trump and Britain First, rather than to address the atrocities in the videos, is all of a piece with the general Western unwillingness to address jihad terror and Sharia oppression, and instead to consign all concern for it to the realms of “Islamophobia.” This is the phenomenon I discuss in my new book Confessions of an Islamophobe — get your copy here now. 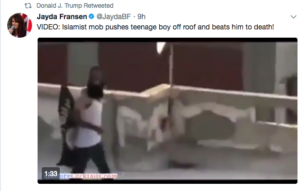 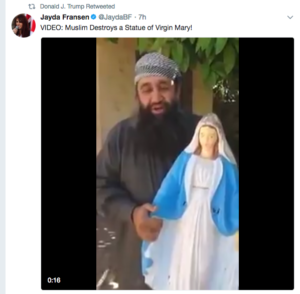 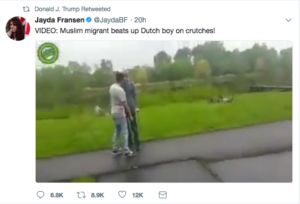 The group’s deputy leader Jayda Fransen, who posted the unverified clips, claims one of them shows a Muslim destroying a statue of the Virgin Mary.

She claims the other two videos show attacks carried out by other Muslims.

After sharing the posts with his 43.6m Twitter followers, Mr Trump fired off three other tweets praising the US stock market, suggesting a boycott of “fake news CNN” and commenting on the sacking of NBC presenter Matt Lauer….

(That would be Muslim MP’s who should not have a say in British politics, as well as the communist subversive Jeremy Corbyn, who will, hopefully, never be PM)

MPs have reacted angry [sic] to Donald Trump retweeting Britain First propaganda, with some calling for him to be banned from events in the UK.

Labour leader Jeremy Corbyn said: ‘I hope our Government will condemn far-right retweets by Donald Trump. They are abhorrent, dangerous and a threat to our society.’

Naz Shah, Labour MP for Bradford West, said: ‘I will be writing to the Home Secretary this afternoon.

‘If a Muslim leader was found sharing extremist content – and was speaking at a conference, local councils under their duty to prevent radicalisation, would get involved and cancel the conference.

‘I think it is clear that if the President of the USA comes into this country, the Home Office might have to contact the government and request any sessions be cancelled.’

Stephen Doughty MP raised a point of order in the Commons about the ‘shocking Trump tweets’, saying there were ‘very serious concerns given content and ongoing criminal proceedings.’

Green Party MP Caroline Lucas, who said: ‘The President of the US has just retweeted a convicted British fascist. Theresa May must publicly condemn him immediately. We cannot stand by and watch Donald Trump spew this hate.’…

One thought on “Left Lashes Out Against Trump’s Tweets, Does Not Question Islam”