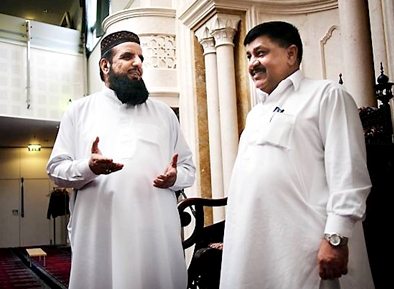 Our Norwegian correspondent The Observer sends his translation of an article and interview with two respectable high-profile Muslim leaders in Oslo, who have strongly negative opinions about Jews and the worldwide Jewish conspiracy. The Observer notes:

A new trend seems to have developed in the Islamic community in Norway: grab hold of a journalist and speak your mind on issues such as stoning, adultery, apostasy and Jews — and don’t hold back.

This article deals with the twisted views of the imam and the chairman of Norway’s largest mosque. It should also be pointed out that this is the same mosque that the Norwegian police apologized so profusely to last year for the fact that we have freedom of speech in Norway.

The translated article from Dagsavisen:

Controversial: Many Norwegians have a negative view on Islam due to Jewish domination of the media. This accusation is made by the imam and by the chairman of Norway’s largest mosque.

We are visiting Central Jamaat-e Ahl-e Sunnat, the mosque with the largest member base in Norway, to talk to its spiritual leader. The mosque was founded in 1977 and currently has more than 5,000 members. The Cultural Center in Grønland in Oslo can accommodate 2500 people during prayers. The spiritual leader, Imam Nehmat Ali Shah is not fluent in Norwegian, so every now and then Chairman, Ghulam Sarwar has to translate from Punjabi.

“But we have the same opinions,” says Sarwar while the imam nods and smiles — he looks both stern and benign at the same time.

They have the ‘same opinions’,  means they are part of a collective and should not be seen as individuals.

The subject of the interview is the relationship between the major religions and Norwegians’ attitudes toward Islam. The Imam begins by explaining that all three heavenly religions, Judaism, Christianity and Islam, are sacred to them. Many people are unaware of this fact, says Sarwar.

The imam is lying. Muhammad declared all other religions superseded by Islam. This “Abrahamic religions” claptrap is only to deceive.

Then a statement is made that many will find far more problematic.

The obsession with Jews & hatred of them is something ever Muslim sucks in with the mothers milk.

“Schoolchildren visit the mosque regularly and some of the students may think that we are against Christianity,” says Sarwar. Both of them believe that the school visits confirms their views that Norwegians in general have an inaccurate impression of Islam and Muslims.

“…some may think that we are against Christianity?” But of course! That is the purpose in life of the imam & all Muslims in the West. That’s the purpose of having a mosque.

“Students, journalists and people like you ask the same questions over and over again — about forced marriage, hijab and whether females can become imams.

They as the same questions but all they get is lies:

“No one can be forcefully compelled to marry in Islam, but parents can assist in finding the right partner, and no, women cannot become imams. People are ignorant because they get their information from the media, and the media only write negatively about Islam. Judaism has a better grip on the media,” says Sarwar.

The Jews control the media? Hardly. Mohammedans have far more influence in today’s media & intimidation does the rest.

“Why do the media only write negatively about Islam?”

“Because the media has Jewish roots. The Jews control the media and that’s detrimental. Only a handful of people were behind the movie about Mohammed in the U.S. and they didn’t have a lot of money. So who was financing them, who was backing them?” asks Sarwar, referring to the anti-Islamic film The Innocence of Muslims, produced by a Christian Egyptian Copt living in the USA.

Jihad terror is caused by Islam & Moslems, not by Jews, not by movies about Muhammad or anything else…

“Who are the Jews behind this in your opinion?”

“How did the Jews manage to attain such media power?”

“Because of education and business.”

So? Is the imam saying that Muslims have no education? Are they too dumb to do business? Hardly.

“Jews have immense commercial power that stretches around the world,” repeats the Imam through Sarwar.

Arab Muslims have received in excess of 50 trillion dollars  for oil, of which a huge amount is ploughed into the global jihad. The OIC, the Muslim block of 56 & a half nations, rules the UN. Jews don’t have that power. Israel is a victim of their vicious attacks.

“What is the relationship generally between Jews and Muslims?”

“It has never been good.”

“Why did the Germans kill them? One reason is that they are anxious people,” says Sarwar.

They deserved it, you see? The Qur’an is full of verses disparaging Jews. Muhammad murdered all Jews in Arabia & sold their wives & children into sex slavery.

Mohammedans don’t do “dialogue”, they do da’awa.

“But at the same time you do say positive things about Judaism, that it is sacred?”

“Yes, we’re not saying that Jews should be killed or anything to that effect. Moses is our prophet, but some people only want to ruin things,” says Sarwar.

Of course they are saying Jews should be killed. Just about every day another imam is being exposed citing “sacred” verses calling for murder.

“The Quran says that we should accept all the prophets of Judaism, Christianity and Islam — from Moses to Jesus. If we speak ill of the prophets we would be contradicting our own books, but it’s not like that for Jews and Christians,” adds Al Shah.

The biblical prophets are twisted, blasphemous creatures in the Qur’an, and have no resemblance to what Jews & Christians believe.

“What do the media want to achieve by writing negatively about Islam?”

“They want to prevent Islam from growing.”

Islam must grow & anything, or any one who impedes that growth of Islam is an enemy of Islam & must be killed.

The Imam confirms what Sarwar is saying

“Dialogue is very important to us. You may find disagreements, but that doesn’t mean that we should stop talking to each other. Dialogue is the only way,” says Chairman Ghulam Sarwar while Imam Ali Shah Nehmat nods affirmatively.

Try it. Its like nailing jelly to the wall. There is never any “dialogue”, only propaganda & threats.

Rune Ottosen, a professor of journalism from the University College of Oslo, reacts strongly when he hears about the remarks made by the two leaders of the Mosque:

“This sounds like anti-Semitic conspiracy theories of the worst kind,” he says.

The Arab/Muslim mental baggage doesn’t come without it.

He points out that the Norwegian media landscape is dominated by NRK, TV 2, Schibsted and A-pressen.

“The fact that they can actually think in such terms is so far removed from reality that I find it difficult to take them seriously. It is impossible to debate on such a basis,” says Ottosen.

We cannot coexist with people who deeply believe that murdering us is a sacred cause that pleases Allah.

Media coverage is mostly skewed in favour of Islam, not against them.

“Of course prejudices exist, and yes, let’s talk about it. But the debate needs to be based on an actual knowledge of the Norwegian media landscape. These allegations are something entirely different. When such prominent figures say things like that, it just reaffirms that there are fundamental anti-Semitic sentiments within the Muslim community.”

You bet there are. But these allegations will never go away. Muslims will still blame the Jews even if they control the media and all institutions. That’s what we’re up against.