European politicians talk about tolerance and respect, but is there is a single one engaged in the defence of their own people, culture and country? Is this a perverse, abnormal first in the history of mankind? Mogherini, like most of the top apparatchiks of the EUSSR, is a hardcore communist. Beats me how these unelected scumbags wrangled themselves into a position where they can rule over us.

EU vows push to make Jerusalem capital for “Palestinians,” too

Useful Idiots to the bitter end. The EU has indefatigably enabled and abetted the “Palestinian” jihad, and is determined to continue doing so, heedless of the ideological congruity of “Palestinian” jihad groups and jihad groups in Europe. Before too very long, Europe at large will be a jihad war zone, and these EU politicians can congratulate themselves, as the jihadi blade begins to slice through their necks, that they always supported “Palestinian” “rights.” 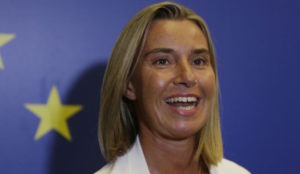 “EU vows push to make Jerusalem capital for Palestinians too,” Reuters, December 7, 2017 (thanks to JW):

BRUSSELS – The EU’s top diplomat pledged on Thursday to reinvigorate diplomacy with Russia, the United States, Jordan and others to ensure Palestinians have a capital in Jerusalem after US President Donald Trump recognized the city as Israel’s capital. What could be worse than Jews wanting J’lem to be their undivided capitol? How dare these uppity Jews celebrate J’lem being their capitol!

“Jerusalem is recognized as the capital by the United States of America, so the windows of an Israeli restaurant in Amsterdam are smashed. Only logical.”

Yes, the logic of jihad.

Actually, its because Muselmaniacs apply collective guilt. If one infidel transgresses, all infidels are collectively guilty and must be collectively punished.

AMSTERDAM — Police are investigating the smashing of the windows of a kosher restaurant in a heavily-Jewish part of the Dutch capital by a man wearing a Palestinian flag.

Tingles still not getting over his man-crush with the Obamessiah… U.N. pushing for $65 million to teach Palestinians to fight Israel

The American Center for Law and Justice, long an advocate for America’s top Middle East ally, is asking the U.S. ambassador to the United Nations to fight a plan to turn over $65 million to Palestinians to teach them to fight Israel in the courts.

U.N. officials said they would pay the Palestinian Authority “to wage lawfare against the state of Israel,” ACLJ said.