The Guardian communists smear Salvini as being “far-right”

I guess we are all “far-right” these days.

A solidarity demonstration in Riace for Mayor Domenico Lucano, who is accused of encouraging illegal immigration.

Italy’s far-right interior minister, Matteo Salvini, has ordered hundreds of refugees to be moved out of Riace, a small town in Calabria celebrated around the world as a model of integration.

The decision, which follows the house arrest earlier this month of the town’s mayor, Domenico Lucano, effectively shuts down a project that also provided work for Italians.

Salvini wrote on Twitter: “Who makes mistakes, pays. We cannot tolerate irregularities in the use of public funds, even if there’s an excuse to spend them on immigrants.”

A circular sent to the town on Saturday listed “funding irregularities”, including discrepancies between the amount of money provided by the government’s “Sprar” system for refugee reception and the amount spent on the services cited when applications for assistance were made, as reasons for the minister’s decision. The circular also said that migrants overstayed the time limit permitted by the Sprar system and that conditions were unhygienic. It is unclear where they will be transferred.

Lucano, who won prizes for an integration project that began in the late 1990s, said in a statement that the ministry is “out to destroy us” and that he would appeal against the decision. Mario Oliverio, the president of Calabria, said the move was “absurd and unjustified”. “I hope the objective behind the decision isn’t to stop a reception project that has been extremely positive, appreciated and recognised internationally,” Oliverio added. 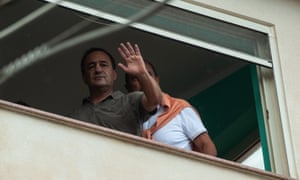 Domenico Lucano waves at demonstrators from his home.
.
Lucano was placed under house arrest for allegedly encouraging illegal immigration. The main accusation against him is that he organised “marriages of convenience” after it emerged that he helped arrange a wedding between a Nigerian woman and Italian man so that the woman, who had been forced into prostitution in Naples, could live and work in Italy legally. His partner, Tesfahun Lemlem, faces the same charges and has had her residency blocked.

He is also alleged to have flouted the public tender process by awarding waste collection contracts to two co-operatives that were set up to assist migrants in their search for work. The investigation against him began over a year ago, although the more serious allegations of embezzlement and fraud were dropped.

Salvini, who has pledged to slash funds for all migrant reception and integration services, welcomed the news of his arrest, writing on Twitter: “Let’s see what all the other do-gooders who want to fill Italy with immigrants will say now.”

Lucano’s arrest also followed the suspension by the public broadcaster, Rai, of a TV show about Riace. 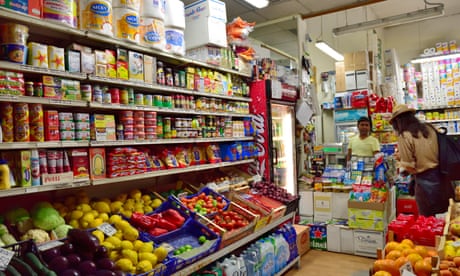 Salvini immediately took aim at Lucano after becoming interior minister in early June, describing the mayor as a man worth “zero”.

Lucano’s integration strategy helped to reignite the economy of the town: Riace’s one bar reopened, as did a handful of shops, while the system helped generate jobs for locals – as teachers, translators or cultural mediators.

Houses in the town’s “Global Village” were turned into artisanal shops, with migrants working alongside locals to make and sell products including ceramics, hats and chocolate.

Lucano had been protesting since 2016 after funds to sustain the project stopped coming from the government.

Thousands of migrants have passed through Riace since the project began, with about 500 migrants in the current population of roughly 2,300.

One thought on “Matteo Salvini orders removal of refugees from Riace”