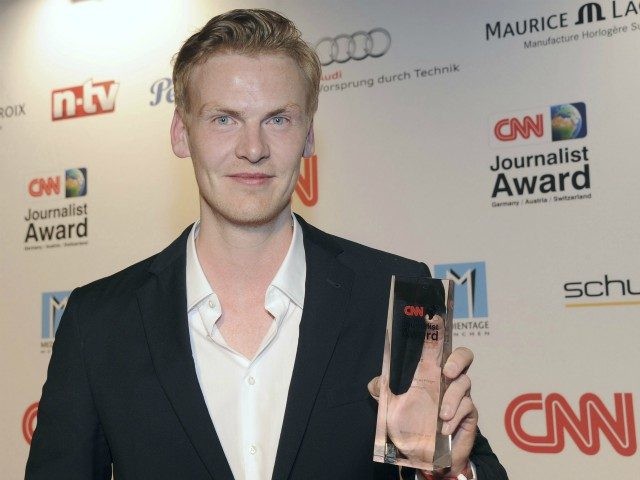 Former Der Spiegel star journalist Claas Relotius, who was exposed for inventing facts and interviews in his stories for years, has now been accused of embezzling money allegedly meant for Syrian orphans in Turkey.

Mr Relotius allegedly took donations from readers following the publication of his article “Königskinder,” which was published in July 2016, to a personal bank account. According to Turkish photographer Emin Özmen, much of the article contained fabrications and lies, Der Spiegel reports.

Özmen said that Relotius had written about a Syrian refugee boy in Turkey named Ahmed who had to bury his mother and had a sister who was forced into brutal work in a textile factory.

The problem with the story being that Ahmed’s mother is still very much alive and working in a furniture shop in Gaziantep, Turkey. The photographer said the boy did not have a sister at all, to his knowledge. The story is currently being looked in to by Spiegel.
Continued below the fold.

Germany’s leading news magazine, which was forced to apologise to readers on Wednesday after revelations of “invented stories”, has been accused of having a major anti-American bias by President Trump’s Ambassador to the United States Richard Grenell.

He got caught after he trashed Trump supporters in a recent piece. It was a completely made up story.

Claas Relotius won CNN’s journalist of the year award in 2014.

Claas admitted to fabricating interviews and sources in at least 14 articles.
The left loved him.
CNN gave him their top journalist award to this Fake News reporter in 2014.

On Friday US Ambassador Richard Grenell challenged Der Spiegel on their anti-US bias.

From Deutsche Welle Police raided a mosque and several other buildings in Berlin on Tuesday morning in an operation into suspected terrorism financing, prosecutors said. State criminal police, intelligence officers as well as special police forces took part in the raids, which included the As-Sahaba …Read More…
.

This is another grievance mongering article from Al Jazeera, but it tells you much about Arab racism & supremacy towards the blacks.

Relotius mentioned the fundraiser in a recently released journalistic anthology claiming that he had managed to bring children from the area to Lower Saxony where they are now living with a family; but this too is believed to also be made up by the disgraced journalist who now faces possible investigation from the public prosecutor’s office.

The case of Claas Relotius has sent shockwaves through not only Der Spiegel but the German mainstream media with the magazine being labelled the “lügenpresse” or “lying press” by populist opponents and others for years.

One of Relotius’s fake news stories, which involved the small town of Fergus Falls, Wisconsin, sparked the ire of many including U.S. Ambassador to Germany Richard Grenell who commented, “Spiegel literally fabricated stories saying people (Americans) were racist & xenophobic. They made up events, details, & lies — and no editor checked the stories.”

“Every real journalist should be outraged by this… Spiegel hasn’t answered as to how this fraud happened.

“One reporter was able to publish anti-American propaganda for years without an editor or fact-checker?! It’s absurd for them to pretend this is only about one reporter,” he added.

Breitbart London has repeatedly exposed the anti-Trump bias of Der Spiegel, which has included depictions of the U.S. President as a jihadi decapitating the Statue of Liberty, as well as previous examples of the publication engaging in fake news.

In November last year, the magazine published an article claiming that 15 activists of the French branch of the Identitarian movement had been arrested for illegal weapons possession despite prosecutors identifying those arrested as far-left extremists.

Following Breitbart London pointing out their spreading of fake news, Spiegel, along with AFP, corrected their articles several days later and blamed a translation error for the incorrect initial article.