“You guys are lucky that I don’t know how to build a bomb because I would have done that.”

Tnuza Jamal Hassan, a college student from Minneapolis, has been charged with intentionally setting four fires at St. Catherine’s University in St. Paul to “protest” against President Trump.

New York Post scribblers may not be Islam savvy, but it’s important to point this out:  the Moslem Ilhan Omar knows exactly what she is saying.  She carries the mental baggage from a 7th century ideology which sees all unbelievers as subhuman, and Jews termed “monkey & apes” by its founder. Watch what she says and you will find the verses for it.

Remember, Children were being Trained by these Islamic savages  to be FUTURE SCHOOL SHOOTERS!—FOXNEWS.COM 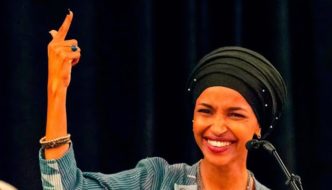 Robert Spencer in FrontPage: Fox Condemns Pirro for Asking if Omar is Pro-Sharia

The fair and balanced network is now as unfair and unbalanced as the rest of them. 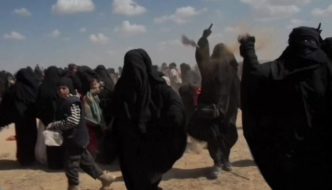 Next week the same BBC reporter will probably write a piece about some poor Islamic State bride who wants to return to the U.K. or U.S., and is being kept out by greasy Islamophobes. “Islamic State women defiant in face of lost caliphate,” BBC. 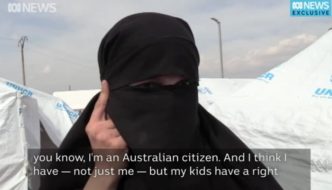 Australia: ISIS bride who called for violence against non-Muslims wants to return, says “we have human rights”

The establishment media continues its full-court press to try to shame Western countries into allowing Islamic State jihadis to return. They willingly joined an entity that is (not was) avowedly at war with non-Muslim countries, and that has repeatedly called for attacks on innocent civilians in Australia and elsewhere. The Australian authorities would be crazy to let Zehra Duman return. And they just might be.

A 19-year-old former student at St. Catherine University allegedly set several fires across campus Wednesday in retaliation for U.S. military intervention in Iraq and Afghanistan, according to charges filed Friday.Tnuza J. Hassan, of Minneapolis, allegedly told police that “she wanted the school to burn to the ground and that her intent was to hurt people,” according to the complaint charging her with one count of felony first-degree arson filed in Ramsey County District Court.

According to the charge, Hassan said similar attacks happened on “Muslim land” and no one cared if Muslims were hurt. She told police and fire investigators, “You guys are lucky that I don’t know how to build a bomb because I would have done that.”

No one was hurt in the incident that began about 11:40 a.m. with the first reported fire, and ended about 2 p.m. with Hassan’s arrest on campus. Ramsey County jail records show that she was arrested at the school’s Jeanne d’Arc Auditorium at 2004 Randolph Av.

Hassan made her first appearance in court Friday afternoon, where bail was set at $100,000. She was also ordered to stay away from the campus and surrender her passport.

Hassan wore an orange jumpsuit under an apparent makeshift hijab that consisted of a black face covering that exposed only her eyes and what appeared to be a large white sheet draped over her head.

Hassan’s attorney, Patrick Nwaneri, asked for $5,000 bail, noting that his client had no criminal record. Ramsey County District Judge Sophia Vuelo rejected the request, saying that Hassan was a threat to public safety.

Her next court appearance is an omnibus hearing scheduled for Feb. 28.

Court documents gave this account of the events and Hassan’s motives:

“She said she had been a student at Saint Catherine’s but quit last fall because she and her family were planning to vacation in Ethiopia,” the complaint said. “Hassan said she started the fires because she’s been reading about the U.S. military destroying schools in Iraq and Afghanistan and she felt that she should do exactly the same thing.

“She said that her fire-starting was not as successful as she had wanted. She said the most successful fire she set was at Saint Mary’s [residence hall] where she set a couch on fire.”

Gaede said the largest object burned was a chair in St. Mary’s.

Fire and school officials said on Wednesday that eight fires were set in seven buildings. They said all but one of the eight fires occurred in garbage cans, and that most caused little damage.

Dennis Gerhardstein, a spokesman for the Ramsey County attorney’s office, said authorities charged Hassan for the number of fires — four — that allowed prosecutors to file the “most severe form of felony arson.”

The fire in St. Mary’s was extinguished by a sprinkler system. The complaint said 33 children and eight adults were at a day care in the building at the time. Galvin said that 10 to 15 students were also evacuated from the building.

Campus surveillance video showed a woman entering St. Mary’s before the fire broke out, the complaint said. She was carrying a plastic bag. The woman was recorded entering and then leaving the student lounge before the sprinklers were activated.

Police later found the bag with the box of matches discarded in a bucket.

Hassan allegedly told police that she had written a letter to her roommates containing “radical ideas about supporting Muslims and bringing back the caliphate,” the complaint said.

The letter frightened her roommates, who provided it to campus security.

Court records show no history for Hassan. She was a St. Paul Public Schools student, first enrolling in the district in 2010 at Highland Park Junior High. She graduated from Johnson Senior High in 2016, according to the school district.