Or are we still sleeping? Turkish President Recep Tayyip Erdoğan’s efforts to create “devout generations” of Muslims, through the establishment of numerous state-funded Imam Hatip religious schools, may not be having the desired results.

There is nothing ‘moral’ about people smuggling. In fact it is morally repressible to flood Europe with unassailable savages. That’s only to feed the newspapers. 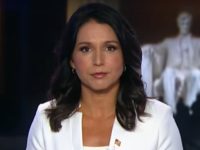 Tulsi Gabbard: ‘Al Qaeda Is Stronger Now Than They Were on 9/11’

Islam. Islam is getting stronger. Not al Qaeda. That’s just a tiny minority of excremists.

Islamic terrorists carried out their most successful attack on America with the murder of 2,977 people. And the number of immigrants obtaining permanent residency passed a million for the first time in a decade. Before 2001, a million plus was a streak that might linger for a few years before falling back.

These days it’s the new normal. Aside from one blip, we’ve been riding the million plus train for over a decade. The resistance to that trend is currently the one thing we seem to have learned from 9/11.

After decades of being massacred by terrorists who have come here as tourists, refugees and immigrants, we are finally trying to close the door on travelers from Islamic terrorist states.

That’s because learning nothing from the past has been our specialty.

“A flag bearing a crescent and star flies from a flagpole in front of the World Trade Center, next to a Christmas tree and a menorah,” The New York Times reported in 1997.

Four years earlier, Muslim terrorists had bombed the World Trade Center in an unsuccessful effort to bring down the towers. Omar Abdel Rahman, the blind sheikh at the center of the terror plot, had urged, “We . . . have been ordered with terrorism because we must prepare what power we can to terrorize the enemy of Allah and your enemy. The Koran says ‘to strike terror.’”

Mohammed T. Mehdi, the Muslim activist responsible for the flag of Islam flying at what would become Ground Zero, had been an adviser to Rahman. The U.S. Attorney’s Office had listed Mehdi as an unindicted co-conspirator in the trial of the blind terror sheikh. And nevertheless, the flag flew.

Imam Sirraj Wahhaj, an unindicted co-conspirator in the bombing, who had testified as a character witness for Rahman, had already become the first Muslim cleric to present an invocation prayer to the House of Representatives. He was introduced by Rep. Nick Rahall who had proposed the idea. The invocation included a Koranic curse aimed at Christians and Jews.

That same year, President George H.W. Bush had taped his own Eid message for Muslims.

In 1996, Hillary Clinton inaugurated the first Eid event at the White House. Capitol Hill politicos held their own Iftar event that year. Regular Islamic prayers began to be held on Capitol Hill in 1998. The State Department hosted its first Iftar event in 1999. So did the Pentagon. All of this is still going on.

Not only haven’t things gotten better since then, they’ve gotten much worse.

The height of our counterterrorism efforts took place after September 11 with Operation Green Quest. That was our last serious effort at cracking the infrastructure of Islamist terrorism in this country. These days counterterrorism mainly consists of informants and undercover operatives catching lone ISIS supporters before they carry out an attack. Going beyond that was unacceptable even before Obama.

Under Obama, the Muslim Brotherhood was in the White House and Hezbollah had a free hand.

The War on Terror also reached its height in the creative and relentless attacks on Al Qaeda and the Taliban after 9/11. But, before long, that campaign degenerated into nation-building, endless legal proceedings for captured terrorists in the Bush era, and feeding thousands of soldiers into a meat-grinder with restrictive rules of engagement and negotiations with the Taliban in the Obama era.

By 2003, our response to Islamic terrorism had reached its peak. It’s been downhill from there.

It took 4 years for the lessons of the World Trade Center bombing to be so thoroughly forgotten that an unindicted co-conspirator was able to get the flag of Islam flown at the site of the twin skyscrapers.

It took even less time for the lessons of 9/11 to fly away leaving behind hollow memorials.

After Qari Yasin, a top Al Qaeda terrorist, whose terror plots had killed U.S. Air Force Maj. Rodolfo I. Rodriguez and Navy Cryptologic Technician Third Class Petty Officer Matthew J. O’Bryant, was taken out in an airstrike, there was no mention of the fallen American military personnel killed by his attacks.

Instead Secretary of Defense Jim Mattis, the point man for the tough bombing campaign against ISIS, declared, “The death of Qari Yasin is evidence that terrorists who defame Islam and deliberately target innocent people will not escape justice.”

20 years after the flag of Islam flew at the World Trade Center, we were no longer killing Islamic terrorists to avenge our dead or even to defend ourselves, but to punish those who “defame Islam.”

Meanwhile, Kris Bauman, who had argued that, “the Obama Administration must find creative (but legal) ways to include Hamas in a solution” held down the position of Senior Director for Israeli, Palestinian, Jordanian and Egyptian Affairs from 2017 to 2018 until John Bolton took over the National Security Council. These days, Bauman heads the Eisenhower Center at the Air Force Academy.

The problem is structural.

Our national security infrastructure and our entire strategic apparatus is run by people who think like Mattis and Bauman. It’s run by them under Democrat and Republican administrations. Their views represent the consensus that terrorism can’t be defeated, it can only be defused or appeased.

There’s been some debate over whether we should be negotiating with the Taliban.

And yet our foreign policy apparatus insists that we can’t pull out until we get the Taliban to commit to respecting Afghanistan’s constitution. Why do we care about the Afghan constitution anyway? Did thousands of Americans really die in Afghanistan to uphold a constitution that upholds Islamic law?

Or did we begin this war to avenge our dead and to punish the perpetrators and their allies?

The debate over interventionism and appeasement has left September 11 behind. The interventionists insist that we have an obligation to spread democracy and the appeasers claim that we’re warmongers

Neither side likes this country very much. And neither side cares about what happened on this day.

If we are to have a meaningful strategy, it has to begin on a fall Tuesday. It has to start in the cockpit of one of the hijacked planes. It has to start with a prayer from a terrorist and from one of his victims.

“In the name of Allah, the Most Merciful, the Most Compassionate,” a terrorist declares on the Flight 93 cockpit recording. That’s followed by the sounds of the terrorists assaulting a passenger.

Flight 93 is a reminder that we are a brave and courageous people. But that we have to wake up first.

And to wake up, we have to understand what it is we’re facing. On September 11, 2001, hundreds, thousands, tens of thousands, and eventually millions of Americans were forced to wake up.

Some died. Most went back to sleep. And some still remember.

9/11 was neither a beginning nor an ending. The war we are in has gone on for over a thousand years. It might go on for another thousand making a mockery of the appeasers who lecture about “endless war.”

But until we understand that, we will have learned absolutely nothing from September 11, 2001.

This is not WW2. It’s not the Cold War. It’s a clash of civilizations. Technology, jet planes and the internet, have allowed our civilizations to overlap each other. War is the inevitable result.

Immigration, not bullets and bombs, is the main weapon of a clash not between armies, but civilizations.

16 years later, we have only begun, not to fight, but to defend ourselves against a clash of civilizations.