Naturally, Kerri-Anne didn’t talk about the stats either (woman) and said something along the lines of “won’t somebody please think of the children” and then she told Yumi her glasses made her look like a whore. I think. 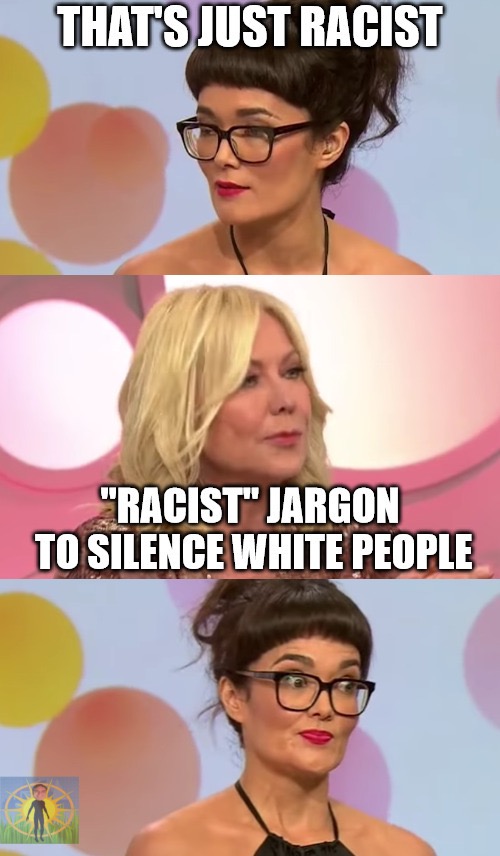 The cat fight above is a perfect illustration of how the traditional left-right dialectic has been fought over the issue of aboriginal suffering for the entire modern era.

The left don’t believe in personal responsibility, and instead blame all social ills on “disadvantage” and marginalisation, thus their own two-fold approach:

However, the conservative approach will only ever work to a point. It takes what works for us Europeans and applies it to non-Europeans. It fails to take into account the average IQ difference between races, and it ignores the nationalist perspective that people find meaning in having their ethnic/racial/national identity tied to a homeland, and that we wish to live freely as a people, with our own people, in our homeland.

Therefore, although conservative derision of far-left NPC signalling on aboriginal issues is warranted, the virtue signalling does have a point.

It chips away at the culture and historical legacy of the dominant majority British people – us – while steadily raising the status of aboriginal history and culture artificially to the same level. It is designed to make white people hate our culture, hate our history, and ultimately to hate ourselves – hence the majority white “Invasion Day” marches across the country. It co-opts white people to fight for aboriginal interests and against white interests.

Understanding this, we see that virtue signalling actually leads to concrete results.

But are three key aspects to our thinking as Real Australians – Australians of British and European heritage – which we need to change to fully understand the Cultural Race War we are engaged in:

The Turks originally hailed from Central Asia, and over the course of several centuries they successfully invaded the heart of the Greek/Roman/Byzantine Empire on the Anatolian Peninsula, which is now known as Turkey. It is highly unlikely that the Turks will ever apologise for this and pack up to Central Asia from whence they came. Asia Minor is now for all intents and purposes the homeland of the Turkish people.

Australia was invaded by the British in the late 18th Century, and over the course of a bit over a century, an antipodean homeland was established for people of British heritage in Australia. The massive technological gap that existed between the British and the aborigines does not make it any less an invasion than that of the Byzantine Empire by the Turks. Our ancestors colonised and settled Australia just as the Turks colonised and settled Anatolia. Both were as a result of invasion.

(The Mabo decision, which states that Australia was settled, not invaded, is simply incorrect.)

This next bit is important.

There is absolutely nothing wrong with this.

It is a sign of national health to do so and it is vital to perpetuate a nation.

This is because aboriginal people are a defeated people. This is the key point that conservatives miss when addressing aboriginal disadvantage and it is why the virtue signallers actually have a point. Weird, disturbing things happen to people who have been defeated and live either scattered across the globe or defeated in what was once their own country. They take preserving their culture, history and bloodlines to new levels of fanaticism; they to turn to parasitism to survive; yet the knowledge that they are a defeated people robs them of hope and purpose and manifests itself in the form of social ills such as physical and sexual abuse, drug addiction and suicide.

Sometimes when people are defeated by a foreign people they are genocided or integrated out of existence. If allowed to linger, a defeated people can slowly kill themselves.

And this leads to the most important point:

In some parts of the the West, Europeans are now a defeated people. British or European culture is no longer the dominant culture in Australia. Cultural Marxism is the dominant culture, and this is a foreign culture imposed by a foreign people. This defeat is now manifesting itself in rising rates of drug abuse and suicide in white communities across the West, just like those of aborigines, because as white people slip into minority and as we see our power to live freely in our homelands slip away, we are losing hope.

This is why we have to stop feeling sorry for aborigines.

If we don’t stop feeling sorry for aborigines, we are going to end up just like them.

The solution is to embrace our identity as conquerers. Just like nearly every other race of people on the planet do.

There is a dark flipside to this line of thinking, however.

The logical extension of this is that the only way for aborigines to rise above their current dispossession is to take a slice of their country back. It may even be good for them if they have to fight for it.