Sure, because the jihad must continue and resisting the global jihad is evil and upsets the Muslims.

Mahatir, this racist Jew,-infidel-and white-man-hating old geezer never held back to smear the infidel world with his inferiority complexes. ‘Recalcitrant’ like the egregious Peanut Khadr, he cannot resist the limelight. 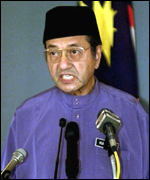 Mahathir labels Iraq coalition ‘murderers’
AP
February 05, 2007
FORMER Malaysian prime minister Mahathir Mohamad has accused George W Bush, Tony Blair and John Howard of being bigger murderers than Saddam Hussein and the September 11 attackers.
In some of his most provocative swipes yet at the Western leaders, Mahathir said today that their war in Iraq had caused worse terror than al-Qa’ida’s suicide bombers around the world.

“What Blair and Bush have done is worse than what Saddam had done,” Mahathir, 81, said in a speech to inaugurate a three-day conference organised by his non-government organisation, Perdana, and aimed at criminalising war.

On Wednesday, conference delegates are expected to formally launch a war tribunal that would hold “trials” for world leaders against whom common citizens file complaints.

The tribunal will not have the legal authority of any international organisation and will not be able to impose penalties, but Mahathir said its aim is to condemn the accused in history books.

“We should not hang Blair if the tribunal finds him guilty, but he should always carry the label `War Criminal, Killer of Children, Liar’,” Mahathir said.

“And so should Bush and the pocket Bush of the Bushland of Australia,” he said, referring to Australian Prime Minister John Howard, a staunch ally in Washington’s campaign against terrorism.

Needless to mention it: He spoke at another ‘peace conference’….

You can also check the 10 ‘o clock scholar