Lauren Booth, the moonbat sister-in-law of former British Prime Minister and current quartet envoy Tony Blair, has compared the situation in Gaza with aÂ concentration campand with the situation in Darfur in the Sudan. As you may recall, Booth sailed into Gaza with the ‘blockade busting’ terrorist sympathizers, decided not to leave with them, and is now ‘stuck‘ in Gaza as a result of both the Israeli and Egyptian refusal to allow her to depart by land.

* Yes, females can be Assholes too:

In a telephone interview with Ynet on Wednesday, Booth slammed Israel’s policies and called Gaza “the largest concentration camp in the world today. I was startled the Israelis agreed to this.”

Despite her current predicament, Booth said she has no regrets. “My children are the ones who are suffering, because I’m being prevented from leaving and they can’t see me. I don’t regret it, because I wanted to come here and help these children who are suffering on a daily basis,” she said.

Booth asserted that the current siege is not the result of the policies of the Hamas government. “There’s been a siege for 20 years already. Palestinians’ freedom of movement has been restricted since the 80s. This is an inexcusable outrage on an international level.”

She spoke of the situation in Gaza and said, “Yesterday, I visited mothers of children under the age of five. Nutrition here has deteriorated threefold over the last two years because it is impossible to bring food through the crossings. Unemployment has risen, so people can’t even afford to buy what food there is left.”

When asked about Israel’s right to respond to incessant attacks emanating from Gaza, Booth evoked Holocaust-related rhetoric. “There is no right to punish people this way. There is no justification for this kind of collective punishment. You were in the concentration camps, and I can’t believe that you are allowing the creation of such a camp yourselves.”

“The Palestinians’ suffering is physical, mental and emotional,” she went on, “there is not a family here in which someone is not in desperate need of work, shelter or food. This is a humanitarian crisis on the scale of Darfur.

But what’s most curious about this piece is that there is no reaction – and maybe no attempt to solicit a reaction – from the one person who make Booth irrelevant: Tony Blair.

One person Booth doesn’t think is doing enough, is her brother in law Blair. “I don’t think he has a real idea of what’s going on here. I think that the Israeli government is working very hard to keep him in the dark.”

I doubt it. Blair can go to Gaza whenever he wants. Of course, his last trip was canceled because Booth’s friendsÂ threatened to kill him. That was nearly two months ago.

Finally, for those of you sympathize with Booth because you found her picture somewhat attractive (come on guys, you know who you are), I’ve been cheating you a little bit. That picture at the top of this post, which I have used before, is from 1998. Here’s a more recent picture. 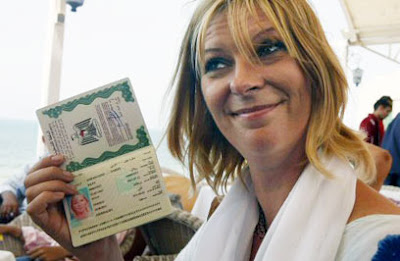 A little office safe eye-candy for the soul. Heh.