A fundamentalist Islamic sect linked to a series of terror plots in Britain has been defended as “innocuous” by the head of Scotland’s biggest mosque.

Dr Shafi Kausar, the general secretary of Glasgow’s central mosque, said Tablighi Jamaat, which has been linked to the 7/7 London suicide bombings, was the victim of “Islamophobia”.

Two of the ringleaders of an alleged plot to blow up transatlantic flights, who were last week convicted of conspiracy to murder, were also members of the sect. Abdulla Ahmed Ali, 28, the alleged ringleader, had been a Tablighi follower since his teens. Assad Sarwar, 28, its quartermaster, was also active in the movement. Mohammed Gulzar, 27, who was acquitted of all charges, claimed to be a Tablighi missionary when he was arrested.

Tablighi, whose European operations are based at a mosque in Dewsbury, west Yorkshire, has been branded a recruiting ground for Al-Qaeda by the FBI. The sect was also linked to 2001’s American Airlines flight 63 “shoe bomber” Richard Reid and Sidique Khan, the leader of the 7/7 London bombers.

However, Kausar, one of Britain’s most respected Muslim leaders, insisted that the movement posed no threat to British security and was being used as a scapegoat by the intelligence services. “It is the most innocuous group,” he said. “It is not political. It teaches people to be good, not to steal, to be kind to others. The feeling is that British and US intelligence have completely failed. They have to make their house in order.

“If they can blame Tablighi Jamaat then no-one is safe. They are the safest group of Muslims, no-one should feel threatened by them. Bush and Blair have disturbed the peace of the world unnecessarily. This is Islamophobia, but Islam is a divine theology and it will not be banished.”

Supporters of the movement â€” which was founded by scholar Maulana Muhammad Ilyas in India, in the late 1920s â€” claim it has no involvement with terrorism and simply encourages Muslims to follow the example of the prophet and proselytise (to convert someone from one particular religious faith to another) the teachings of the Koran.

However, in Scotland, senior police officers have confided that several Tablighi Jamaat followers are known to the local authorities.

“The feeling is that Tablighi Jamaat is being used as a vehicle, that some of its members are moderate but others are moving in a more radical direction and it can vary regionally, from mosque to mosque,” said a source. “In Scotland, yes, we know who some of the members are.”

The group’s links to successive terror plots in Britain have prompted calls for the government to “closely examine” the role of the movement in the radicalisation of young Muslims.

Patrick Mercer, the former shadow security minister, has urged the home secretary to launch an inquiry into the group’s activities.

“I hope that Dr Kausar is correct, but the fact remains that the name of this organisation keeps cropping up, time after time, in terrorist trials,” Mercer said recently.

“It’s overdue for this organisation to explain its aims and why radicalised individuals have associations with it.”

Shabbir Daji, secretary and trustee of the Tablighi Markazi mosque in Dewsbury, said the group was active in Scotland, including the Central and Masjid Noor mosques in Glasgow

“We are a peaceful organisation aiming to unite communities. Our activities are open and we are in local communities from mosque to mosque and town to town. We cannot be held responsible for individual acts,” Daji said.

Inside the Islamic group accused by MI5 and FBI 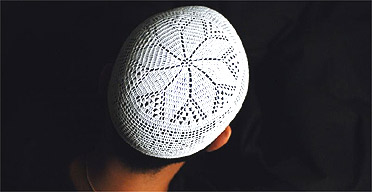 Thousands of young Muslim men are attending meetings in east London every week run by a fundamentalist Islamic movement believed by western intelligence agencies to be used as a fertile recruiting ground by extremists.Tablighi Jamaat, whose activities are being monitored by the security services, holds the tightly guarded meetings on an industrial estate close to the area where some of the suspects in last week’s terror raids were arrested.

This week it emerged that at least seven of the 23 suspects under arrest on suspicion of involvement in the plot to blow up transatlantic airliners may have participated in Tablighi events.

The organisation – influenced by a branch of Saudi Arabian Islam known as Wahhabism – has already been linked to two of the July 7 suicide bombers who attended a Tablighi mosque at the organisation’s headquarters in Dewsbury, West Yorkshire. The jailed shoe bomber Richard Reid is also known to have attended Tablighi meetings.

Until now, the leaders of Tablighi Jamaat – which means “group of preachers” – have refused to open their doors to outsiders, shrouding the organisation in mystery.

Tablighi enthusiasts say that the organisation, founded by a scholar in India in the 1920s, has no involvement with terrorism and simply encourages Muslims to follow the example of the prophet and proselytise the teachings of the Qur’an. As one sympathetic imam put it, they were the “Jehovah’s Witnesses of Islam”.

On Thursday evening, the Guardian witnessed around 3,000 men from as far afield as Great Yarmouth and the Isle of Wight stream through the backstreets of Stratford to the meeting. There, at the gates of a seemingly derelict industrial site, men in fluorescent jackets waved those who are known to the Tablighi Jamaat hierarchy under a security barrier, and into one of three fields that surround a cluster of prefabricated buildings which form a temporary mosque.

As the Guardian entered the complex one person spoke admiringly about the “main man” for the south-east division of Tablighi Jamaat. “We can’t call him a prophet,” he said. “No one can be a prophet. But when you meet him you’ll realise. He’s helped a lot of people in Walthamstow to follow the right path, the path of the prophet. He’ll talk to you openly this evening and everything will make sense.”

Seconds later, the main man stood next to his red van in Islamic dress and a smart blue waistcoat as hundreds of men, many carrying suitcases and sleeping bags, filed past him into a network of six rooms cobbled together with planks of wood and corrugated plastic windows. He later said he was from Walthamstow.

The largest room was reserved for the main speaker, an elder from Preston who spoke in Urdu. His sermon was relayed through a microphone to five other rooms in which interpreters provided simultaneous translation into English, Arabic, Sinhala, Turkish and Somali.

The English-speaking room heaved as a sea of faces, white, black and Asian, spilled into the hallway. Most were teenagers and men in their 20s and 30s dressed in Islamic dress, caps and beards. Some came in suits and ties, others in jeans and hoodies. There were old men too, who weaved slowly through to the front of the room, and a few young boys.

The Walthamstow man took a seat in the middle of the room to interpret proceedings. The murmur of hundreds of whispering voices stopped as he put on his headphones. “We come to submit our will to Allah,” he began. “We have to live the life that Allah has prescribed for us. We have been invited into Allah’s house.”

He continued to translate the preacher’s message. “If a person is drowning, the man who saves him needs to take him out of the water. If he has swallowed too much water, that water must come out. At the moment we are in a worldly ocean and we are all drowning. For us to become successful, we must come out of this world for a short period of time.”

Although not a scholar, the interpreter is deeply respected. Quietly, some in the congregation whisper that he has seen miracles – the sign of a truly committed Tablighi.

After an hour the preacher concluded with a call for followers to join the effort and commit to a trip away. “We must leave our houses, our businesses, our families, for a short period of time, and follow the path of Allah and practise the ways of the prophet, going from mosque to mosque,” said the interpreter. “Then [the behaviour] will become second nature to us. We shall go to India and Pakistan for four months to follow these ways.”

What Tablighi followers call “the effort” – travelling around the country for three days or 10 days, depending on their level of commitment – is key to the organisation. Once they have completed the first stage, they may undertake a 40-day trip, which is likely to entail travel around Europe.

Finally, a Tablighi member will be given the opportunity to take a four-month journey to Pakistan or India. During their “efforts” members are encouraged to emulate the life of the prophet and show others “the path”.

On domestic trips, members are sent to communities where they will have most leverage. In September, for example, students will be sent to universities throughout the country.

Later in the evening, the rooms are transformed into dining halls. A small group of men who know several of the Walthamstow suspects gathered round to share out plastic plates of chickpeas, lamb and naan bread, washed down with cans of peach juice and Coke.

“It will shock you but we all used to be deep into drugs and crime and all that,” said one man, in his 20s, who went on a three-day trip to Woking with one of the suspects arrested in last week’s raids. “Walthamstow used to be a dodgy area. Tablighi changed all that.”

A former body builder showed pictures on his mobile of the “pumped-up gym fanatic” he used to be. After spells in prison, he said, he went on a life-changing four-month trip to Pakistan. “I went to places you wouldn’t believe,” he said. “There are people in Pakistan and India who know less about the prophet than people in east London.”

The Urdu interpreter from Walthamstow acknowledged that Tablighi Jamaat had roused suspicions. “I know three or four people who come here regularly who are informants,” he said. “After September 11 the security services met with our elders at our headquarters and told them that they keep the flight records of every Tablighi member who travels abroad. But we are not worried. They can close us down and it will not matter because the effort will continue. We have no fear.”

He said he was not worried about the Walthamstow suspect he knows best, a young man he recently took on a 40-day trip to Scotland. “Anyone who suffers for Islam will be rewarded,” he said.

Asked about the association between Tablighi Jamaat and terrorist groups, he replied: “Tablighi is like Oxford University. We have intelligent people – doctors, solicitors, businessmen – but one or two will become drug dealers, fraudsters. But you won’t blame Oxford University for that. You see, it does not matter if someone speaks in favour or against this effort. Everything happens with the will of God.”

Another follower added: “Sometimes the youngsters say that if they saw President Bush they would chop his head off, and things like that. But we’re discouraged from talking about politics. If elders say these things it is out of anger. They’re not dangerous, they can’t actually do anything.”

By the early hours, 300 followers had volunteered for a three-day trip. One man who knows six of the suspects arrested last week leaned against the wall, the City of London glowing behind his shoulders, and adjusted his cap. “Do you see now?” he said.

“Tablighi is not the problem. It is the solution. It is another world in here, completely different from the world outside.”