Record anti-terror petition will be brought to London

* Â The last one must have fizzled… 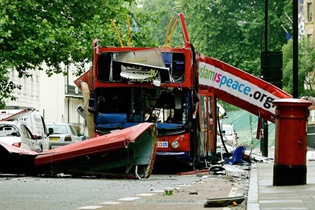 British Muslims will be asked to sign a record-breaking petition to denounce terrorism.

* The usual BS: “Muslims condemn all kinds of terrorism, i.e. Western terrorism in Islamic countries” and resisting the spread of Islam causes Muslims to wage jihad… its all our fault, of course!

Volunteers for the Yeh Hum Naheen (This Is Not Us) campaign have collected more than 60 million signatures in Pakistan – often branded the home of Islamist terrorism – in less than two months.

It will be named in the Guinness Book of Records as the most signed petition ever.

Now organisers have set their sights on Britain’s Muslims and are planning a Live Aidstyle concert.

The campaign is funded by Muslim philanthropists worried about the re-emergence of the Taliban. It is the brainchild of British entrepreneur Waseem Mahmood, who was awarded an OBE for setting up radio networks in war zones including Afghanistan, Bosnia and Iraq.

Mr Mahmood, 46, a former BBC journalist, is to approach Boris Johnson about bringing the campaign to London. He said: “Hopefully we will soon have volunteers with petitions on Brick Lane and other areas with lots of British Muslims. This is all vital in preventing another terror attack. If you start removing [terrorists’] support, you start to cut the supply line.

“I’m advocating a world anti-terrorism day in two to three years where we could hold concerts simultaneously – London could be a focal point. We are looking to approach City Hall. I think Boris would love the idea.”

Once an AIDS virus attaches itself to a human cell, it injects its own DNA into the host cell, thereby turning the host cell into a virus factory to manufacture many, many more AIDS viruses. At the end of its life, the host cell literally explodes, expelling hundreds, if not thousands, of new AIDS viruses to infect other nearby cells.

This process repeats itself over and over, until the host organism dies.

The strangest thing about the AIDS virus, like other viruses, is that its only program–its only reason to exist, is to infect other cells so that it can replicate. That’s all it does. The only thing that it produces is more duplicates of itself, all the while destroying everything it touches.

One thought on “Muslims plan new PR- campaign for Londonistan”