Harrods owner Mohamed Al Fayed has been questioned by police over allegations of a sexual assault on a girl under 16. Â Police are investigating claims the girl, reported to be 15, was assaulted at the central London department store. 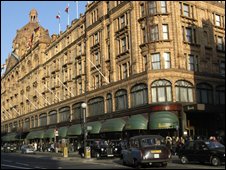 A spokeswoman for Mr Al Fayed, who has not been arrested, said he “vehemently” denied the claims.

Scotland Yard has confirmed a man attended a west London police station by prior arrangement and was interviewed under caution.

Mr Al Fayed’s spokeswoman Katharine Witty said he voluntarily visited the police station on Wednesday and spent less than half an hour there.

She said: “Mr Al Fayed vehemently denies the allegations and is confident that his name will be cleared.”

She said he was concerned details of the interview had been leaked by police and was reported in the media within an hour of it ending.

A Metropolitan Police spokesman said: “We can confirm that a man attended a west London police station by prior arrangement and was questioned under caution this morning.

“The man was questioned in relation to an allegation of sexual assault on a girl under 16 at a business premises in central London.

A spokesman for the store said it had no comment to make on the matter.

The Met’s Operation Sapphire, which investigates sexual offences in London, is leading the inquiry.

Our correspondent said detectives will collect a dossier of evidence around the allegations before sending it to the Crown Prosecution Service.

He said: “It will be they who decide whether or not to prosecute.

“There will be two basic tests – whether there is a realistic chance of any kind of conviction based on the evidence and if it is in the public interest for a conviction to be sought.”

Brushes with the law

His son Dodi Fayed died alongside Princess Diana in a car crash in Paris in 1997.

During the 1970s, a long-running feud between Mr Al Fayed and businessman, the late Tiny Rowland, resulted in a Department of Trade inquiry into the Egyptian entrepreneur.

The subsequent report, issued in 1990, concluded that Mr Al Fayed and his brother Ali had lied about their background and wealth.

Mr Al Fayed settled the dispute with Mr Rowland’s wife after his death without admitting any responsibility over the issue.

It has been suggested that the feud contributed to Mr Al Fayed’s being refused British citizenship the first time he applied.

He viewed that refusal as an affront, and at the time, said: “Why won’t they give me a passport? I own Harrods and employ thousands of people in this country.”

Mr Al Fayed has also given millions to charities such as the Great Ormond Street Hospital and set up the Al Fayed Charitable Foundation to help children suffering from illness or those living in poverty.

But further attempts to gain British citizenship have also failed.

In 1999, his application for a UK passport was rejected by the-then home secretary, Jack Straw, and he failed to overturn this on appeal.

After the first time his application for a British passport was refused, Mr Al Fayed said he had paid two Conservative ministers – Neil Hamilton and Tim Smith – to ask questions related to his interests, in the House of Commons.

Both left the government in disgrace.

Mr Hamilton had wanted to clear his name of accusations that he had accepted envelopes stuffed with cash from Mr Al Fayed in exchange for asking parliamentary questions, but subsequently lost a libel case against the businessman.

Mr Al Fayed claimed another political scalp in Jonathan Aitken, the cabinet minister who resigned after the Harrods boss revealed he had been staying free at the Ritz in Paris at the same time as Saudi arms dealers.

But it was the death of his son Dodi and Princess Diana which threw Mr Al Fayed into the spotlight.

He spent 10-years campaigning for an inquest into their deaths, claiming it had been a conspiracy by the British “establishment”.

This year, coroner Lord Justice Scott Baker dismissed his claim the pair had been murdered and said there was “not a shred of evidence” to support it.