We featured Anjem Chaudary on severalÂ occasionsÂ on this blog. Recently he announced that Sherry Jones, author of the pathetic novel ‘Jewel of Medina’ would have to be killed for blaspheming his prophet. Sherry Jones book is a lot of crock. Â But her motive for writing it is as absurd as the (inevitable) reactionÂ by the adherents of the ‘Religion of Peace:Â

* Sherry Jones:
“This is a book that honours the prophet Mohammed, it’s respectful of Islam, if anything, Muslims could use my book to gain Western converts. It paints a very positive picture of Islam,” says Jones.”Â

Anjem Chaudary has much in common with ‘Achmed, the dead terrorist’ who was just banned by the headbangers in South Africa. But Anjem Chaudary is not dead, he is very much alive and lives in the UK, where he incites, plots, spews bile and instigates his co-religionists to wage jihad against the kuffar. Â Very much like Ahmed the dead terrorist, who has become famous with the line “shut up – I kill you!” Unfortunately, Chaudary is not comical.

* Don’t wait for the moonbats from CNN to come out in favor of free speech. For them its only free Â speech as long as it doesn’t offend Muslims.

Here’s the interview with Sherry Jones from CNN:

Stay tuned and weigh in. The book should be on America

LONDON, EnglandÂ â€“ Anjem Choudary practises and preaches Islamic Sharia law. When we discussed the book, ‘The Jewel of Medina’, and the insult that he believes it brings upon the Prophet Mohammed, he could not have been more categorical: The punishment is death. 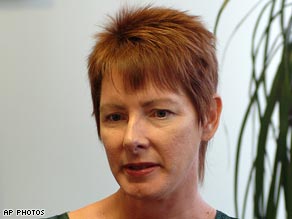 So I asked him about the personal security of the book’s American author, Sherry Jones.

“You think her life would be in danger?” I asked Choudary.

“I think certainly, you know there will be consequences for her”

We reached Sherry Jones in her hometown of Spokane, Washington. She told us despite firebombs and threats, she is not afraid.Â Watch my story here.

Jones says she wants her book out now, more than ever and as soon as possible.

“I’m eager for my book to come out as soon as possible, that people will read the book and they’re going to say; ‘Gosh, what’s all the furore about?’ This is a book that honours the prophet Mohammed, it’s respectful of Islam, if anything, Muslims could use my book to gain Western converts. It paints a very positive picture of Islam,” says Jones.

But in the two decades since the publishing of Salman Rushdie’s ‘Satanic Verses,’ whether or not Jones’ book offends is really not the issue. Some editors admit a chill has swept through many booksellers and newspapers and self-censorship is practised more than ever.

Roger Alton, editor of The Independent newspaper in Britain, says although no British editors agreed to print the Danish cartoons of Mohammed after that controversy, it was a mistake. Alton says he is concerned that the guardians of free speech are giving in to fear and bullying.

“You’re going to get intimidated by fanatics and the sort of whole concept of freedom of speech, which is a very important part of Western democracy, is going to be weakened, limited and jeopardized and once you do that then tyranny is around the corner,” says Alton.