* Â It seems to come in waves: what began in Londonistan continues like wildfire all over the EUrabian continent:

“He is Admired Who Respects His Family”

* Which makes ‘honor killing’ so respectable in Muhammedan society…

Below is a report on the latest Islamic public relations campaign in Austria, as observed by our Austrian correspondent ESW.

Interesting things one notices nowadaysÂ while stuck in traffic: 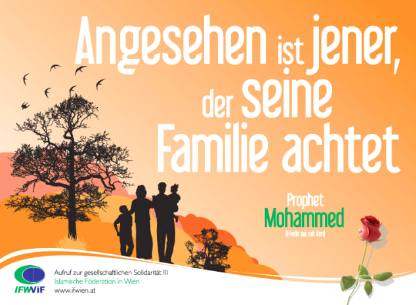 These so-called rolling boards (translation: “he is admired who respects his family”) can be found all over the place now, especially near traffic lights, where the bored driver can receive Islamic inspiration. How very helpful in times of financial and other crises! Muhammad’s words are so very comforting….
Â Â Â Â

Conveniently enough, those wanting to find out more about Islamic family values can go straight to the promoters’ website and will find that a group by the name ofIslamische FÃ¶deration in WienÂ ( Islamic Federation in Vienna) is behind this social warmth campaign. They are certainly worth a closer look. According to the mission statement found on their website (my translation): More

Raeed Tayeh, who will lead today’s event, is former head of the public relations office of the Muslim American Society, a national civil rights group. He also served as a speechwriter for Congresswoman Cynthia McKinney, D-Georgia. His articles have appeared in major newspapers and magazines, and he has been a guest speaker on several radio and television programs including, “The O’Reilly Factor.” Tayeh is also the author of “A Muslim’s Guide to American Politics and Government.”

I glad the reporter from theÂ RockyÂ knew how to type, so she could transcribe this from the press release word for word. Either that, or she can cut-and-paste with great aplomb, with the same great skill I used to bring it to you. Actually being a reporter, and finding out something about her subject seems to be beyond her, at least when she’s on deadline.

Harmless enough, “national civil rights group,” probably gave Congresscreature McKinney lessons in how to use a cell phone for self-defense (hint: it doesn’t seem to involve dialing 9-1-1, you know, the Capitol Police). Sacrificial lamb for O’Reilly.

Turns out he probably wouldn’t want to use McKinney as a reference, and not just because she doesn’t carry much weight in the part of the world not labeled “Criminally Psychotic.” Congressthing McKinney fired him after heÂ wrote a letter toÂ The HillÂ [6] objecting to some Representatives’ support for Israel:

What is more disturbing to me is that many of these pro-Israeli lawmakers sit on the House International Relations Committee despite the obvious conflict of interest that their emotional attachments to Israel cause.

The Israeli occupation of all territories must end, including Congress.

He fancies himself an Arab-American Walt Whitman, as wellÂ [7]:

Oh how I dream of that wonderful day, when our flags are raised, and when the marching bands will play. When the young will cheer, and when the old will cry. When the refugees return, and when Zionism will die.

He has prior connections to theÂ Islamic Association for PalestineÂ [8] and theÂ American Muslims for JerusalemÂ [9], both tied together by theHoly Land FoundationÂ [10], an American fundraising arm for Hamas. (He was in town to promote a new “Children Crisis Fund” for Lebanon and the West Bank & Gaza. One guess as to whereÂ thatÂ money ends up.)

But what of his job with MAS? Well, for one thing, he was dispatched to Cleveland toÂ patch things upÂ [11] between a radical cleric convicted of naturalizatin fraud and his understandably nervous congregants. This sameÂ Imam’s later convictionÂ [12] of being Jerry Lewis to Islamic Jihad’s Suicide Kids doesn’t seem to have hurt Tayeh’s status any, which should tell you something right there. (It should also tell you something that after said conviction, it tookÂ 18 monthsÂ to start deportation proceedings. That’s a year and a half we hosted this bacillusÂ afterÂ we knew he had infected us. And they say we’re not serious. But I digress.)

Currently, MAS is planning a jihadÂ march on WashingtonÂ [13] on August 12. Take a look at the co-conspirators, and see if you notice a pattern.

Tayeh would probably say heÂ just wants non-Muslims to understand them betterÂ [14]. That’s ok, Mr. Tayeh. I think we understand you plenty well. At least, if we don’t write for theÂ Rocky.

One thought on “Muhammedan propaganda (da'awa) rocks the U.S. and Austria”