LAHORE, Pakistan — With the U.S. pressing Pakistan to act against Islamic militants suspected in last week’s bloody assault on Mumbai, U.S. Secretary of State Condoleezza Rice said on Thursday that Pakistan’s president has assured her that his government will go after anyone connected to the attacks.

*Â Let’s Give Pakistan the Attention It Deserves

*Â Pakistan refuses to hand over suspects to India

But with Islamabad expressing deep skepticism that any Pakistani group was involved in the attack, South Asia’s crisis appeared to be entering a dangerous new phase, with pressure mounting on India’s leaders to take some form of action against their country’s longtime foe. 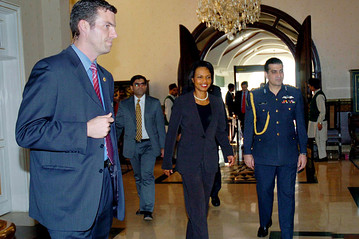 After her meetings with Pakistan President Asif Ali Zardari and other senior officials, Ms. Rice told reporters in Islamabad that she had “found a Pakistani government that is focused on the threat and understands its responsibilities to respond to terrorism and extremism.”

Pakistan: “Nuclear missiles can be fired within minutes in case of war”

A bit of saber-rattling from a Pakistani official/nuclear scientist who “urged political leaders not to be flexible in the face ofÂ India’s allegations.” Also, as he boasts of Pakistan’s nuclear status, one is reminded why it is that many jihadists are keen on usurping that government. If and when that happens, how will the world deal with a nuclear-armed jihadist state, one that — as jihadists areÂ constantly remindingÂ — “loves death the way you [infidels] love life”? If dhimmified infidels are making concessionsÂ now, just wait till when a nuclear-armed jihadist state, be it Iran, Pakistan, or another up-and-comer, starts making demands.

“Nuclear missiles can be fired within minutes in case of war,” from theÂ Daily Times,Â

The U.S. is walking a delicate line between two nuclear-armed rivals. Ms. Rice visited New Delhi a day earlier, saying she expected Pakistan to cooperate with the investigation into the attacks on a pair of hotels, a Jewish center, a train station and other targets in which 171 people were killed. At the same time, she made it clear that the U.S. expects restraint from India, which has pointedly refused to rule out military action.

Mr. Zardari told Ms. Rice his government “will not only assist in [the] investigation but also take strong action against any Pakistani elements found involved in the attack,” according to a statement by his office. Pakistan is “determined to ensure that its territory is not used for any act of terrorism,” the statement said.

Mr. Zardari has pledged to fully cooperate with India, with which Pakistan has been holding peace talks since 2004. “We are looking at this as an opportunity and I intend to do everything in my power,” Mr. Zardari said.

But his civilian government, Pakistan’s first in nearly a decade, is only 10 months old, and there’s widespread doubt about how much power he has over the two institutions needed to crack down on militants: the military and the powerful Inter-Services Intelligence agency, which many believe has at least some ties to the group blamed for the Mumbai attack, Lashkar-e-Taiba.

Indeed, the social and charitable organization that many analysts and security officials contend is the parent group of Lashkar-e-Taiba invited reporters to its headquarters not far from Lahore, the main city in Punjab province. The move appeared designed to show that the center isn’t linked to any militant activity, following rumors that it may be a possible target for any Indian retaliatory action.

Officials of Jamaat-ud-Dawa — which roughly translates as Party of Preachers — deny any link with Lashkar-e-Taiba or to terrorism.

“You can see what we do here,” Abdullah Muntazir, a young spokesman for Jamaat-ud-Dawa, told a group of journalists at a 75-acre complex that houses a university, two schools and a hospital. Young students learn science and math in well-equipped classrooms.

Pakistan put Jamaat-ud-Dawa on a list of terrorist organizations in 2003 after the U.S. placed it on its terror watch list. But Pakistan has never affected its activities.

Jamaat-ud-Dawa’s posters along the road to Lahore exhort Muslims to join jihad. The group publishes several magazines and runs a Web site, which contains reports of “Indian atrocities.” Analysts and security officials say it continues to recruit fighters for Lashkar-e-Taiba, which is still operating in Kashmir, the disputed border region between Pakistan and India. Last month Jamaat held a series of jihad rallies across the country that attracted hundreds of thousands.

Mr. Muntazir contended that the attacks in Mumbai might have been carried out by “those victimized by Hindus. “They are killing Muslims, Christians and other religious minorities,” he said. “It could be the reaction to that.”

Hafiz Mohammed Saeed, whose extradition has been sought by the Indian authorities in connection with the Mumbai attacks, established the complex in 1994 for Islamic preaching. He has denied any involvement in the Mumbai attacks.

Indian, U.S. and other Western officials say the evidence of a link to Lashkar, which has been accused of repeated attacks on Indian soil, comes from the confession of the sole terrorist captured last week — the other nine were killed — and a combination of communications intercepts and human intelligence.

Mumbai Joint Police Commissioner Rakesh Maria told a news conference in Mumbai Thursday that the suspect, Mohammed Ajmal Kasab, has said he initially approached Lashkar-e-Taiba recruiters because he was looking for weapons to use in petty crime. Mr. Kasab trained with a larger group at three or four different camps run by the group, Mr. Maria said. He was promised that his family would receive money if he died. Mr. Maria said Mumbai police have proof linking the terrorist attack last week to Lashkar-e-Taiba. Pakistani authorities were complicit in the attacks because they knew of the training camps, he said. “Obviously when camps are training people in using Kalashnikovs and firing AK-47s, local authorities are bound to know what’s going on,” he said.

Mr. Maria also said police believe another Lashkar-e-Taiba trainer, Zaki-ur-Rehman Lakhvi, also may have been involved in directing the attacks. And he said there was some evidence that the people killed at one of the targets — a Jewish center in southern Mumbai — were tortured before they were killed by strangulation.

Islamabad’s insistence that it doesn’t believe the attackers came from Pakistan worries Western policy makers, who fear a repeat of what happened after Islamic militants attacked India’s Parliament in 2001, killing 15 people. Lashkar was among the groups blamed for that attack and India and Pakistan had to be talked back from the brink of their fourth war since independence from Britain in 1947.

A Western diplomat in New Delhi said the perception in the diplomatic community was that the situation between the two nations was deteriorating, as India faces immense public pressure to respond to the attacks in the face of Pakistan’s refusal to hand over people India wants.

“My sense a couple of days ago was that if Pakistan could make some sort of real gesture, we might be able to get some progress,” the diplomat said. “I thought the odds were against some form of intervention from the Indian side; I’m less sure now. There’s got to be some gesture; if there isn’t, something’s going to happen.”

Full-blown war still seems unlikely — a conflict would wreck India’s economy and undermine Pakistan’s struggle against Taliban and al Qaeda fighters dug in on its border with Afghanistan — but there’s increasing speculation that India could try to launch some kind of limited strike against Lashkar camps in Pakistan or other militant targets.

How Pakistan would react in that scenario is unknown. But Taliban warlords have volunteered to stop fighting Pakistani soldiers and instead join them on the front line if there were a conflict with India.

Regardless, India’s political elite, who next year will be facing voters angered by the government’s inability to stop terror attacks, are under tremendous pressure.

“I think there is a sense that something has to be done. We have heard Pakistan promise to crackdown on militants before,” said a senior Indian official and member of the Congress party, which leads India’s governing coalition.

In a reflection of how on edge India remained, airports were put on high alert after authorities received a warning of a possible attack on airports in New Delhi, Bangalore and Chennai.

â€”Geeta Anand contributed to this article.