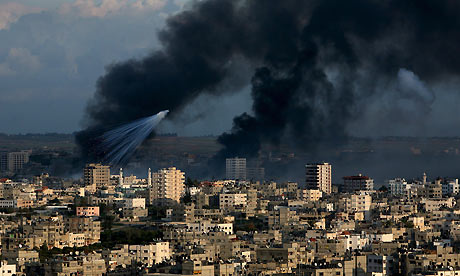 He said: “There is a real feeling of helplessness, hopelessness and powerlessness among Britain’s Muslims in the context of Gaza and the sense of grievance and injustice is both profoundly acute and obviously profoundly unhealthy.”

The comments by Malik, the first Muslim to be made a minister in any British government, were echoed by the Conservative shadow security minister, Pauline Neville-Jones, who said she was concerned at the effect the conflict was having on radicalism in the wider Arab world. David Miliband, the foreign secretary, is to make a statement to the Commons on Gaza later today.

Speaking to the Guardian, Malik expressed alarm that the vast majority of British Muslims were drawing no distinction between current UK government policy and that held by Tony Blair when he failed to condemn immediately an invasion of Lebanon by Israel in 2006.

In August 2006 Malik became the most senior Muslim to criticise Blair in an open letter. Though he was then outside government as a parliamentary private secretary (PPS), etiquette restricts a PPS from criticising government policy.

Describing meetings he had held with Muslim communities in the past few days, Malik said: “I was extremely concerned that many British Muslims had failed to distinguish between the UK’s current response and the response in 2006 during the Lebanon crisis. People have become so disillusioned that they almost appear to have stopped listening to politicians.”

Malik said he had to explain to constituents the government’s position. He said: “The prime minister and foreign secretary have talked about the violence being horrific, appalling, unacceptable and disproportionate â€“ words not usually used in these situations by UK governments. [At meetings] many were shocked that the government believes that there should be a viable Palestinian state based on pre-1967 borders alongside a secure Israel or that we object strongly to settlement expansion and Israel’s security wall, which contravenes international law.”

Khalid Mahmood, a Muslim and MP for Birmingham Perry Barr, also expressed support for the government’s stance so far but thought it could use stronger language. He said: “The government needs to issue stronger lines in showing it is not happy, and that we as a nation are not happy, with what is going on in Gaza.” Mahmood dismissed suggestions of an arms embargo.

Pola Uddin, a Labour peer, said that some Muslims had been hitherto disappointed in the profile of Muslim parliamentarians. Uddin, who had been abroad monitoring elections in Bangladesh, said: “I got back to a sackful of letters from people asking why we are all silent. One said, ‘I know why you’re silent â€“ it’s because you can’t do anything.'”