SINCE IT came into office a month ago, every single Middle East policy the Obama administration has announced has been antithetical to Israel’s national security interests. From President Barack Obama’s intense desire to appease Iran’s mullahs in open discussions; to his stated commitment to establish a Palestinian state as quickly as possible despite the Palestinians’ open rejection of Israel’s right to exist and support for terrorism; to his expressed support for the so-called Saudi peace plan, which would require Israel to commit national suicide by contracting to within indefensible borders and accepting millions of hostile, foreign-born Arabs as citizens and residents of the rump Jewish state; to his decision to end US sanctions against Syria and return the US ambassador to Damascus; to his plan to withdraw US forces from Iraq and so give Iran an arc of uninterrupted control extending from Iran to Lebanon, every single concrete policy Obama has enunciated harms Israel.

At the same time, none of the policies that Obama has adopted can be construed as directed against Israel. In and of themselves, none can be viewed as expressing specific hostility toward Israel. Rather, they are expressions of naivetÃ©, or ignorance, or – at worst – deliberate denial of the nature of the problems of the Arab and Islamic world on the part of Obama and his advisers.

The same cannot be said of the administration’s decision to send its delegation to the Durban II planning session this past week in Geneva. Unlike every other Obama policy, this is a hostile act against Israel. This is true first of all because the decision was announced in the face of repeated Israeli requests that the US join Israel and Canada in boycotting the Durban II conference.

Some could chalk up the US’s rejection of Israel’s urgent entreaties as an honest difference of opinion. But what lies behind Israel’s requests for a US boycott is not a partisan agenda, but a clearheaded acknowledgement that the Durban II conference is inherently devoted to the delegitimization and destruction of the Jewish state. And by joining in the planning sessions, the US has become a full participant in legitimizing and so advancing this overtly anti-Jewish agenda.

On Thursday, Prof. Anne Bayefsky, the senior editor of the EyeontheUN Web site, demonstrated that by participating in the planning sessionsÂ the US is acceptingÂ the conference’s anti-Israel agenda. Bayefsky reported that at the planning session in Geneva on Thursday, the Palestinian delegation proposed that a paragraph be added to the conference’s agenda. Their draft “calls for implementation of… the advisory opinion of the ICJ [International Court of Justice] on the wall, [i.e., Israel’s security fence], and the international protection of Palestinian people throughout the occupied Palestinian territory.”

The American delegation raised no objection to the Palestinian draft.

Issued in 2004, the ICJ’s advisory opinion on the security fence claimed that Israel has no right to self-defense against Palestinian terrorism. At the time, both the US and Israel rejected the ICJ’s authority to issue an opinion on the subject.

On Thursday, by not objecting to this Palestinian draft, not only did the US effectively accept the ICJ’s authority, for practical purposes it granted the anti-Israel claim that Jews may be murdered with impunity.

This assertion aligns naturally with the language already in the Durban II agenda, which calls Israel’s Law of Return racist. This law, which grants automatic citizenship to any Jew who wishes to live here, is the embodiment of Jewish peoplehood and the vehicle through which the Jewish people has built our nation-state. In alleging that the Law of Return is racist, the Durban II conference asserts that the Jews are not a people and we have no right to self-determination in our homeland. And Thursday, by participating in the process of demonizing Israel and its people, the US lent its own credibility to this bigoted campaign.

That’s what I had planned to blog tonight immediately after the Sabbath, and you shouldÂ read the whole thingÂ (in fact, I had Bayefsky’s article, linked above, open all week, and never got to blogging it). 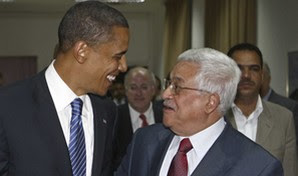 “The new administration hasÂ a different policy than that of [former US President] George W. Bush,” the official told The Jerusalem Post. “The administration of President Barack Obama believes that a Hamas-Fatah government isgood for stability.”

The Egyptians have issued invitations to representatives of Hamas, Fatah and several other Palestinian groups to attend reconciliation talks that are due to begin in Cairo on February 25.

Fatah and Hamas officials confirmed that the Egyptians had invited them to the talks.

PA President Mahmoud Abbas, who visited Cairo last week, reportedly told Mubarak that he’s prepared to patch up his differences with Hamas. Abbas, according one of his aides, urged the Egyptian president to set a new date for convening the Palestinian “national reconciliation” talks in Cairo.

At the talks, Hamas and Fatah are expected to form five joint committees to discuss ways of resolving their differences over a variety of issues such as control over the border crossings into the Gaza Strip, reconstructing the PA security forces and forming a new unity government.

Ahead of the planned parley, Hamas and Fatah representatives met in Cairo and Ramallah over the past two weeks in an attempt to reach agreement on the agenda of the talks.

Fatah legislator Azam al-Ahmed, who has been participating in the talks with Hamas, said that the results of the last Israeli general elections, which saw the rise of right-wing parties, required the Palestinians to unite “in the face of the new challenges.” He also expressed optimism regarding the prospects of ending the Hamas-Fatah power struggle.

Another Fatah operative, Ibrahim Abu al-Naja, saidÂ the fact that Likud chairman Binyamin Netanyahu has been tasked with forming a new government “proves that the Israeli public opinion favors war and destruction.”

He said that in the wake of the “dangerous developments in Israel, the Palestinians must unite their ranks by forming a unity government.”

I hope that all of you who think you support Israel who voted for this moron to be President of the United States are at least having trouble sleeping at night. There is very little that could be more hostile to Israel than four years of a pro-Hamas administration in Washington.

Britain and Italy threaten to drop out of Durban II

Britain and Italy could join Canada and Israel in refusing to attend the Durban II Review Conference in April unless they receive cast-iron guarantees that it will not turn into an antisemitic, anti-Israel arena of hate.

The conference, to be held in Geneva, is a follow-up to the UN World Conference against Racism, Racial Discrimination, Xenophobia, and Related Intolerance held in Durban, South Africa, in 2001.

The Durban conference became notorious for its unbridled attacks on Israel, led by Iran and a number of other Arab states.

This time, a number of countries are awaiting a final decision by America â€” which has agreed to send a delegation to Geneva for an organisational meeting in the next few days â€” before they clarify their position. Jewish NGOs held an informal meeting on Sunday before the start of the conference to agree their strategy.

Britain’s Foreign Office Minister Lord Malloch-Brown said on Tuesday: “If we can’t go forward now, we will withdraw. I was at the first conference. I have never seen such a disgraceful event in quite a long international life.”

At a dinner for delegates on Monday night, Italian Foreign Minister Franco Frattini said: “We will not send an Italian delegation [if it is the same as Durban 2001], but we will try to harmonise our position with other countries who are the friends of Jews. But we will leave a decision until the last minute.”

Jon Benjamin, chief executive of the Board of Deputies, said: “Lord Malloch-Brown’s comment that we are now in the make or break final phase in which to keep Durban II on track reflects our view that a serious and meaningful engagement with the issue of human rights is worth fighting for, but not at any price and not if the process is corrupted by those with no other agenda than to attack Israel and the Jewish people.”