How much longer will Jews stay in Venezuela?

* Back to the 1930’s in Venezuela, from Carl in Jerusalem 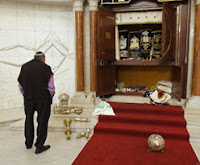 A Caracas synagogue wasÂ vandalizedÂ on Friday night with Sifrei Torah (Torah scrolls) damaged and slogans calling for Jews to leave painted on the synagogue’s walls. The slogans were not against Israel, but against Jews.

Earlier this week, Israel expelled all Venezuelan diplomats from the country in response to Venezuela expelling all Israeli diplomats last week.

This is from aÂ Simon Wiesenthal CenterÂ release from Thursday, less than 24 hours before the synagogue was vandalized (Hat Tip:Â Gudrun E.).

“There is a well-orchestrated campaign on TV, radio, print and Internet media owned by the government, openly questioning Israelis right to exist, even including publication of such anti-Semitic materials as The Protocols of the Elders of Zion. A group of pro-government journalists is urging the population to boycott of businesses owned by Jews in Venezuela,” they added.

Most frightening was a ‘plan of action’ published in a pro-government digital newspaper, Aporrea.org, giving direction against Venezuela’s Jewish community which included:

– publicly denouncing by name, the members of powerful Jewish groups in Venezuela, names of their companies and businesses in order to boycott them

– avoiding products, stores, supermarkets, restaurants, and where Kosher food is sold which either belongs or has links with ‘Zionist Jews’

– nationalization of companies, confiscation of properties of those Jews who support the Zionist atrocities of the Nazi-State of Israel, and donate this property to the Palestinian victims of today’s Holocaust

– sending all type of aid to Palestinians including weapons

– organizing an international conference about the creation of the theocratic – Nazi state of Israel as a genocidal European colony, and about the myths and facts of the alleged Jewish Holocaust or Holohoax (a blackmailing industry)

– support the dissolution of the artificial State of Israel

An armed group vandalized Caracas’ oldest synagogue, shattering religious objects and spray-painting walls in what Jewish leaders called the worst attack ever on their community in Venezuela.

Two security guards were overpowered by about 15 people who ransacked the
synagogue’s sanctuary and offices late Friday, leaving graffiti such as: We don’t want murderers, and Jews, get out.

Venezuelan Foreign Minister Nicolas Maduro condemned the attack and promised it would be investigated, while reiterating his government’s opposition to what he called Israel’s criminal government.

“We respect the Jewish people, but we ask respect for the people of Palestine and their right to life,” Maduro said in a ceremony called to welcome home two Venezuelan diplomats expelled from Israel this week.

At least those Jews have a place to go. Imagine if Chavez got his way and there was no Israel….