Chas Freeman showed on his departure from the National Intelligence Council on Tuesday night that he just doesn’t understand why he’s not fit to be the Council’s chair. Then again, maybe he does understand and was just looking for a scapegoat. He found a convenient and familiar one: The Jews

Thanks to Pamela andÂ Â Yid with lid

Freeman has been under fire for quite some time, thoughÂ the White House has had little to say on the matter.

Today at a Senate hearing, Blair faced questions about the perception that Freeman is anti-Israel and pro-Saudi Arabia and pro-China, as critics have alleged.Â Blair said Freeman was being taken out of context.

So what do Chinese democracy activists have against Mr. Freeman, a former U.S. ambassador to Saudi Arabia? As it turns out, they are all, apparently, part-and-parcel of the Israel Lobby. 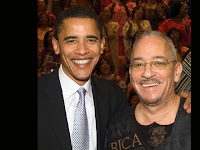 A year ago, Barack Obama was running for president and people were starting to pay attention to his “spiritual mentor,” Jeremiah Wright. Obama tried to have it every way: He claimed he had no idea about Wright’s crackpot ravings, which of course he did not agree with, but he proclaimed his personal loyalty to a man he portrayed as merely eccentric and avuncular. Months later, when this approach was no longer political tenable, Obama threw Wright under the bus, as the vivid campaign metaphor had it.

The pattern has repeated itself, and because Obama is president, now his choice of associates really matter. Charles Freeman, described by our colleagueÂ Bret Stephens as “Obama’s national intelligence crackpot,” met the bus’s underside yesterday, withdrawing from consideration to be chairman of the National Intelligence Council.

There’s a broader pattern at work here. Obama does a very poor job of choosing the people with whom he associates. This was seen in several of his campaign advisers. For example, Samantha Powers, who was forced to resign after calling Hillary Clinton a ‘monster,’ but who has since been rehired, and Robert Malley who was forced to resign after admitting to having met with Hamas, who has since remained in the background. And it’s also been seen in some of his cabinet appointments. Bill Richardson, Tom Daschle and Nancy Killefer, all of whom had tax issues of some sort that forced them to withdraw from the nominating process, all come to mind.

What’s not clear yet is whether Obama is a poor judge of character, whether he’s just too lazy to vet thoroughly or whether the things that bother the rest of us about these people don’t bother him. Which of the three is the cause of the Chas Freeman fiasco is something that should interest all of Israel’s supporters.

Chas Freeman: His wit and wisdom

Last weekendÂ Martin Kramer compiled the statements of Saudi/Manchurian candidate Chas Freeman on al Qaeda and 9/11. Freeman is of course the former American ambassador to Saudi Arabia whom Obama administration DNI Dennis Blair appointed to chair the National Intelligence Council. In the spirit of Kramer’s compilation, I thought it might be useful to collect in one place a few of the highlights of Freeman’s keen analytical insight expressed over the years, grouped by subject with links to the sources.

I find the dominant view in China about this very plausible, i.e. that the truly unforgivable mistake of the Chinese authorities was the failure to intervene on a timely basis to nip the demonstrations in the bud, rather than — as would have been both wise and efficacious — to intervene with force when all other measures had failed to restore domestic tranquility to Beijing and other major urban centers in China. In this optic, the Politburo’s response to the mob scene at “Tian’anmen” stands as a monument to overly cautious behavior on the part of the leadership, not as an example of rash action.

For myself, I side on this — if not on numerous other issues — with Gen. Douglas MacArthur. I do not believe it is acceptable for any country to allow the heart of its national capital to be occupied by dissidents intent on disrupting the normal functions of government, however appealing to foreigners their propaganda may be. Such folk, whether they represent a veterans’ “Bonus Army” or a “student uprising” on behalf of “the goddess of democracy” should expect to be displaced with despatch from the ground they occupy. I cannot conceive of any American government behaving with the ill-conceived restraint that the Zhao Ziyang administration did in China, allowing students to occupy zones that are the equivalent of the Washington National Mall and Times Square, combined. while shutting down much of the Chinese government’s normal operations. I thus share the hope of the majority in China that no Chinese government will repeat the mistakes of Zhao Ziyang’s dilatory tactics of appeasement in dealing with domestic protesters in China.

I simply want to register what I think is an obvious point:; namely that what 9/11 showed is that if we bomb people, they bomb back.

Americans need to be clear about the consequences of continuing our current counterproductive approaches to security in the Middle East. We have paid heavily and often in treasure in the past for our unflinching support and unstinting subsidies of Israel’s approach to managing its relations with the Arabs. Five years ago we began to pay with the blood of our citizens here at home. We are now paying with the lives of our soldiers, sailors, airmen, and marines on battlefields in several regions of the realm of Islam, with more said by our government’s neoconservative mentors to be in prospect.

Freeman on the Arab-Israeli conflict (October 2006):

Demonstrably, Israel excels at war; sadly, it has shown no talent for peace.

Freeman on Israeli intransigence (May 2007):

Israel no longer even pretends to seek peace with the Palestinians; it strives instead to pacify them.

American identification with Israeli policy has also become total. Those in the region and beyond it who detest Israeli behavior, which is to say almost everyone, now naturally extend their loathing to Americans. This has had the effect of universalizing anti-Americanism, legitimizing radical Islamism, and gaining Iran a foothold among Sunni as well as Shiite Arabs. For its part, Israel no longer even pretends to seek peace with the Palestinians; it strives instead to pacify them. Palestinian retaliation against this policy is as likely to be directed against Israel’s American backers as against Israel itself. Under the circumstances, such retaliation – whatever form it takes – will have the support or at least the sympathy of most people in the region and many outside it. This makes the long-term escalation of terrorism against the United States a certainty, not a matter of conjecture.

Freeman on the role of American Jews (October 2006):

[H]istory and the Israeli response to date both strongly suggest that without some tough love from Americans, including especially Israel’s American coreligionists, Israel will not risk the uncertainties of peace.

Freeman on the withdrawal of his appointment (March 2009):

The libels on me and their easily traceable email trails show conclusively that there is a powerful lobby determined to prevent any view other than its own from being aired, still less to factor in American understanding of trends and events in the Middle East. The tactics of the Israel Lobby plumb the depths of dishonor and indecency and include character assassination, selective misquotation, the willful distortion of the record, the fabrication of falsehoods, and an utter disregard for the truth. The aim of this Lobby is control of the policy process through the exercise of a veto over the appointment of people who dispute the wisdom of its views, the substitution of political correctness for analysis, and the exclusion of any and all options for decision by Americans and our government other than those that it favors….

I regret that my willingness to serve the new administration has ended by casting doubt on its ability to consider, let alone decide what policies might best serve the interests of the United States rather than those of a Lobby intent on enforcing the will and interests of a foreign government.

Freeman on his one regret regarding his withdrawal statement (March 2009):

The only thing I regret is that in my statement I embraced the term “Israel lobby.” This isn’t really a lobby by, for or about Israel. It’s really, well, I’ve decided I’m going to call it from now on the [Avigdor] Lieberman lobby. It’s the very right-wing Likud in Israel and its fanatic supporters here. And Avigdor Lieberman is really the guy that they really agree with. And I think they’re doing Israel in.