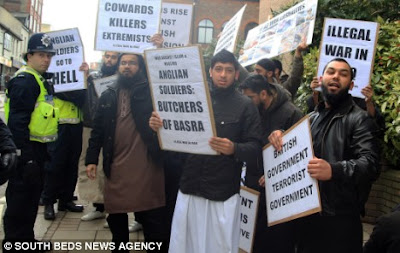 He said: ‘On 10th March 2009, 200 pathetic and cowardly British soldiers from the second battalion, of the Royal Anglian Regiment, pompously marched through Luton to demonstrate their skill at murdering and torturing thousands of innocent Muslim men, women and children [in Iraq] over a 24-month period.’

Choudary leads the controversial Islam For The UK organisation which wants Britain to be an Islamic state, ruled by Sharia law. Well-wishers waved Union flags as they cheered the soldiers on

His group was formed after Bakri’s fundamentalist organisation Al-Muhajiroun was banned by the Government.

He said: ‘Non-Muslims in Britain must appreciate that the actions of the British soldiers must be condemned unreservedly; they are not heroes but closer to cowards who cannot fight, as their uncanny knack for death by “friendly fire” illustrates.’

His cruel comments were clearly designed to mock the memory of Private Darren George, 23, from Pirbright, Surrey, who was accidentally shot by a colleague in Kabul on April 9, 2002. Today it was revealed that yesterday’s shocking scenes were likely to have been organised by an extremist group directly linked to Bakri Mohammed.

Within hours of the march ending, the London School of Sharia had posted a message in support on its website.Â

The group is led by Bakri, the ‘Tottenham Ayotollah’, who now preaches to his followers from Lebanon via videos posted on websites after he was barred from Britain.

Bakri, 51, today said he felt ‘proud’ of the Luton protesters but denied any involvement in organising the demonstration.

TheÂ  preacher, speaking from Lebanon, said: ‘My brothers from Luton were protesting against people they see as killers of Muslims in Iraq – including women and children’

But one Muslim community leader today condemned the extremists.

Akbar Dad Khan, of Building Bridges in the town, said: ‘They are about 10 to 15 hot heads. The best thing to do is just to ignore them. They do not represent the views of the community. They are a small hotch-potch of hot heads.

‘They love the attention and the media should not give them the time of day. The vast majority of the Muslim population in Luton – like elsewhere – want to live peacefully and get on with their lives.’ Returning heroes: Members of the 2nd Battalion Royal Anglian Regiment parading through Luton yesterday after their tour of duty in Iraq

‘Many people from all backgrounds opposed the Iraq war but there are proper ways to conduct yourself,’ he added.

One protester at yesterday’s rally, Sayful Islam, the leader of the Luton branch of an organisation that has the same beliefs as al-Muhajiroun, was unrepentant today.

He said: ‘The anger has been rising. The parade was the final insult. They have killed, maimed and raped thousands of innocent people. They can’t come here and parade where there is such a Muslim community.’

Last month members of the same group were seen at an anti-Israel demonstration in the Bedfordshire town.Â

In his internet posting, Anjem Choudary said that the British soldiers were ‘terrorists’.

He said: ‘They cannot be excused for simply “carrying out their duty”, which incidentally [and vividly] was also used by Nazi soldiers in Germany to justify their notorious and bloody campaigns in the early 20th century.’ Sickening: The protesters had printed out placards branding the soldiers ‘cowards’ and ‘killers’ Police were already out in force to protect the anti-war group and arrested two men among the soldiers’ supporters.

Last night the mother of David Hicks, a captain with the Royal Anglian Regiment who was killed in Afghanistan in August 2007, called the protests ‘extremely distressing’.

‘I felt very saddened and extremely upset,’ said Mrs Hicks, of Wokingham, Berkshire. ‘I also feel a little angry. I think every mother or father who has lost somebody in Afghanistan or Iraq would feel very difficult about this.

‘It’s very easy to tarnish all the Muslim community with the same brush, but I do wonder, if the roles were reversed, if such a protest would be allowed in a Muslim country.’

Gordon Brown condemned the protests and ministers and senior politicians branded the demonstration ‘insulting’ and ‘sordid’.

Shadow Secretary of State for Defence Dr Liam Fox said: ‘This is offensive, appalling and disgraceful.Â ‘It is only because of the sacrifices made by our armed forces that these people live in a free society where they are able to make their sordid protests.’

She said: ‘Calling people baby-killers and the rest seems to amount to provocation of the worst kind when these lads and lasses have risked their lives for the freedom these people enjoy. It seems to me this amounted to huge provocation and was potentially racially divisive.’

But the Muslim protesters were unrepentant. Sayful Islam said: ‘The anger has been rising. The parade was the final insult.

‘They have killed, maimed and raped thousands of innocent people. They can’t come here and parade where there is such a Muslim community. What do they have to be proud of?’ Counter attack: A placard spells out backing for our troops

The battalion is based in Germany, but Bedfordshire is one of the areas where it recruits, along with neighbouring Hertfordshire and Northamptonshire.

Trouble flared as the soldiers marched to a meeting with the Duke of Gloucester, the regiment’s colonel-in-chief, and local dignitaries.

Leaflets urging Muslims to demonstrate against the soldiers’ homecoming had been distributed around Luton earlier in the week.

Under the headline ‘Criminals’, it railed against the troops’ ‘audacity’ at marching though the town centre and accused them of having ‘blood on their hands’. It read ‘Muhammad said :”He among you who sees a munkar (evil) should change it with his hand. If he can not do that , then with his tongue(by speaking out against it)”.’

It finished with the words:’ We urge the Muslims of Luton not to stay silent against these murderers of Muslim men, women and children and to do what we as Muslims have been obliged to do and speak against an open evil.’

Police had penned the protesters into a small area and two lines of officers separated them from a large number of local people, waving Union and St George’s flags. At one point a man climbed onto a roof and threw a packet of bacon at the Muslim group.

Bedfordshire police said the Muslim protesters were later ‘escorted from the area to a safe place to disperse’.

The force said last night: ‘Everything that went on will be examined and if any offences have been committed then we will arrest them.’

An Army spokesman said the battalion, which is due to take part in a similar march in Watford today, was ‘deeply touched’ by the strong support shown by the people of Luton.

He said: ‘There is no better boost to a soldier than to see hundreds of people turn out to watch them on parade.’

The Royal Anglian Regiment has lost ten soldiers during the Afghan conflict and two during the Iraq conflict.

Those killed in Afghanistan are:Â Those killed in Iraq are:Â