Gates of Vienna/ by Baron Bodissey

Â Recently a group of English patriots applied for a permit to organize a parade in Luton on April 23rd â€” St. George’s Day, English National Day â€” but their application was denied, ostensibly because they had failed to file far enough in advance. This refusal resulted in an unofficial outpouring of anger as shown inthe videoÂ I posted last night. 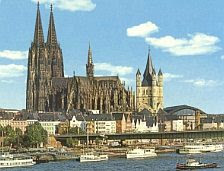 A similar repression is at work in Cologne. As you may remember, thePro-KÃ¶ln movementÂ will hold an Anti-Islamization Congress for May 9th, and it was originally scheduled to take place in the square in front of Cologne Cathedral.

This location is significant â€” the cathedral is the heart of the city, and the true symbol of its traditional Christian culture, which is what Pro-KÃ¶ln is intent on defending against the Muslim encroachment as represented by the proposed mega-mosque in Cologne-Ehrenfeld.

This is just the latest of many examples of the suppression of free speech â€” others include the self-imposed censorship of any publication of the Motoons, and the ban against Geert Wilders’ appearance in the UK â€” because of a fear of violence on the part of those who disagree with what other citizens have to say.

The organizers of the Anti-Islamization Congress, however, are ready with alternate plans. Our Flemish correspondent VH has compiled an account of the latest from Cologne, based on various German-language sources:

Many new developments in Cologne!

2 thoughts on “Anti-Islamization Congress in Cologne: Pro-KÃ¶ln not allowed to assemble in front of cathedral”