It will be forever ignored or denied by those who insist that Islam is a Religion of Peace, but in reality there is no Misunderstanding of Islam going on here. Every provision of this law as stated in this article, including the rule that women cannot refuse sex to their husbands at any time or for any reason, is part of traditional Islamic law. And so this new law is yet another indication of how theÂ overtures to the Taliban from official Washington are out of focus. Will the U.S. stand up for these women and defend them? Absolutely not, because they are being victimized by Sharia, to which Washington has no apparent objection, and because they are not being blown up in terrorist attacks. The passing of a law in a non-violent manner — what’s the problem? It’s democracy at work!

If this stands, it will make it impossible for the U.S. to wage war. Soldiers will be afraid to take prisoners for fear of being tied up in lawsuits — and given the experience with Litigation Jihad that American Muslim advocacy groups have been honing for years, we can expect to see a great deal of this. “Judge: Afghan prisoners can challenge detention,” fromÂ AP, via JW

America heard much about the “enlightenment” of Hamid Zarzai, the poetic leader of Afghanistan, especially regarding the realm of women’s rights, which, while under the Taliban, were nonexistent. Of course it was all nonsense, especially after Karzai refused to publicly denounce the incarceration of a Muslim man who had converted to Christianity and who faced the possibility of execution:

“Pakistan has, over past several decades, been using terrorists as a strategic tool against India”

Friend and Ally Update: a Congressional panel hears the truth about Pakistan’s involvement in the jihad against India. “‘Pak using terrorists as strategic tool against India,'” fromÂ ExpressIndia

* OBL surrogate: “Soon we will launch an attack in Washington that will amaze everyone in the world”

Just in case you already had some doubts about Karzai’s enlightenment, here is where heÂ enthusiasticallyÂ applauded Malaysian nutter Mahatir Mohammed for his tirade against Jews and called for “final victory”

“1.3 billion Muslims cannot be defeated by a few million Jews” 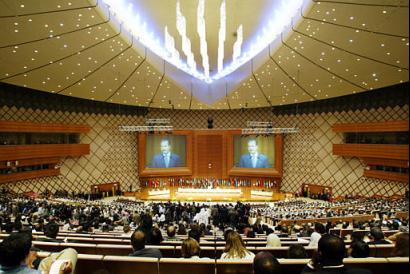 Malaysian Prime Minister Mahathir Mohamad, pictured on a video screen, addresses the Organization of the Islamic Conference (OIC) during of the opening of the two day Summit Thursday Oct. 16, 2003 in Putrajaya. (AP Photo/Ed Wray)

PUTRAJAYA, Malaysia – Malaysian Prime Minister Mahathir Mohamad on Thursday told a summit of Islamic leaders that “Jews rule the world by proxy” and the world’s 1.3 billion Muslims should unite, using nonviolent means for a “final victory.”Â

Mahathir, who is known for his outspoken, anti-Western rhetoric, criticized what he described as Jewish domination of the world and Muslim nations’ inability to adequately respond to it as he opened the meeting of Islamic leaders from 57 nations.Â

Here are some excerpts; I’m not certain of the order in which they were spoken. -Yael

“We are actually very strong. 1.3 billion people cannot be simply wiped out. The Europeans killed 6 million Jews out of 12 million, but today the Jews rule the world by proxy,” Mahathir said. “They get others to fight and die for them.”Â

“We are up against a people who think. They survived 2000 years of pogroms not by hitting back but by thinking. They invented Socialism, Communism, human rights and democracy so that persecuting them would appear to be wrong, so that they can enjoy equal rights with others. With these they have now gained control of the most powerful countries and they, this tiny community, have become a world power.”Â

“Today we, the whole Muslim ummah (community) is treated with contempt and dishonor. Our religion is denigrated. Our holy places desecrated. Our countries are occupied. Our people starved and killed.”Â

“We need guns and rockets, bombs and warplanes, tanks and warships for our defense. But because we are discouraged from learning of science and mathematics as giving us no merit for the afterlife, today we have no capacity to produce our own weapons for our defense. We have to buy our weapons from our detractors and enemies.” 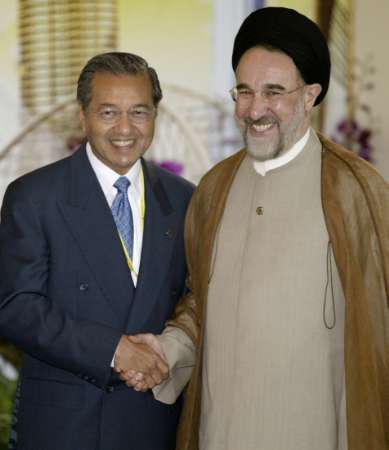 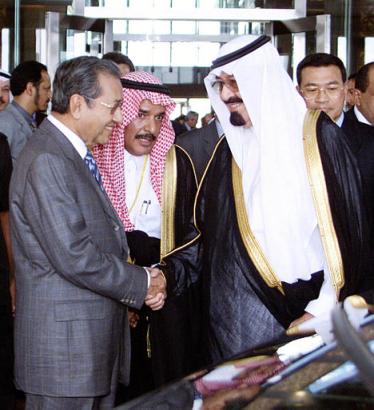 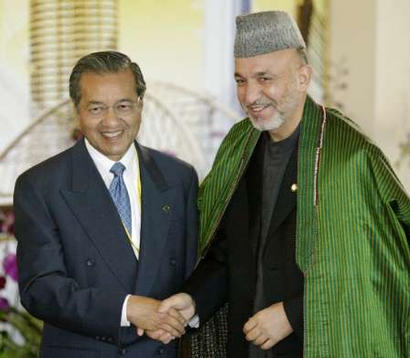 Afghan President Hamid KarzaiÂ said he supported Mahathir’s analysis, which also included steps for how Muslim nations can develop economically and socially. “It is great to hear Prime Minister Mahathir speak so eloquently on the problems of the ummah (Muslim world) and ways to remedy them,” Karzai said. “His speech was an eye-opener to a lot of us and that is what the Islamic world should do.”Â

Israeli Foreign MinistryÂ spokesman Jonathan Peled expressed disappointment in the remarks but said he wasn’t surprised. “It is not new that in such forums there is always an attempt to reach of the lowest common denominator which is Israel bashing,” he said in Jerusalem. “But obviously we’d like to see more moderate and responsible kind of declarations coming out of such summits.”Â

Rabbi Abraham Cooper, associate dean of theÂ Simon Wiesenthal CenterÂ in Los Angeles, said Mahathir has used anti-Israel statements in the past to prove he’s tough on the West. But, he said, Thursday’s speech was still worrisome. “What is profoundly shocking and worrying is the venue of the speech, the audience and coming in the time we’re living in,” Cooper said during a visit to Jerusalem. “Mahathir’s speech today is an absolute invitation for more hate crimes and terrorism against Jews. That’s serious.”Â

The ADLÂ today urged leaders of civilized nations to condemn the speech. Abraham Foxman: “This is nothing more than a call to Holy War against Jews. It is grotesque anti-Semitism on an international scale. Mahathir’s speech needs to be condemned by responsible leaders of the civilized world as an unacceptable outrage and an affront to civilized society.”Â

Malaysia’s national anthem was written in 1937 by a Jewish composer living in Malaya, J.A. Redhill, also known as Reutenberg, a refugee from Russia.Â

2 thoughts on “WTF are we fighting for? To establish the shari'a?”