Tampa: (Saudi)Muslim charged for trying to bring knife onto airplane

He’s got the radical beard, but where’s the coffee-filter?

He just wanted to butter his toast, you Islamophobe. “Man charged with trying to bring knife onto plane at TIA,” fromTampa Bay Online, JW

Read theÂ federal criminal complaint against Alsaif. According to private investigatorÂ Bill WarnerÂ (who has done a ton of digging into this guy), Alsaif is a Saudi Arabian national, here on a student visa–you know, one of those wonderfulÂ Saudi student visas that President Bush and Saudi King Abdullah doubled to 30,000, in the interest of “open exchange” and “understanding.”

* Bill reports that Alsaif has two previous instances on his criminal record. More>>>

I think we need more “interfaith dialogue”… We can’t fight hate with hate, we have to break that cycle of hate… we must help the Muslim world out of poverty… bahbahbah blah blah blah…

The Michigan Supreme Court ruled that judges have discretion regarding the appearance of witnesses and litigants in their courtrooms. That includes requiring a witness to remove her Muslim face veil, known as the “niqab.” (Read the press releaseÂ announcing the agenda for today’s Supreme Court administrative meeting and the language that was considered and approved.)

The controversy stems from aÂ 2006 small claims case I covered extensively on this site. Hamtramck Judge Paul Paruk required Muslim convert Ginnah Muhammad to remove her face veil, in order to testify in his courtroom. She refused. But judges must determine the veracity of witnesses, and it’s impossible to do so, when a witness is dressed in full ninja gear, with only tiny eye slits showing. Because Muhammad refused, Paruk dismissed her case. 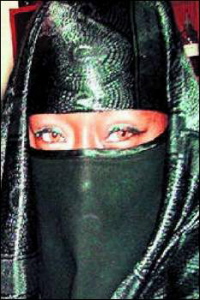 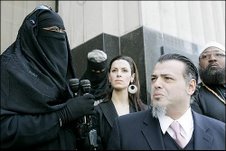 Ginnah Muhammad in herÂ Niqab, w/ Terrorist Lawyer Nabih AyadMuhammad sued Paruk in federal court, and as I noted on this site, she lost. Federal JudgeJohn S. Feikens, in a no nonsense ruling, held that her civil rights were not violated by Judge Paruk’s reasonable request that he be able to see her face when she testified. He dismissed her federal suit. Â More>>