Turkey tried Kemalism as a replacement doctrine against Islam. Kemal Ataturk declared that Â “Islam – the theology of an immoral Arab – is a dead thing. it might have suited tribes in the desert. It is no good for modern, progressive state.”

Now, after 70 years of Kemalism, the Islamist PM Tayyip Erdogan is winding back the clock and sides with Iran, Syria and other Arab states against Israel: 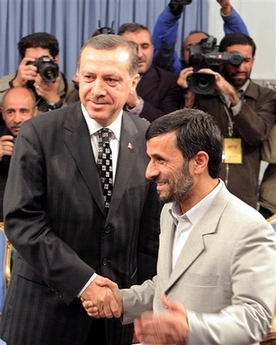 “Your clear stance against the Zionist regime (of Israel) produced positive effects in the world of Islam and the entire world, and no doubt this position of yours gladdened all nations,” Ahmadinejad said in a meeting with visiting Turkish prime minister.

“The reality is that the Zionist regime is a threat to all nations, and if it finds the chance, it will annex all regional states,” Ahmadinejad went on saying.

“It (Israel) does not want any other powerful state in the region,” he noted.

Prior to his visit to Tehran, the Turkish Prime Minister slashed at Israel in Ankara on Monday, saying that keeping silent about the use of weapons of mass destruction by Israel in Gaza will be unfair.

“Phosphorus bombs are weapons of mass destruction. Remaining silent over this would be unfair,” Erdogan said.

Relations between Israel and Turkey have soured since the Israeli war against Palestinians in Gaza last January.

Earlier this month, Turkey canceled a joint military exercise in which Israeli pilots were planned to participate.

Elsewhere, in the meeting with the Turkish premier, Ahmadinejad thanked Erdogan for his support for Iran’s peaceful nuclear program.

Commenting upon Tehran-Ankara relations, President Ahmadinejad said, “Cooperation between Iran and Turkey will serve the interests of the two nations, the region and the entire world.”