The deepest differences between Muslims and Westerners concern not politics but sexuality. Each side has a long history of looking at the other’s sexual mores with a mixture of astonishment and disgust. Here are some examples of customs and social attitudes from the Muslim side of the divide (in reverse chronological order) that have me, for one, shaking my head: Daniel Pipes has more>>

THE alleged abduction and gang rape of a woman was dismissed as harmless fun by a female defence lawyer in a Bahrain trial yesterday. Â Three men accused of the attack should be acquitted because young people often commit crimes for “fun”, without criminal intent, said lawyer Fatima Al Hawaj. Â Â More

Oct,2009: The kerala High Court has directed the Central and State governments to inquire into ‘Love Jihad’ or ‘Romeo Jihad’, a campaign propagated by Muslim organisations to convert girls into Islam under the pretext of love. The report has to be filed within three weeks.

Islam had taken the girl, who cannot be named for legal reasons, to a “dirty and smelly” flat above a snooker hall in Birch Lane,Â West Bowling, Bradford, before locking the door behind them, prosecutor Simon Phillips said. Â “This was to be the beginning of a lengthy ordeal lasting about nine hours, during which, he detained her in that flat. He threatened her and raped her,” he said. Telegraph

Jihadi Romeos promise to marry unsuspecting young girls within 6 months if they convert to Islam and take and dump these girls in the conversion centers. These Romeos then go for their next prey. These girls are subject to various tortures for weeks in these conversion centers. There is information that these girls are shipped to foreign countries after drugging them. They are shipped from the unmanned coasts of Kochi, Kozhikode, etc., to Mangalore, Goa, Chennai, Lakshadweep, from where they are taken abroad. They are taken to the Gulf countries under the false pretence of a job and forced into prostitution once they reach there.

It was found in investigations that many of the muslim girls found in police raids in the red light areas in Kochi and Kozhikode were actually Hindu-Christian girls who had converted to Islam in places like Mangalore and Bangalore.

The statistics of the Jihadi conversions in Kerala sinceÂ 2006 are shocking. The number of those converted in this way wasÂ 2876. Cases were registered in only 705 of such incidents. Kasargod tops the list of Jihadi conversions with a figure of 568. Only 123 incidents have been registered with the police. More>>

Kabul, Afghanistan (CNN) — A young boy dressed in women’s clothing, his face caked in make-up, dances the night away for a crowd of men.

The bells on his feet chime away, mimicking the entertainment and sexual appeal of female dancers. But there is no mistaking his pubescent body and face as he concentrates, focusing on every step in order to please his master and his master’s guests.

This all played out in a video that CNN obtained from a person involved in the parties.

The boy is but one youth among many throughout the country forced into an age-old underground tradition known as “bacha bazi,” or “boy play,” in which young boys are taken from their families, made to dance and used as sex slaves by powerful men. The number of boys involved is unknown — the practice has been going on for centuries, in a country where such practices are overshadowed by conflict andÂ war.

“It’s pretty much unappreciated by [the] society, unaccepted and illegal,” said Mohammad Musa Mahmodi of the Afghan Independent Human Rights Commission, one of the few organizations in the country working to end “bacha bazi.”

Islamic scholars have denounced “bacha bazi” as immoral but the practice continues inÂ Afghanistan, where the government is in the throes of an increasingly bloody battle with insurgent Taliban militants and is also working to recover from decades of conflict.

The abuse stays on the backburner of issues in Afghanistan. People are aware of it, but they don’t really talk about it. Almost everyone in the country is coping with some level of injustice, and they are just trying to survive.

It is widely known among the population that, most of the time it is commanders, high-ranking officials and their friends who partake in the abuse of the boys.

“It continues because of the culture of impunity and lack of legal provision against this practice,” Mahmodi explained.

Farhad,19, and Jamel, 20, are two grown dancers who were forced into “bacha bazi” about five years ago.

Farhad was 13 when his older neighbor tricked him into coming to his home. He was made to watch a sex tape and then raped. After the brutal assault, he was taken to another location where he was locked up and used as a sex slave for five months.

“I got used to him,” Farhad said, trying to explain why he stayed with his neighbor after the traumatizing experience.

“He would sometimes take me to parties, and sometimes other places. I was with him all the time,” he said.

In Afghan society the victims of rape and assault — both male and female — are often persecuted and punished rather than the perpetrator. The shame forces boys like Farhad to continue in leading such lifestyles, even when they have the chance to break away.

Jamel, Farhad’s friend and dance partner, is now married but he was the “bacha bereesh” — or “boy without a beard” — of a powerful warlord who has since left the country. He said the only reason he continues to dance is to provide for his younger brothers and sisters. 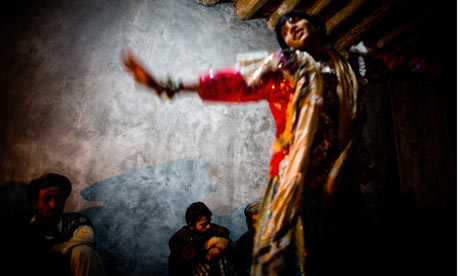 “I make them study, dress them, feed them. Any money I make I spend on my family. I don’t want them to be like this, be like me,” he said, brushing his shoulder length hair away from his eyes, framing his thin oval face.

Farhad and Jamel say their families know what is going on now but are powerless to stop it — in fact they need the money and income they make.

Both Jamel and Farhad look and act more like women than men, a trait that can be deadly in Afghanistan’s male-dominated society. Even the police can’t be counted on for protection.

Farhad said that he was taken from a party by four police officers one night and almost gang raped at the station Before their commander walked in and stopped the assault. But then, “He said if I wanted to be set free I should give him my money and my mobile,” Farhad said. “I had no real choice, so I gave him my money and mobile.”

The boys said they are continuously threatened, beaten and raped by men who attend the parties they dance at; parties fueled by alcohol and drugs.

“The nights we go out, we are scared,” said, Jamel, who is the more talkative of the pair and the one who more resembles a woman. “We always think about how we will be able to get out without someone attacking us.”

Despite the dangers, they continue to dance, making $30 for the night — a night that usually ends in assault — because they say it is the only thing they know and theirÂ only way to make money. There are no opportunities in Afghanistan for people like them.

And once branded as men who danced as women, there is no turning back.

“We are not happy with this line of work,” Jamel said. “We say that it would be better if God could just kill us rather than living like this.”