She says it’s official: theÂ Lancet is gonzo. Just like so many other multi-culti academic ‘standard bearers’, the rag is nothing more than biases tarted up as scientific work (lipstick on a pig and quite attractive if you like pigs).

Anyone see a problem here?

It’s official. Britain’s premier medical journalÂ Lancet has been completely Palestinianized. It no longer bears any relationship to the first-rate scientific journal it once was. PerhapsÂ Lancet is no longer a standard-bearer but has become a follower in the global movement in which standards have plunged, biases have soared, and Big Lies now pass for top-of-the-line academic, scientific work.

The post-colonial academy is itself thoroughly colonized by the false and dangerous ideas of Edward Said (please read my dear friend Ibn Warraq’s most excellent bookÂ Defending the West: A Critique of Edward Said’s Orientalism). However, I once believed that Said’s paranoid perspective had primarily infected and indoctrinated only the social sciences, humanities, and Middle East Studies. We now see his malign influence at work in a new article, just out today, by professors who work at the Department of Medicine at Harvard University; the Division of Epidemiology and Community Health at Minnesota University’s School of Public Health; The Boston University School of Medicine; the School of Nursing at the University of Medicine and Dentistry of New Jersey; and at the School of Social Work and Social Welfare at Jerusalem’s Hebrew University.

First, let’s follow the money. This study was funded by the Palestinian National Authority as well as by the Core Funding Group at the University of Minnesota. The Palestinian Authority is not a disinterested party. But even worse: The data was collected by the Palestinian Central Bureau. These are the people who told the world that Israeli soldiers shot young Mohammed al-Dura, committed a massacre in Jenin, and purposely attacked Palestinian civilians (who just happened to be jihadists dressed in civilian clothing or hostage-civilians behind whom the jihadists hid).

Second, let’s note that the study has a political goal which trumps any objective academic or feminist goal. (These researchers claim to have a “feminist” perspective). In my view, this study wishes to present Palestinian men as victims, even when those men are battering their wives. And, it wishes to present Palestinian cultural barbarism, which includes severe child abuse, as also related to the alleged Israeli occupation.

Third, therefore, the study has purposely omitted the violence, including femicide, which is routinely perpetrated against daughters and sisters in “occupied Palestine” and has, instead, chosen to focus only on husband-wife violence and only on couples who are currently married. The honor murders of daughters and sisters by their parents and brothers is a well known phenomenon in Gaza and on the West Bank.

I have written about some high profile cases before. “Souad”Â barely survived being set on fire by her fWest Bank family because she became pregnant out of wedlock by the man who promised to marry her; Israelis nursed her back to health and she fled the area for Europe, where she wrote a book about her near-death experience.Â Asma’a al-Ghoul, whom I interviewed in 2008, was fired for writing a series of articles about honor killings on the West Bank and in Gaza. These barbaric, misogynist, and femicidal customs are not due to any alleged political, military, or economic “occupation” by Israelis.

Fourth, if one is completely serious about violence against women, the researchers would have factored in the role of Hamas, which has “occupied” Gaza both militarily and religiously. Since they have done so, more and more (previously modern) women have been forced to veil; more child marriages as well as arranged marriages are now taking place. 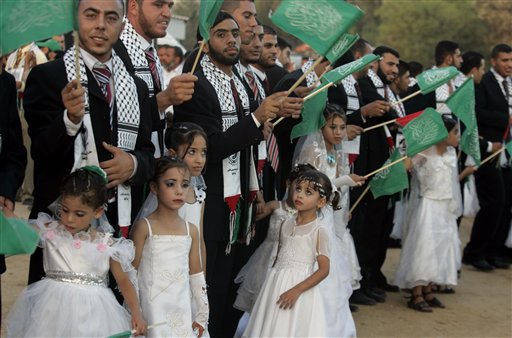 Palestinian girls stand in front of a line of grooms during a mass wedding ceremony in Beit Lahiya, northern Gaza Strip, Thursday, July 24, 2008. More than 100 couples took part in the event which was organized by the Islamic Association. (AP Photo/Hatem Moussa)