Ridley said Muslim women were expressing themselves both on spiritual and worldly matters and nobody can stop them or ignore them. Their fight is against the new world order created by imperialism and Zionism which has become a global threat.

Starting to get the picture of why Stockholm syndrome – former Taliban capturÃ©e Yvonne Ridley is a persona non grata in India? 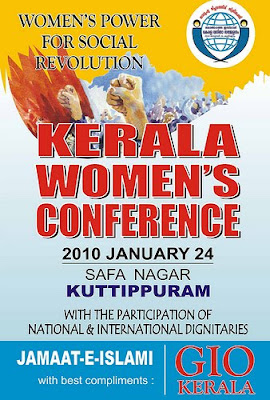 Wiki: Jamaat-e-Islami [1] (Urdu: Ø¬Ù…Ø§Ø¹ØªÙ Ø§Ø³Ù„Ø§Ù…ÛŒ, Jamaat-i-Islami, “Islamic Party” Jamaat, JI) is an Islamist political party that was founded by Sayyid Abul Ala Maududi on 26 August 1941, in Lahore, in what is today Pakistan.[2] and is the oldest religious party in Pakistan.[2]
Today sister organizations with similar objectives and ideological approaches exist in India, (Jamaat-e-Islami Hind), Bangladesh (Jamaat-e-Islami Bangladesh), Kashmir, and Sri Lanka, and there are “close brotherly relations” with Islamist movements and missions “working in different continents and countries”, particularly those affiliated with the mainly Arab pan-Islamic group known as Muslim Brotherhood (Jama’at al-Ikhwan-al-Muslimin).[2].

The JI envisions “iqamat-e-deen”, establishment of an Islamic administration governing by Islamic law. It opposes Westernization â€” including capitalism, socialism, secularism or such practices as bank interest, and liberalist social mores.[3]