Watch out for Paki lawyers:

LAHORE: Two male lawyers splashed acid on their female colleague while at the premises of the Multan District Court, a private television channel reported on Wednesday. The local police said Karimud Din Khilji advocate and his son Waqas Khilji advocate threw acid on a junior advocate, Nazima, in their chambers. The police said they had arrested the culprits, but were unsure as to what may have prompted the perpetrators to do such a thing. The victim suffered serious burn injuries and was shifted to the Nishtar Hospital in Multan. The Tundra Tabloids has more>> 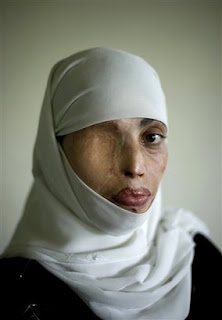 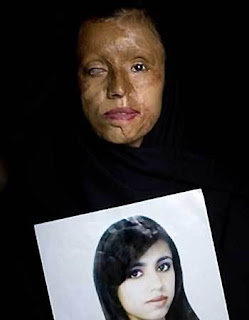 Eye on the World:

A 15-year-old girl in Egypt who converted from Islam to Christianity has been attacked with acid. Her father, who is also a Christian convert, helped protect her from serious injury during the attack. Both of them are the subjects of local death fatwas in the city of Alexandria.

Remember ObamaÂ yapping, in Egypt of all places, that “throughout history, Islam has demonstrated through words and deeds the possibilities of religious tolerance and racial equality”? Here’s a perfect example to illustrate just that.

(AINA) — Dina el-Gowhary, the 15-year-old Egyptian Muslim-born girl who converted to Christianity, was subjected to an acid attack, the latest in a string of failed attempts by Muslim fanatics against her and her father, 57-year-old Peter Athanasius (Maher el-Gowhary), who converted to Christianity 35 years ago. Several Fatwa’s were issuedÂ calling for the “spilling of his blood,” which makes their lives in constant danger in the face of the reactionaries and advocates for the enforcement of Islamic apostasy laws, which call for the death of a convert.

Dina said that three weeks ago as she ventured out from their hiding place in Alexandria with her father to get some bottled water, her jacket was set on fire due to acid being thrown at her. “My father quickly took my jacket off before the fire reached my arms. Ever since then I am terrorized to go out in the street, with or without my father.”

3 thoughts on “Religion of Acid Attacks”