But that’s not all:

AÂ song and dance group that has recently performed hate and violence promotion songs in the PA has been honored and turned into an official Palestinian national band by decree of PA Chairman Mahmoud Abbas. (Source) 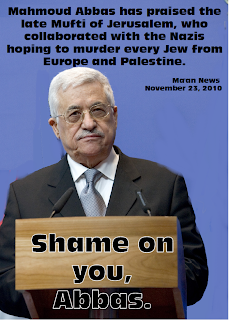 This week I had a post about how Mahmoud Abbas complimented the infamous Mufti of Jerusalem this week, calling him “outstanding” and wanting his role in history to remain in the forefront of Palestinian Arab consciousness.

Commenter abal31 links to a French and English website with a large amount of material on the infamous Mufti and his involvement with the Nazis.

For example, this small video clip of the Mufti’s meeting with Hitler:

And here’s a telegram from Heinrich Himmler to the Mufti in 1943: 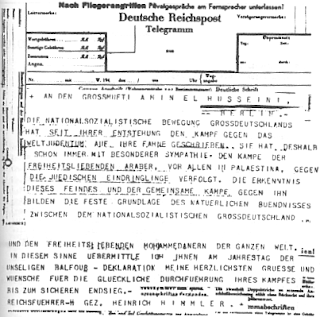 To the Grand Mufti: The National Socialist movement of Greater Germany has, since its inception, inscribed upon its flag the fight against the world Jewry. It has therefore followed with particular sympathy the struggle of freedom-loving Arabs, especially in Palestine, against Jewish interlopers. In the recognition of this enemy and of the common struggle against it lies the firm foundation of the natural alliance that exists between the National Socialist Greater Germany and the freedom-loving Muslims of the whole world. In this spirit I am sending you on the anniversary of the infamous Balfour declaration my hearty greetings and wishes for the successful pursuit of your struggle until the final victory.

He has lots more, including part of a documentary that details much more of the Mufti’s activities for the Nazis. It is worth checking out.

And it is worthwhile to remember that Mahmoud Abbas praised this genocidal filth just this week.