An update from Islam in Europe

Belgium’s Constitutional Court has ruled that the official Flemish Community schools network has the right to decide for itself whether the Moslem headscarf or other religious symbols may be worn in their schools. (source)

The dirty tricks of the Islamic community organizers 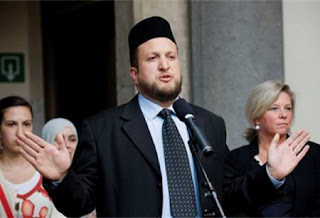 Here’s what happened: Â Karin Heremans explains how Muslims use deceit and the legendary ‘fanatical frenzy’ to whip up a crowd and to intimidate infidels, and when they realize they’ve been caught out they make an immediate about turn. Damage control al Islamiya:

A year ago Karin Heremans, principal of the Royal Athenaeum of Antwerp, was at the heart of a veil-ban storm, when sheÂ banned the wearing of headscarves in her school.Â  She now published a book on the matter, titled “Een tip van de sluier” (‘A tip of the veil’, which also means in Dutch ‘a tip of the iceberg’).Â  The following is an excerpt from the book:

The playground was crowded that evening.Â  About 50 people gathered in the inner courtyard.Â  It wasn’t clear who belonged to the school, who was a parent and who came to the school to start a row.

During my speech I said that I visited the al-Aqsa mosque in Jerusalem and there, out of respect for Islam, removed my shoes and put on a veil.

Then the playground exploded. I apparently stepped on some very sensitive toes. I wanted to talk of reciprocity, but I couldn’t finish my sentence.Â  There was calling, screaming..

I was later able to finish my story in order give the floor to imam Taouil.

To my complete surprise, he didn’t keep our agreement of several hours before that, but began to incite the children in the playground.

He urged the students not to go to the Antwerp and Hoboken athenaeums ‘as long as the headscarf ban is in force’. “Islam is starting to expand.Â  People are afraid of us.Â  That is the will of Allah.”

At which the whole playground began to chant the tabkir: Allahu Akhbar.Â  I saw the jaws of the journalists drop.Â  Precisely because they’ve gone through that moment, the press always remained very kind to me.Â  They could see there why I made that decision.Â  After Taouil a few more extremists stirred up the issue and recited Koran verses.

If they would send out those images, Flanders would go nuts, I thought.Â  It speaks for the sense of responsibility of the press that they didn’t do that.

After the speeches, several progressive Muslim went to speak to the journalists to beg them not to broadcast the images.Â  “What will people think of us otherwise?”

Muslims came crying to me, to apologize.Â  “Excuse us, ma’am, but we aren’t like that.”

2 thoughts on “Belgium: the Will of Allah & the Dirty Tricks of the Islamic Community Organizers”